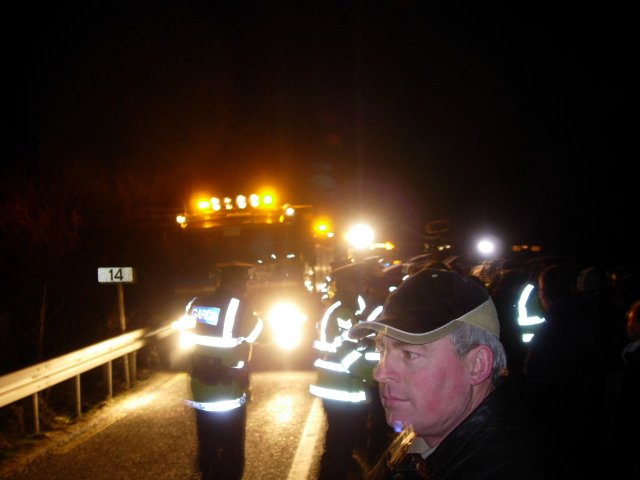 Gardai plough into crowd to assault and intimidate 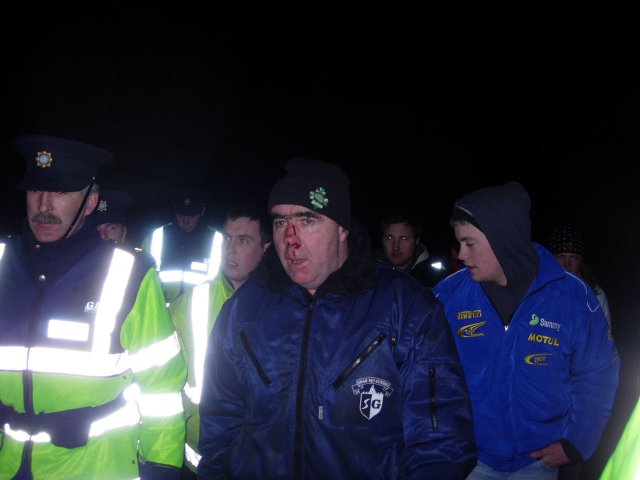 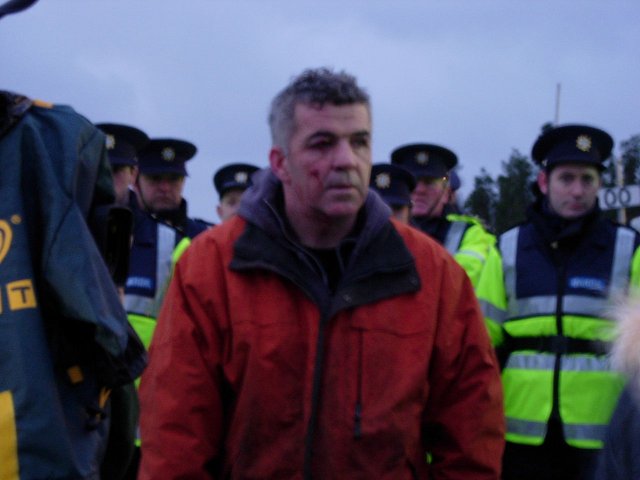 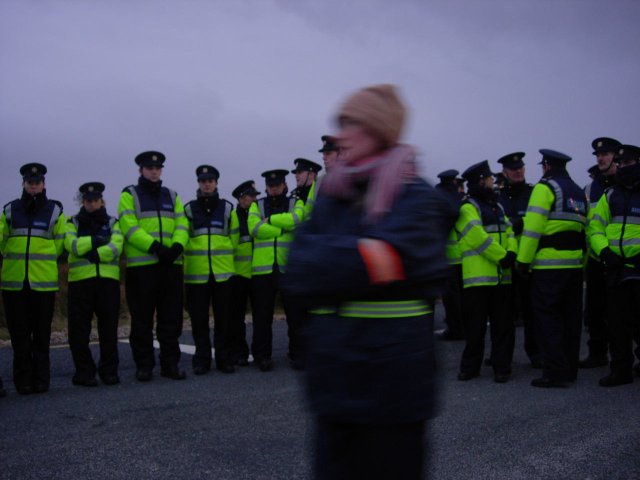 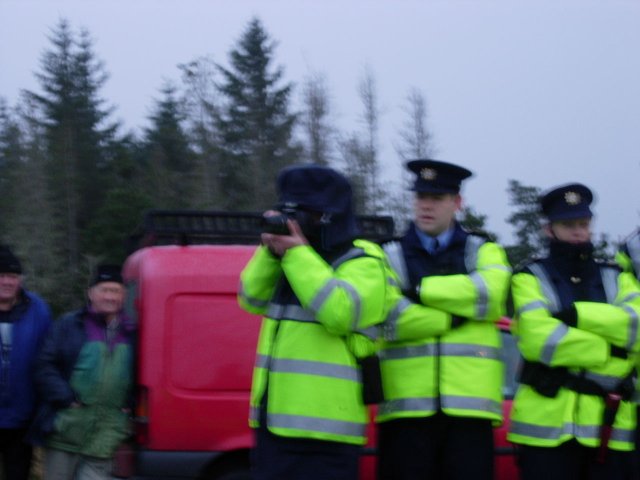 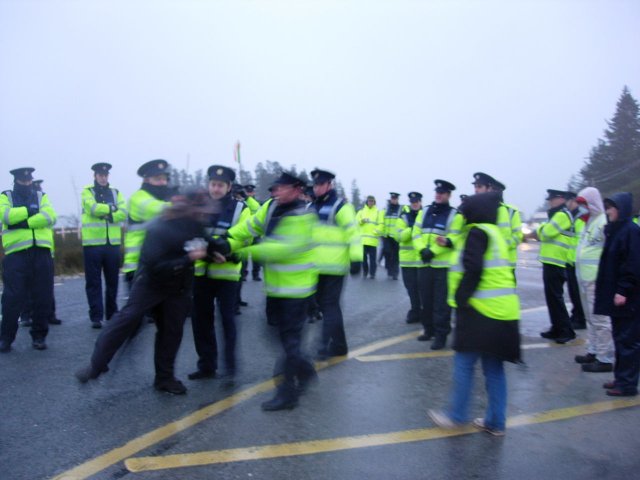 ''This is for your own safety'' 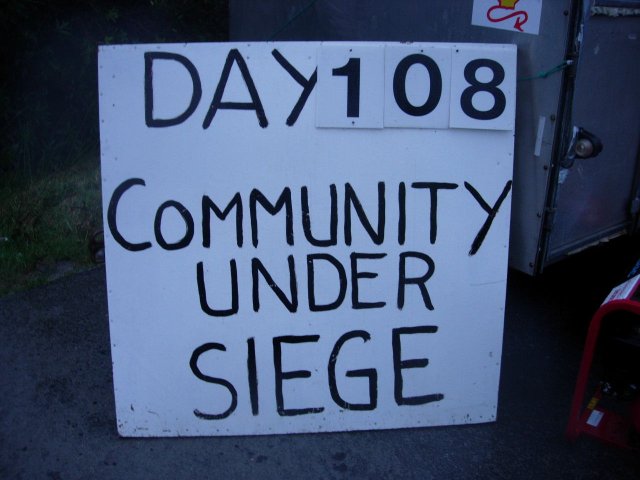 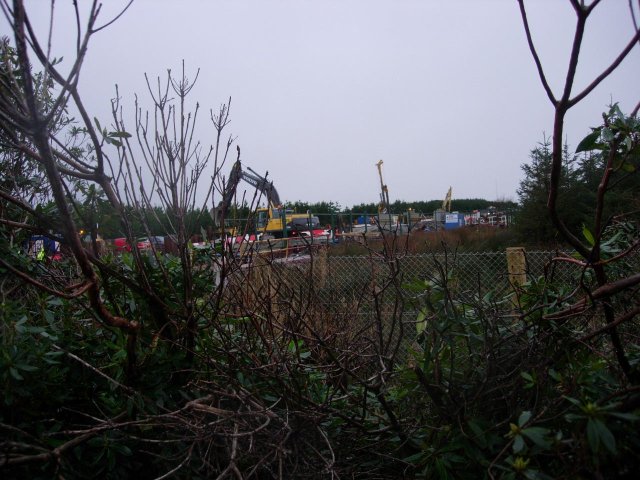 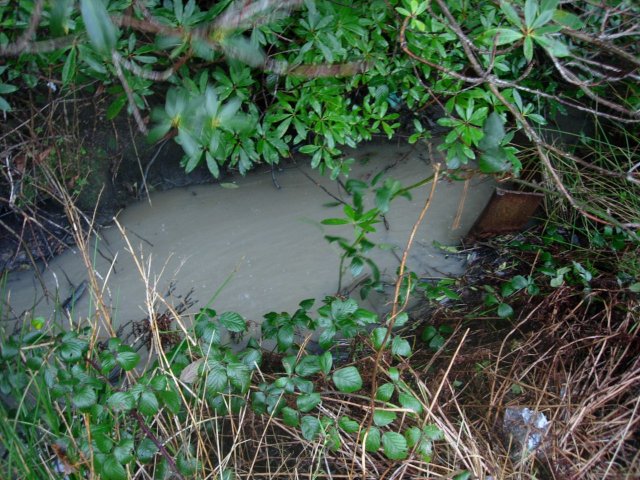 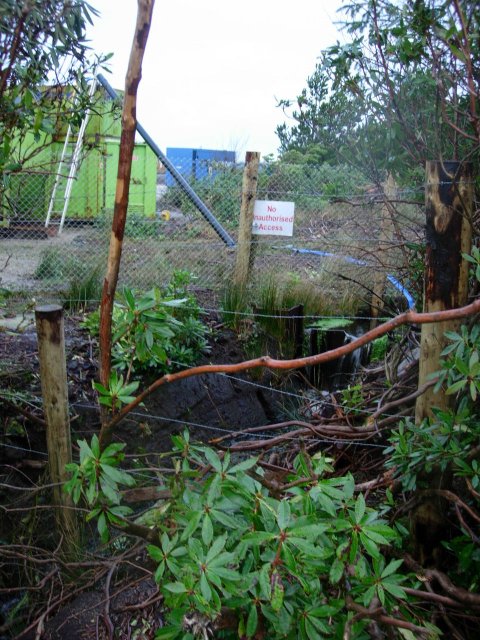 Untreated water being pumped off site from truck wash 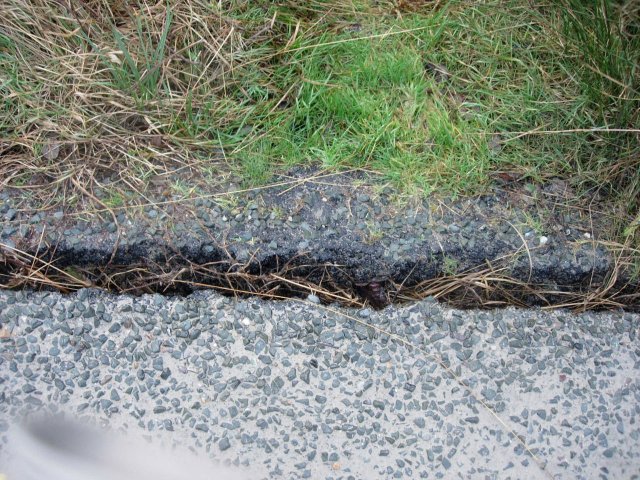 Friday 19th January 2007.
Today a good crowd of protestors gathered at the usual rendezvous, approx 60+ people. The crowd was buoyed by the presence of a member of Global Community Monitor, over from the states, and a film crew travelling with him. At 7.30 people proceeded up the road, some wearing white jump suits with chemical contaminants inscribed on the front, poisons which the Ballinaboy terminal would pollute the local area, fresh water and sea with. The crowd was lead with a large banner reading Corrib Terminal Illness.

As the crowd passed over the narrow bridge tempers frayed and to nobodies surprise the Gardai ploughed into the protestors, shoving them every which way. At this point two Gardai held Pat’s arms while another punched him in the face several times. Similarly his brother Martin was seriously assaulted, suffering cutting and bruising to face and eye. But as the dawn has not yet broken capturing any image of this is virtually impossible, especially given the number of Gardai there to hide each others activities and deny same.

It’s very hard to ascertain if there is any logical point to the Gardai activities with regard to wading in and assaulting all around them as other than to bully and injure people it serves no practical purpose. Usually their excuse for pushing and shoving is to ensure your safety and make sure you are on the other side of the white line so none of Shells workers or trucks can possibly be delayed for even a second. However as can be seen in the first photo some Gardai are nearly on the other side of the road, where there is no hard shoulder as this is on the bridge, and still they are pushing, shoving and assaulting people.

Yesterday after the Gardai headed off for their breakfasts, leaving the trucks to fend for themselves, local residents blocked access to the site, holding up stone trucks for a period of time. Security appeared to panic somewhat closing and locking the site gates before Gardai with out a commanding officer appeared on the scene to usher in the stalled trucks.

Water quality continues to be a serious issue, despite Co.Co. assurances that it is fine. Images below show water leaving the Ballinaboy site, some clearly untreated and looking very similar to last year, silver grey, when it was found to be heavily contaminated with aluminium. The main outfall area from the site looks marginally better, where the water is at least supposed to have been treated by this point, however it is also clearly looks nothing like drinking water quality and exhibits some silver grey colouring. Despite the fact that all water leaving the site is supposed to be treated before leaving site you can clearly see the water from the truck wash at Gate 3 being pumped straight into exiting drains.

The past 3 days have seen members of Shell to Sea handing out leaflets at the Shell greenwash events in Castlebar and Ballina. Very few people attended these events, and numbers must have been doubled or even trebled by the attendance of 2 school groups, 1 from secondary school and 1 from primary school, never to early to start brain washing.
Our own presence was welcomed by many people passing by and many who did go in to see Shells expensive PR work were firmly behind the stance of Shell to Sea. As we handed out information leaflets and chatted to people 1 passerby even went into the hotel and brought out a tray of steaming hot whiskeys!