National Grid is attempting to construct a high pressure, high volume gas pipeline right across South Wales to connect two new liquid natural gas (LNG) terminals at Milford Haven with the existing national gas distribution network at Tirley, Gloucestershire. Local people have campaigned against the project on environmental, ecological and safety grounds, as well as complaining about the lack of proper consultation. The 'official' routes for their many objections having been exhausted, protesters launched a campaign of direct action against the pipeline at the end of last year, with several protest camps set up along the proposed route [Reports: 1 | 2].

January has seen new camps and more direct action, which have successfully held up construction work at various points along the pipeline route. Activists from across the country are supporting local efforts to protect the beautiful Welsh countryside from this impending environmental disaster. 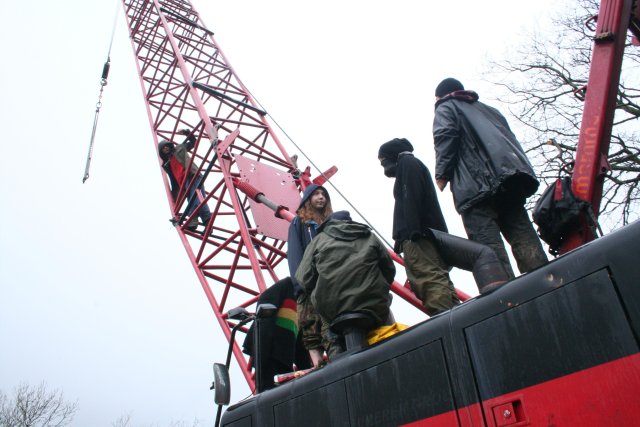 This pipeline is just one stage in a multinational project to bring LNG to the UK from the Middle East via what will be the biggest LNG terminal in the world at Milford Haven. South Hook LNG is a joint project between Qatar Petroleum and ExxonMobil, while a second, smaller terminal, Dragon LNG, is run by a consortium in which BG Group is the major partner.

Concerns about and objections to the £700 million pipeline project are numerous: the UK is committing to decades of reliance on fossil fuels imported from thousands of miles away rather than investing in renewable energy projects at home; laying the pipeline will cut a swathe the width of a motorway through the countryside, including a part of the Brecon Beacons National Park, recently designated a UNESCO National Geopark; the planned route includes unstable areas liable to landslide and earthquake, which are deemed too dangerous for mains gas to be piped to local homes; the pipeline design is untested and will operate at higher pressure than existing gas pipelines; and so on [more objections].

Local campaigners from along the route of the pipeline are working together as the Safe Haven Network, supported by climate change action group Rising Tide, along with many other groups and individuals. Seasoned activists with experience of direct action working alongside committed local campaigners with detailed knowledge of the terrain appears to be a powerful combination. Ongoing direct action is happening in and around Trebanos, at Milford Haven and at Cilfrew, and looks set to spread to other places along the pipeline route. In the past couple of weeks, work on the site has been held up repeatedly by the protesters, who have employed walking and static blockades, lock-ons and occupation of cranes and other machinery. Some of these actions have met with violent responses from construction site workers, one of whom ignored safety considerations to move a crane with an activist locked on by his neck at a considerable height from the ground.

More activists are arriving in South Wales every day, and call-outs have been made for others to join the campaign [invitations: 1 | 2].

I would like to clarify one point. It is Safe Haven Network that first began the campaign along the pipeline route, not Safe Haven. We are not the same group. 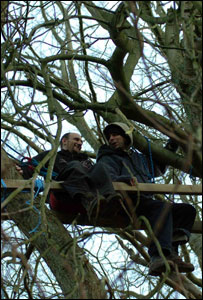 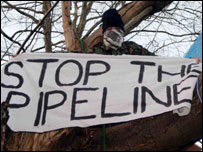