When police crept down to Parliament Square in the middle of the night last May and removed most of Brian Haw's display, the were acting unlawfully. Superintendent Terry produced an undated document in Court signed by the Commissioner, delegating powers to him to impose conditions on demonstration. But Judge Purdy ruled today that the conditions were unlawful, the delegation was unlawful and so the raid must have been unlawful too. 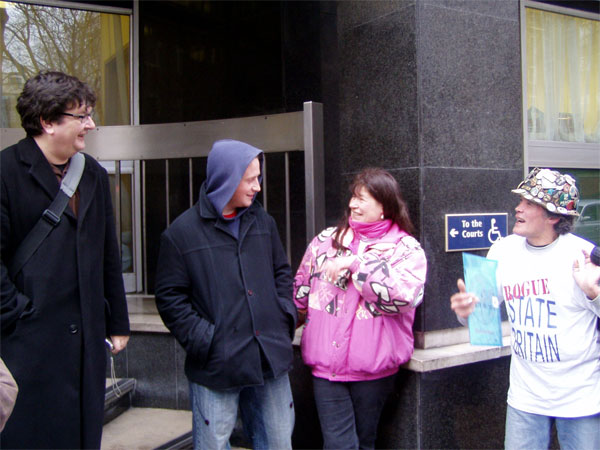 One week on, Brian was at Westminster Magistrate's Court on Monday to hear whether he had a case to answer for allegedly breaching conditions imposed on his demonstration last May.

His defence had asked for the case to be thrown out on two grounds, and today, District Judge Purdy agreed with both.

First, the conditions were written by Superintendent Terry, who had no authorization under the Serious Organised Crime and Police Act to do so.

Secondly, the conditions were not sufficiently clear for Brian to comply. Indeed the Judge commended Brian’s defence barrister, Ian McDonald’s “masterclass of demonstrating the absurdity” of those conditions.

After the judgement, Terry handed over an envelope containing new conditions signed by an Assistant Commissioner, thus preventing Brian from re-instating his former display.

Two supporters, Maria and Martin, had tried to stop Police that night by climbing on a police freight container. Their trial for obstruction was adjourned for two weeks and it seems likely the prosecution may drop charges as the police now appear to have been acting unlawfully at the time.

In another court, Barbara Tucker and Steven Jago face charges relating to incidents at Charing Cross Police Station when Barbara attended bail. She has been reported for summons under SOCPA more than seventy times, but the only case tried so far was thrown out by the judge ‘void ab initio’, which is a legal phrase denoting a case should never have been brought.

Barbara is wading through a string of pre-trial hearings, but continues her peace vigil around Parliament Square and Downing Street, although the police have failed to authorize it under the Act.