Corporate Control of the Media 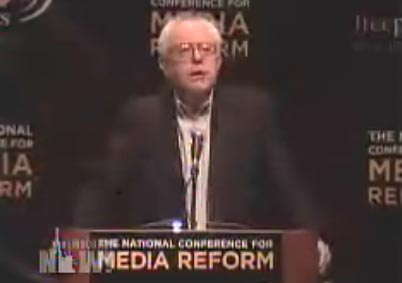 If You Are Concerned

Tomorrow night President Bush will give his State of the Union address before a joint session of Congress. Last weekend, Vermont Senator Bernie Sanders gave what could be described as an alternate State of the Union before thousands gathered in Memphis, Tennessee at the third National Conference for Media Reform.

Sanders is an Independent who was elected to the Senate in November of 2006. He is the country's first self-described socialist to be elected to the U.S. Senate.

Before becoming Senator, Bernie Sanders served in the House of Representatives for 15 years where he was the longest-serving Independent in modern history.

AMY GOODMAN: This is Bernie Sanders speaking at the National Conference for Media Reform.

SEN. BERNIE SANDERS: We have already taken a giant step forward in transforming our country, because what we have done -- and the size of this conference indicates our success -- we have begun the long road to make media a major political issue in America. And more and more, in campaigns and in non-campaigns, when people who are running for office go before the public and, as been mentioned, when they talk about healthcare or the environment or the dozens of other important issues, somebody in the front of the room is going to raise their hand and say, “Well, what do you think about corporate control over the media? What are you going to do about that?” So, to the degree that we have already raised consciousness on this issue, we should be very proud. But, obviously, we know that we still have a very, very long way to go.

I happen to believe that we are reaching a moment when critical mass is kicking in. Because of your efforts, because of a growing grassroots movement all over America, what I can tell you is that not only in the House is there a media caucus where this issue is now going to reach a higher level than ever before, I can tell you that it's going to happen in the Senate, as well. I can also tell you, absolutely, that we will not succeed unless you are there, unless there is a strong grassroots media, which demands fundamental changes in media today and the end of corporate control over our media. We've got to work together on that.

Now, you are going to hear from a lot of folks who know more about the details of the media than I do, but what I do know a lot about is how media impacts the political process, what media means for those of us who day after day struggle with the major issues facing our country and a goal of trying to improve the quality of life for all of our people.

Let me just talk about a few. Four years ago, George W. Bush told the American people that a third-rate military power country called Iraq had weapons of mass destruction and that they were about to attack the United States of America. That's what he told us. I can tell you, because I was there in the middle of that, in opposition to that -- that day after day, those of us who oppose the war, among many other things, would be holding national press conferences that you never saw. I can tell you, as you know, that hundreds of thousands of people in our country were so disgusted with the media simply acting as a megaphone for the President that they turned off American media, and they went to the BBC or the Canadian Broadcasting Corporation.

In terms of the war in Iraq, the American media failed, and failed grotesquely, in exposing the dishonest and misleading assertions of the Bush administration in the lead-up to that war, and they are as responsible as is President Bush for the disaster that now befalls us. Media plays a role. And the disintegration of Iraq, the death of hundreds of thousands of Iraqis, of over 3,000 Americans, the cost of hundreds of billons of dollars out of our pockets -- directly related to the failure of the media.

Let me touch on another issue, an issue that I am deeply involved in. If you were to ask me what the most significant untold story of our time is, in terms of domestic politics, I would tell you very simply that that story happens to be the collapse of the American middle class. Simply stated -- I don’t want to speak at great length on it, but simply stated, despite an explosion of technology, huge increase in worker productivity, tens of millions of our fellow Americans have seen a decline in their real wages and are working longer hours for lower wages. In fact, what you probably don't know is that the working people in our country work longer hours than do the working people in any other industrialized nation on earth.

How did that happen? How did it happen today that a two-income family has less disposal income than a one-income family did thirty years ago? How does it happen that thirty years ago, one person working forty hours a week could earn enough money to take care of the family; now, you need two, and they're still not doing it? Now, one might think that this is an interesting story. One might think that globalization and disastrous trade policies, which have lowered the standard of living of millions of American workers, might be a story that should be covered.

What I can tell you is that when NAFTA was first passed over ten years ago -- and I strongly opposed NAFTA -- we did some research. We did some research. We went through the editorial pages of every major newspaper in America, every single one of them was prone after, and today, despite a $600 billion trade deficit, the loss of millions of good-paying blue-collar and white-collar jobs, these corporate titans are still in favor of unfettered free trade, despite the disastrous impact it has had on America's workers.

People working long hours, people working for lower wages, they turn on the television set, they do not see that reality. What they see is the issue is personal responsibility. You can't afford healthcare? You're losing your pension? Then the problem is with you. Work a little bit harder. It is not a systemic problem. It is not a problem that can be solved by government. It is not a problem which asked you to be involved in the political process. You are the only person who can find a job that pays you a living wage. That's your fault! And you are the only person who can’t find a job that provides you with healthcare. That's your fault! And you're the only father who can't afford to send your kid to college. That's your fault! Don't get involved in the political process. It won't do any good. So people turn on the television -- they’re hurting, they're exhausted -- they do not see a reflection of their reality in the media. They do not understand that participation in the political process can bring about change, and that is not by accident.

When we wake up in the morning and we brush our teeth, for better or worse, we see our own reflections in the mirror. When we turn on the television, somebody is providing us a mirror to the world, and what we want is that mirror to reflect the reality of ordinary people and not the illusions of a few.

AMY GOODMAN: We return to the Vermont Independent Senator Bernie Sanders, speaking at the National Conference for Media Reform in Memphis, Tennessee.

I can remember in the early 1990s, during the early years of the Clinton administration, there was a lot of debate about the need for real healthcare reform. Do you happen to know which piece of legislation in the House had far more support than any other concept? You probably don't. It was legislation to support a single-payer national healthcare system. That's a fact. But, as somebody who was involved in that fight, we would turn on the television and say, “Hey, single payer has more support than any other concept. Are you going to talk about single payer?” “Oh, no, no. We don’t talk about single payer. It's not feasible.” Virtually no coverage about what a single-payer concept is about. Virtually no coverage about international healthcare and how other countries are doing a better job than we are doing.

In terms of the environment. In terms of the environment, if we are told over and over again that there is a serious scientific debate about the causation of global warming or whether global warming actually exists, it has an impact upon our consciousness. Why should we break our dependency on fossil fuels, why should we move to sustainable energy, if there is a debate among the scientific community? And that is, in fact, what you hear in the media. Well, you know what? There is no debate among the scientific community.

Now, here's an issue that I’m sure you see on the TV almost every night -- it probably bores you, you see it so much -- and that is that the United States today has the most unfair distribution of wealth and income of any major country on earth. I was joking. You don't see that on television very often. Now, here is at issue, you know, which is of enormous significance from an economic point of view, as well as a political point of view, as well as a moral point of view. Richest 1% of the population in America owns more wealth than the bottom 90%. Richest 13,000 families earn more income than do the bottom 20 million families. In many ways, in my view, we are moving toward an oligarchic form of society. Do you think that maybe this is an issue that should be thrown out there on the table? Do we think it's a good idea that so few have so much and so many have so little? But that is an issue that is beyond the scope of what establishment media is literally allowed to discuss.

Now, I have been in politics for a long time. I have been asked a thousand questions by media. Not one member of the media has ever come up to me and said, “Bernie, what are you going to do to deal with the outrage of America having the most unfair distribution of wealth of any country on earth? What are you going to do about it?” Have you ever heard any political leader ever being asked that question? Why not? Why is that issue outside of the scope of what we are allowed to talk about?

Bill Moyers: "Big Media is Ravenous. It Never Gets Enough. Always Wants More. And it Will Stop at Nothing to Get It. These Conglomerates are an Empire, and they are Imperial."

The Myth Of The Liberal Media

The Myth Of The Liberal Media

The propaganda of model news featuring Noam Chomsky, Edward Herman and Justin Lewis. How the media really work and who decides what is news.