Manila. On the 20th anniversary of the Mendiola massacre 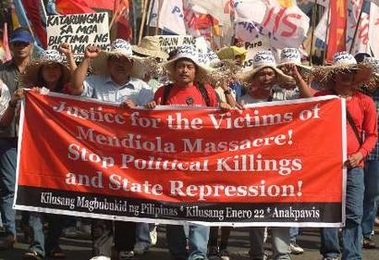 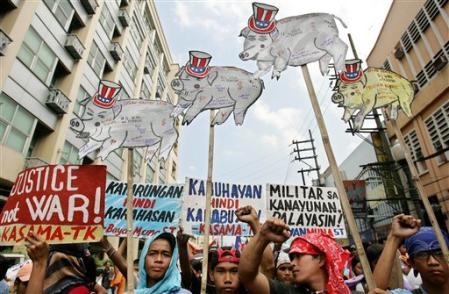 Still No Land, No Justice

Twenty years after the infamous Mendiola massacre, the victims and their families have yet to attain justice. The government did not give them any assistance even for burial expenses. Instead, they were threatened and harassed by government security forces. But on January 22, the relatives, friends, neighbors and colleagues of the victims will return to Mendiola to install a marker symbolizing their continuous quest for justice.

Josephine lost her husband Ronilo, then only 29, in what is known as the most violent dispersal of a rally at Mendiola Bridge (now Don Chino Roces Bridge) – the Mendiola Massacre. The violent dispersal on that fateful afternoon of January 22, 1987 killed 13 farmers and injured 51 others.

The young mother also recalled how she had wanted to join her husband and thousands of other farmers from different provinces in Central and Southern Luzon but had to stay at home to look after her two sons aged two and five. Josephine said she only learned from a cousin, who got home alive after the Mendiola protest, that Ronilo was rushed to the hospital.

“Pero hindi naman sinabi sa akin na patay na,” (But I was not told that he was already dead.) she said.

Even as night already fell that day, Josephine said she traveled more than two hours to be at her husband’s side at the Philippine General Hospital (PGH) in Manila in the hope that Ronilo was still alive. “Inabutan ko sya sa morge na,” (When I arrived he was already at the morgue.) she said, fighting back tears.

Before he died, Ronilo was a harvester of fruits and palay (rice grains) in a small farm in this town. He got a one-third share of the harvest. Josephine was forced to take over his work to be able to raise her two young sons.

Twenty years after, Josephine and her two sons still live in this remote village. Her elder son managed to finish secondary school and now works as a security guard while her younger son stopped school when he was in Grade 5. “Wala na akong ipaparal sa kanya,” (I can no longer afford to send him to school.) Josephine said. It is now her younger son who works as a harvester in the same farm.

Josephine said it is a continuous injustice to her and her children that they remain landless to this day. It is ironic, she explained, because during the Mendiola rally, the farmers were demanding genuine agrarian reform from the newly installed Cory Aquino government.

It can be recalled that Aquino, who is an heir to the landlord Cojuangco clan in Tarlac province, declared agrarian reform as the centerpiece of her program when she ran against the dictator, Ferdinand Marcos, in the 1986 snap elections.

The same is true with Teresita Arjona, 48, wife of Danilo Arjona who also perished when anti-riot personnel from the Western Police District (WPD), and elements from the Integrated National Police (INP) and the Philippine Marines fired a hail of bullets at the protesters that day. Teresita, was with her husband at the Mendiola rally in 1987.

Teresita had to carry the burden of raising her five children alone working as a farmer harvesting fruits and palay in their hometown in Liliw, same province. Her eldest was only 13 then while the youngest was only five years old.

Showing an old, faded family photo, the last one taken three months before Danilo’s sudden death, Teresita related how she lost sight of her husband when she ran towards the direction of the Liwasang Bonifacio near the Philippine Post Office where others had taken refuge. She said she went home in tears without her husband. Upon hearing from the radio that Danilo was among those killed, she rushed back to Manila and found her husband at the Mt. Carmel Church in Quezon City where the funeral for the 13 victims were held for five days. The families were then allowed to bring their relatives home to bury them.

Since her appendix was removed in 1998, Virginia Aribe, 68, said she has been suffering from poor memory. In fact, she could not even remember the age of her daughter, Adelfa, when the latter got killed at Mendiola two decades ago.

But she could not forget the pain of losing her child, who was barely in her teens in 1987, “Namalastaga ako,” she said., “Dinamdam ko yun, e.” (I was depressed. I really grieved over her death.)

Virginia, who now works as a laundry woman in their hometown in Sta. Cruz, same province, said it was Adelfa who took care of her and helped her in the farm after the death of her husband, Milanio

Virginia said she saw her daughter in the evening news: “Naka-jacket sya, hinihila sya ng mga tao tapos sumisigaw sya ng ‘Inay!’ Tapos binaril na sya.” (She was wearing a jacket and was being pulled back by her companions when she shouted “Mother!” before she was shot.)

Aquino issued Administrative Order No. 11 (AO No. 11) creating the Citizen’s Mendiola Commission headed by then Supreme Court Justice Pedro Abad Santos. The commission recommended on Feb. 27, 1987, the prosecution of four unidentified persons in uniform who were caught on film and in photographs firing in the direction of the marchers. It also recommended the prosecution of all the commissioned officers of both the WPD and the INP Field Force, who were armed during the incident.

On Feb. 10, 1988, the House Committee on Human Rights recommended the "expeditious payment of compensation" to the victims.

The victims' families and the survivors, on the other hand, filed charges against the government and several police and military officers for damages amounting to P 6.5 million ($132,937 at the current rate of $1=P48.895). Among those named in the case were former Pres. Fidel Ramos, who was then National Defense Secretary; former AFP Chief of Staff Gen. Renato de Villa; former WPD Superintendent B/Gen. Alfredo Lim; Sen. Rodolfo Biazon, then chief of the Philippine Marines; B/Gen. Brigido Paredes, former Marines commandant; Col. Edgar dela Torre and Col. Romeo Monfort of the defunct Capcom (Capital Command); and former PNP Chief Cesar Nazareno, then WPD deputy superintendent.

On May 31, 1988, Judge Edilberto Sandoval of Branch 9 of the Manila Regional Trial Court dismissed the class suit.

On August 8, 1988, the Supreme Court upheld the lower court’s decision citing the government's immunity from suit.

“Binale-wala nila ang pagkamatay ng anak ko,” (They completely disregarded the death of my daughter.) Virginia said while recalling how the case they filed against the murderers of her daughter and 12 others was dismissed.

Virginia, Josephine and Teresita all said they did not receive any form of compensation from local or national government agencies. “Kahit abuloy wala silang binigay,” (They did not even give us anything to cover the funeral expenses.) said Virginia.

Instead of receiving assistance, Purita Yumol, 52, wife of victim Roberto Yumol, said they even received threats and experienced harassments from government agents a year after the tragic incident in Mendiola.

Purita said more than 10 soldiers strafed their house in this town one evening in 1988. When two of her children went out to look what the shooting was all about, Purita said, the soldiers barged into their home and asked the Yumol family if they were hiding New People’s Army (NPA) guerillas.

On the 20th anniversary of the Mendiola Massacre on Tuesday, Jan. 22, Virginia, Josephine, Teresita, Purita and the rest of the families of the massacre victims would again troop to Mendiola to install a marker at the foot of the Don Chino Roces Bridge in memory of the 13 martyrs of Mendiola: Danilo Arjona, Leopoldo Alonzo, Adelfa Aribe, Dionisio Bautista, Roberto Caylao, Vicente Campomanes, Ronilo Dumanico, Dante Evangelio, Angelito Gutierrez, Rodrigo Grampan, Bernabe Laquindanum, Sonny Boy Perez, and Roberto Yumul.