On 19/02/2005 the Audiencia Nacional issued a decision whereby it stated the youth organisations Jarrai, Haika and Segi are not terrorist organisations because they do not use weapons or explosives, although the Court did declare them illegal and sentenced 24 young Basques to between two and half years and three and a half years in prison. This decision was appealed by the defence and the Prosecution, for different reasons, before the Supreme Court. 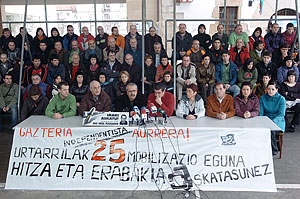 The Prosecution, specifically, defended its aim was to obtain new jurisprudence which could be applied in other proceedings.

On January 19 2007, the Supreme Court published its decision, although it gave itself time until February 8 to publish the legal arguments on which the change is based. Indeed, three of the judges believe these organisations are “illegal associations which amount to a terrorist gang, organisation or group” and gave 23 young Basques 6 years in prison whilst they acquitted one. A further two members of the Tribunal voted against this decision.

The Audiencia Nacional has issued arrest orders to the Policía Nacional, the Guardia Civil and the Ertzaintza, several of which have been fulfilled already.