100,000 people.
The coalition "United for Peace and Justice" organized the march and pledged to hold more demonstrations in the future. 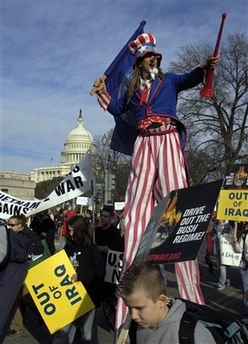 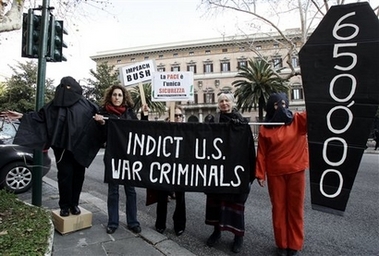 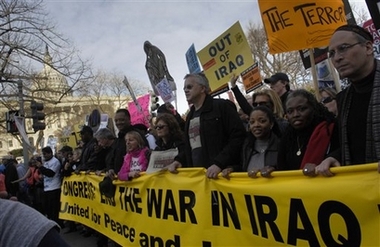 The Washington Post reported authorities have pegged the crowd at about 100,000 people, including venerable war opponents such as Jane Fonda, Susan Sarandon, Sean Penn and the Rev. Jesse Jackson.

Penn chided Bush for what he said was trying to make Americans afraid.

"Remember a time when presidents said 'the only thing you have to fear is fear itself' -- now we have a president who says 'be afraid; be very afraid.' Well, we are not afraid," Penn said.

The coalition "United for Peace and Justice" organized the march and pledged to hold more demonstrations in the future.

Saturday's protest consisted of several events going on simultaneously. One rally, run by a women's peace group called "CodePink" was held on Pennsylvania Avenue and included a large bin filled with shoes they said were representative of Iraqi civilians that have died since the war started.

The March on Washington was FABULOUS! I wrote it all up with pix here:

PS. There were only about 30,000 people there, not a hundred thousand.