"[Jesus] said we should love our enemies as controversial as that may be," he said. 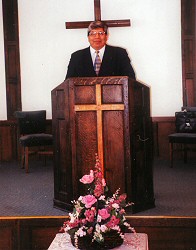 Even a holocaust in Iraq?

AUSTRALIA: Baptist leaders say a sign displayed on many of its churches, reading "Jesus loves Osama", is not meant to cause offence.

[What about a distraction?]

A number of churches have displayed the sign that also quotes the Bible saying "Love your enemies and pray for those who persecute you".

[Even the John Howard govt, his cronies, and the Coalition of the Killing?]

"[Jesus] said we should love our enemies as controversial as that may be," he said.

[We must really love the Coalition of the Killing then because some people were stupid enough to elect them back into public office? That's how much they love them? See!]

Alan Soden "The bottom line to me is we're all sinners.

[Some a lot worse than others hey Alan? Like 655,000 dead in the Iraq war. Then why are some people sent to jail and other not so unlucky?]

Alan Soden "He loves us all, no matter who we are or what we may've done."

[Even a holocaust in Iraq? Hey Alan? And even if you blamed the wrong bloke, Osama 'where has he bin lately?' And whose just the scapegoat demonic and a figment of George W Bush's sinister imagination? And even if your Christian church is just a 'propaganda distraction for the mass media and mass murderers, hey Alan?]