The Origins of Iran's Nuclear Plants

Although it now seems that the preferred argument to justify expanding the US-UK imperial slaughter in the Middle East to Iran is the alledged support for insurgents in Iraq, this wasn't the case until recently — the alleged Iranian nuclear weapons programme was the justification, and the nuclear plants the planned targets. 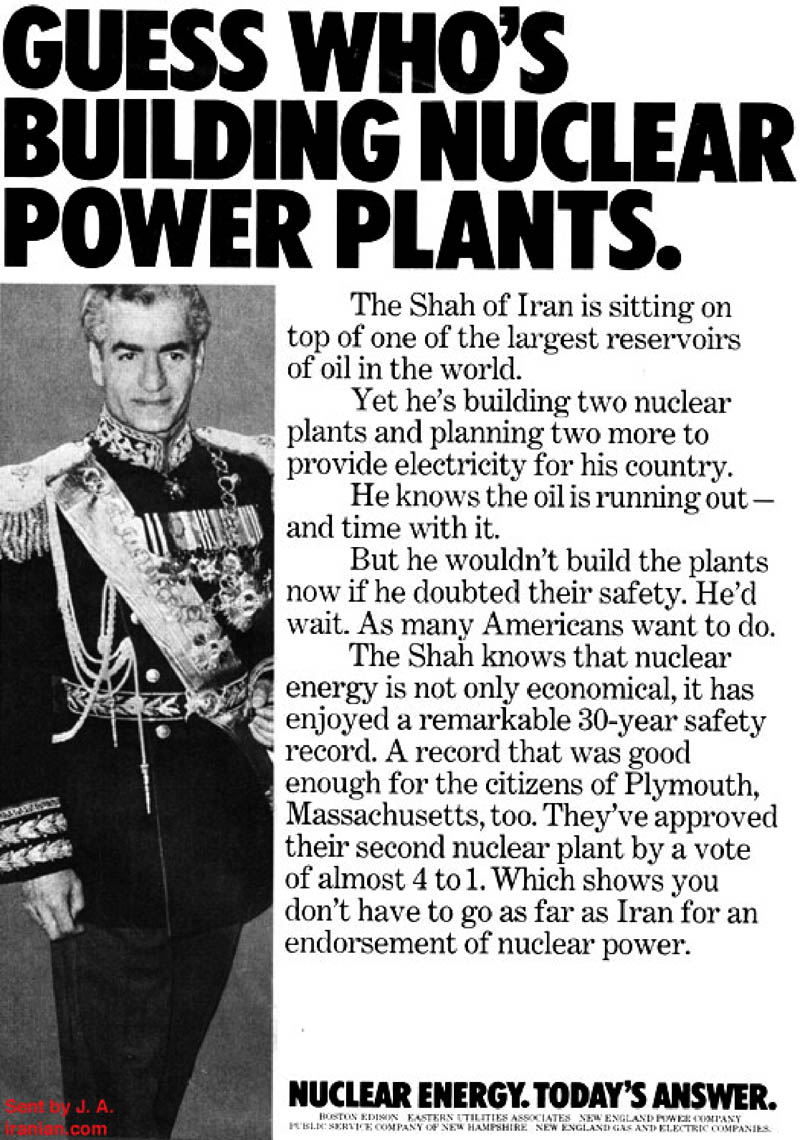 Using the Shah to Promote Nuclear Plants in the 1970's

But what is the origin of the Iranian nuclear industry? Consider the above advert from the 1970's featuring the Shah of Iran, which was paid for by a group of nuclear industry contractors.

And consider this extract from an article in the Washington Post:

Lacking direct evidence, Bush administration officials argue that Iran's nuclear program must be a cover for bomb-making. Vice President Cheney recently said, "They're already sitting on an awful lot of oil and gas. Nobody can figure why they need nuclear as well to generate energy."

After balking initially, President Gerald R. Ford signed a directive in 1976 offering Tehran the chance to buy and operate a U.S.-built reprocessing facility for extracting plutonium from nuclear reactor fuel. The deal was for a complete "nuclear fuel cycle" -- reactors powered by and regenerating fissile materials on a self-sustaining basis.

That is precisely the ability the current administration is trying to prevent Iran from acquiring today.

The Ford administration -- in which Cheney succeeded Rumsfeld as chief of staff and Wolfowitz was responsible for nonproliferation issues at the Arms Control and Disarmament Agency -- continued intense efforts to supply Iran with U.S. nuclear technology until President Jimmy Carter succeeded Ford in 1977.

That history is absent from major Bush administration speeches, public statements and news conferences on Iran.

In an opinion piece on Iran in The Post on March 9, Kissinger wrote that "for a major oil producer such as Iran, nuclear energy is a wasteful use of resources." White House spokesman Scott McClellan cited the article during a news briefing, saying that it reflected the administration's current thinking on Iran.

In 1975, as secretary of state, Kissinger signed and circulated National Security Decision Memorandum 292, titled "U.S.-Iran Nuclear Cooperation," which laid out the administration's negotiating strategy for the sale of nuclear energy equipment projected to bring U.S. corporations more than $6 billion in revenue. At the time, Iran was pumping as much as 6 million barrels of oil a day, compared with an average of about 4 million barrels daily today.

Documents show that U.S. companies, led by Westinghouse, stood to gain $6.4 billion from the sale of six to eight nuclear reactors and parts. Iran was also willing to pay an additional $1 billion for a 20 percent stake in a private uranium enrichment facility in the United States that would supply much of the uranium to fuel the reactors.

"It is absolutely incredible that the very same players who made those statements then are making completely the opposite ones now," said Joseph Cirincione, a nonproliferation expert at the Carnegie Endowment for International Peace. "Do they remember that they said this? Because the Iranians sure remember that they said it," said Cirincione, who just returned from a nuclear conference in Tehran -- a rare trip for U.S. citizens now.

And remember what was said last March by the UN's nuclear watchdog chief Mohamed ElBaradei:

"There is no military solution to this situation. It's inconceivable. The only durable solution is a negotiated solution. I work on facts. We fortunately were proven right in Iraq. We were the only ones that said at the time that Iraq did not have nuclear weapons and I hope this time people will listen to us..."

War, as ever, need the support of the people and this generally involves, at best, governments telling lots of lies; at worst, carrying out attacks and blaming them on the other side. Thanks to the internet, people can more easily discover the truth about government lies by spending some time and doing some research, but is enough of this happening over the looming war with Iran and are people going to get out on the streets to stop it in time? I hope so but I fear the worst.

See also General Strike against Iran being Nuked - can anything less prevent it?