SOCPA - another 'breach of bail' arrest

steve jago was arrested just before 5pm in whitehall tonight. like barbara tucker, he may face jail for alleged breach of bail conditions. his crime? peaceful protest in the socpa zone 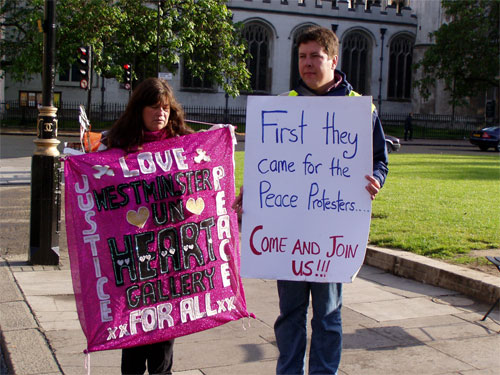 i reported here the day the court ruled that superintendent terry had acted unlawfully in attempting to impose conditions last may when he had no legal right to do so, and so had effectively commited theft by taking brian haw's display in a sick night-time operation costing the taxpayer £28,000.

as mentioned in that report, barbara tucker and steve jago were also in court that day. both have a string of socpa breach allegations against them as well as other charges. both are wading through endless pre-trial hearings where the police keep failing to provide evidence against them but the legal process grinds on. in the absence of any timely court cases, in the meantime both are regularly harrassed, assaulted, injured, and arrested by police while carrying on their human right to freedom of expression and peaceful protest against britain's illegal war.
(many reports on these acts in the indymedia socpa feature)

steve and barbara were in pre-trials again on monday, and both had new draconian bail conditions placed on them out of the blue by judge snow (this despite similar conditions on barbara being thrown out of court on a previous occasion).

barbara was arrested within hours for breach of bail, and faced jail, but solicitors had the conditions temporarily overthrown in court the next day after she had spent more than 18 hours in custody.

one day on, and charing cross police pounced on barbara yet again, as she peacefully demonstrated in parliament square. another woman with her was simply moved, but four burly policemen threw barbara to the ground, and then arrested her, first for alleged potential breach of the peace, then for obstructing a police officer, and finally that old chestnut, assaulting a police officer.
she was detained at charing cross for nearly twelve hours, before being bailed to return at 5pm today.

since barbara had her bail conditions lifted on tuesday (after intervention by her solicitors, bindmans), steve, who is refused legal aid for his socpa offences, attended court today in order to try and have them lifted. his bail conditions allow for court visits, otherwise he is not allowed in the 1km of parliament limit. so perfectly legally, he first went to westminster crown court, but they advised him he needed to go to the court where the conditions were set. on his way to horseferry road, he bumped into the solicitor who is acting for him on an 'obstructing a police officer' allegation. at horseferry road, staff (who know him well), advised him what he needed to do to appeal conditions, and gave him relevant forms. he then proceeded out of the 1km zone, and as barbara was due to return on bail to charing cross at 5pm he walked with her, brian haw, and other supporters towards the station (which is just outside the 1km limit).

suddenly, near the top of whitehall, he was surrounded by police who arrived in two cars and a van. he was arrested for 'breach of bail' (an imprisonable and serious allegation) and despite his explanation that he had been to court and was clearly leaving the zone, they bundled him in a van and took him once again to charing cross.

currently, barbara, with her lawyer from bindman's, is at the station answering bail, and we are waiting for news of steve.

no doubt more on this endless madness later.

barbara released at 7.30
bailed to appear at horseferry road tomorrow morning at 10am for 'assaulting a police officer'
several eye-witnesses lined up to say what really happened

supporters welcome at court in the morning 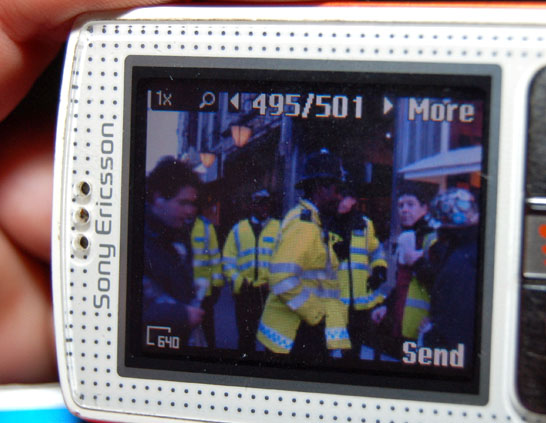 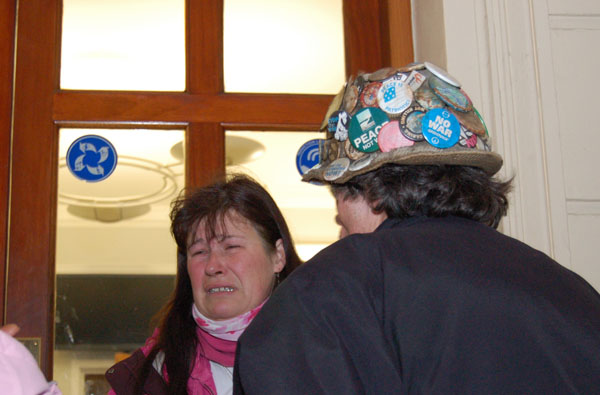 steve's arrest was timed to have maximum impact on barbara just before she was to appear on bail at charing cross. the events of the past few days are beginning to take their toll on this poor woman, and she was in tears when she arrived at the steps of the police station.

thanks to marc vallée for this photo