On 2 Febuary at around 3pm, a group of people under the guise of fictional company 'Greenwash & Co', did a satirical performance at a talk being given by the current UK minister for the environment, David Miliband, at Edinburgh University. The minister was then pied in the face by a lone pie-bearer in an unrelated incident. 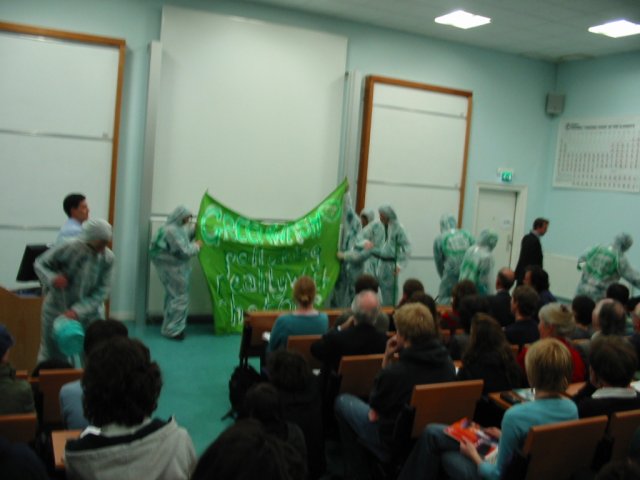 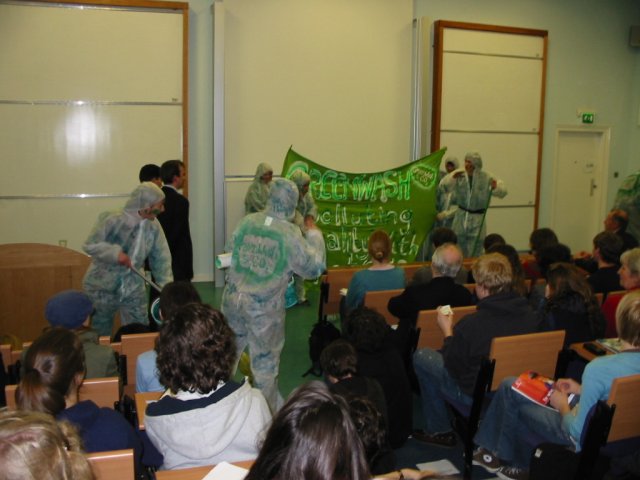 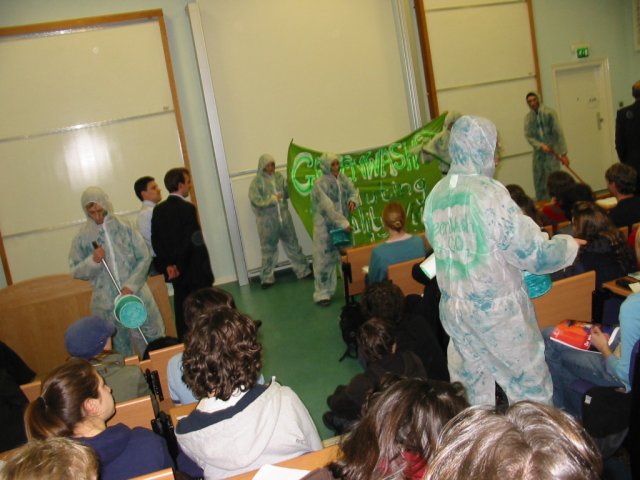 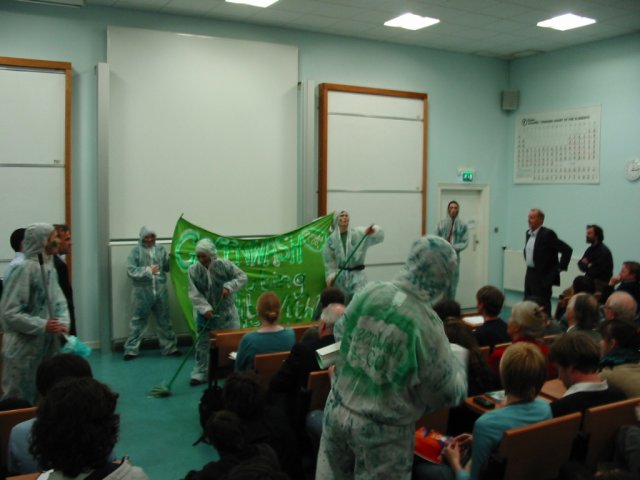 One Member of GreenWash & co said
"We are here to put a green sheen over the terrible environmental track record of the New Labour government. Our assistance was thought to be particularly important given the presence of the Rt Hon. Mr Miliband as figurehead of the government's latest wave of environmental spin and green rhetoric. With airport expansions, road building schemes and continued illegal foreign policy in the scramble for oil control, the government need all the help they can get in greening up their image."

Another Member of GreenWash & co said
“Greenwash has become a widespread and very harmful issue in the fight for environmental sustainability. Now any political body or corporation can reel off a few well-placed buzzwords or implement an insubstantial policy and appear 'green' without really having to make any serious changes. This is lulling people into a false sense of security. The purpose of protests like this is to show people what lies beneath the rhetoric and to wake up to the in-action and spin that surrounds us regarding environmental issues. Question everything: 'green' is not always what it seems.”

GreenWash & Co use satire and pantomime to perform a new kind of political protest through clowning and audience participation. They aim to change the grounds upon which protest is conducted by performing at a cultural level and mocking existing power structures so as to reveal their contradictions, untruths, spin and control. They have a strictly non-violent philosophy and always try to keep things as light hearted as possible despite the incredible seriousness of issues like climate change.

The group stormed the talk with a banner saying “GREENWASH polluting reality with rhetoric” and got straight to work cleaning all of those dirty government policies and brushing all of our carbon under the carpet (through the carbon market). The crowd cheered at the well humoured theatrics but after a few minutes as the security amassed, the performers made a dignified exit to the applause of the crowd.

Simultaneously in a totally unrelated incident an autonomous individual calling himself Colonel Crust used the theatrics as a distraction to thrust a vegan short-crust pastry confection into the well kept hair of Rt Hon Miliband. Witnesses said the minister appeared displeased until he tasted the bright green custard and was presently surprised by the quality of the pie.

You can contact David Miliband to congratulate him for his Green-washing abilities via his email address,