Germany: another 1,000 tonnes of nuclear waste headed to Russia - PROTESTS!

Gronau, Germany, 1 February - - Another 1,000 tonnes of depleted uranium have left an enrichment plant here on a secret train, headed for Russia. 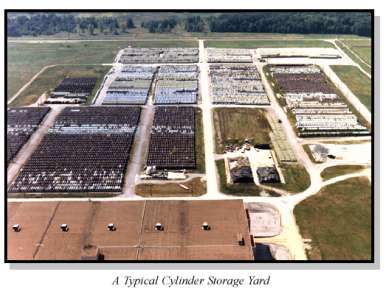 
Anti-nuclear activists were able to find out the train’s departure times, triggering spontaneous protests at Germany’s only uranium enrichment plant, in Burgsteinfurt and in the main railway station of the nearby city of Münster.
The load of depleted uranium passed the border into neighbouring Holland before midnight and will be shipped from Rotterdam to St. Petersburg, where it’s expected in about a week. From there it will continue by train to Ekaterinburg at the Urals or to Tomsk or Irkutsk in Sibiria.

“We think it’s impertinent of Urenco [the German/Dutch/British operator of the enrichment plant] to continue tipping radioactive waste from Gronau outside the door of people in Russia without feeling the slightest shame.

“We demand that the public prosecutor in Münster now deals even more urgently with the complaint we filed against Urenco in November 2006,” said Slivyak.

The complaint accuses Urenco of illegal atomic waste transportation because in the past ten years it sent some 20,000 tonnes of depleted uranium to Russia for final dumping from Gronau alone.

The Russian opponents say Urenco’s claim that the material is a valuable resource for re-enrichment is only a smoke screen because 90-98% of its is dumped in the open air. The prosecutors are investigating; their case number is 540 Js 1814/06.

“The uranium exports are extremely dangerous,” says Felix Ruwe of the action group “Kein Atommüll in Ahaus”, which fights against nuclear dumping at Ahaus, also near Münster and close to the Dutch border.

“When the uranium hexafluoride (UF6) comes into contact with moisture in the air it forms radioactive substances as well as the highly toxic hydrofluoric acid.

“If there were a serious accident in Münster main station much of the city centre would have to be evacuated immediately.”

Ruwe’s group is calling for people to turn up at a demonstration on Saturday, 3 February. “Without public pressure nothing will change in atomic policy, unfortunately.”

In the morning car convoys will start out from Ahaus and Dortmund. A rally on Münster’s Prinzipalmarkt will start at 1 p.m. in Münster. At noon a bicycle convoy will set out from Münster main station.

“That is where we will put the emphasis on the transportation of uranium through the main station,” says Matthias Eickhoff of the group SOFA (Sofortiger Atomausstieg) Münster.