barbara tucker has for the moment given up her daily protest in parliament square. she was forced into this decision through ill health caused by more than a year of police victimisation and harassment, and by a court threat that if she breaks bail conditions imposed today she will be imprisoned. having been detained overnight by police on a dubious charge of breach of bail, steve jago has now regained his unconditional bail and is free. 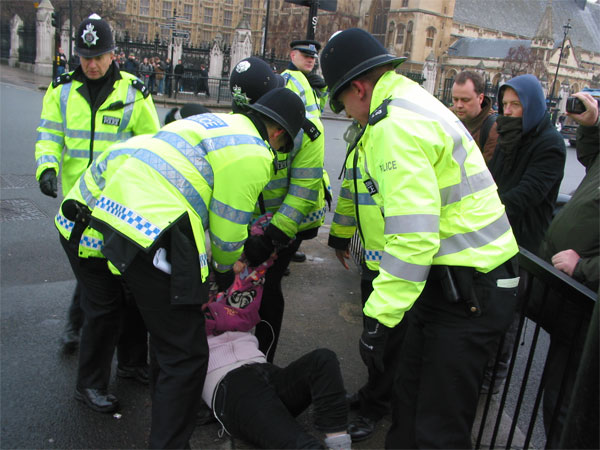 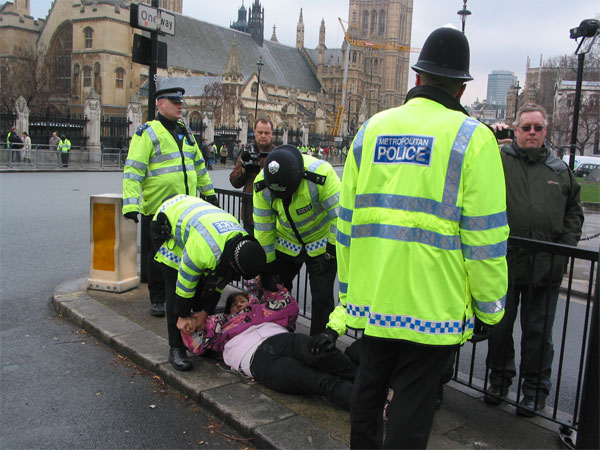 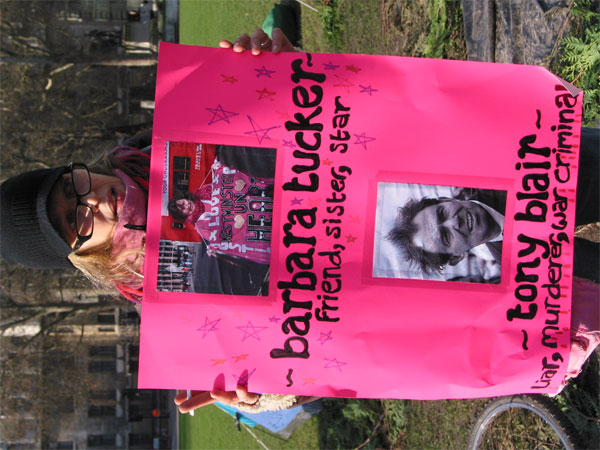 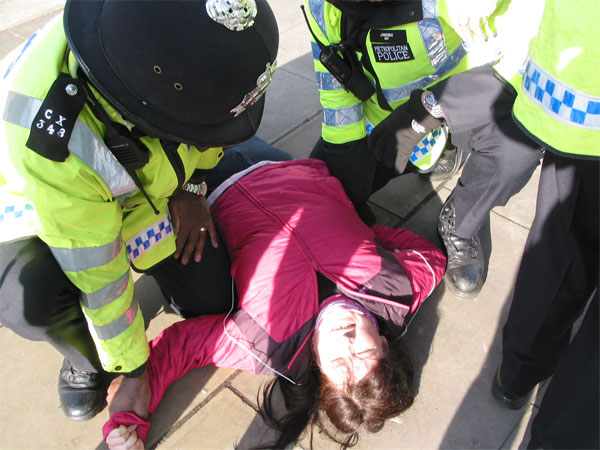 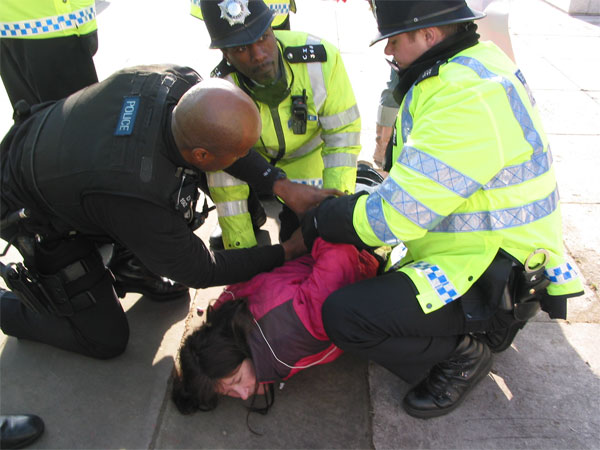 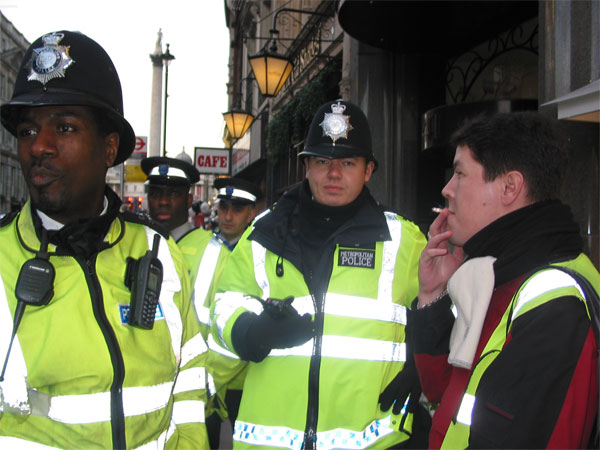 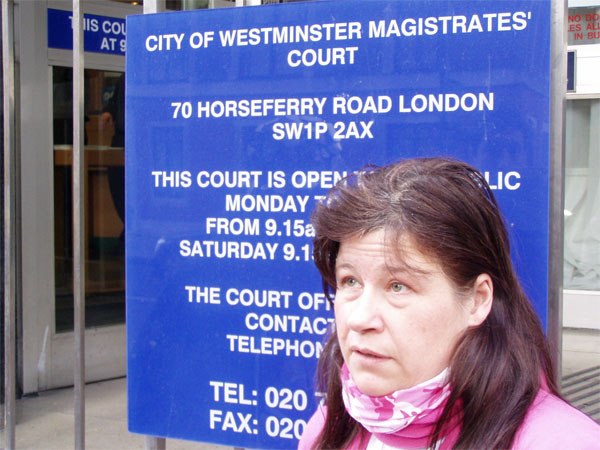 this week has been a particularly shameful one in the shameful history of this evil legislation. for catch up info, and context of some of the pics above, see my previous report at

first, barbara was in the dock charged with 'assaulting a police officer'. the prosecution lawyer claimed that wednesday's arrest was because the police 'thought' that barbara was going to throw herself in front of the prime minister's car. no evidence was offered for this presumption. there was no discussion of the fact that she has been around the designated zone for more than a year now without the slightest hint of any such intention. this kind of argument is of course for the trial, and in the meantime, we are told british law works on the basis of innocent until proved guilty - apparently not when it comes to peaceful protesting near parliament. the prosecution stated that barbara had punched a police officer while trying to climb over a cordon. there are six police officers willing to testify to this in the face of contrary evidence.

the defence are calling just three witnesses, and are 'looking forward' to receiving the cctv footage to back up their photographs of the incident. they assert that barbara was targeted on wednesday.

barbara's bail condition was lifted on tuesday after her lawyer argued that there were no grounds to believe she would commit more offences as she hadn't been charged with anything since last august. so it looks like no coincidence that the police moved in on wednesday to contrive a new offence and have the bail conditions reapplied. their action was astonishingly blatant - they were even overheard mentioning her by name and seen pointing at her prior to the operation. incidentally, the the police report doesn't mention a punch, just a push - another little discrepancy on top of all the others.

barbara's lawyer made a brave attempt to argue out any bail conditions once more. she referred to the whole context of these allegations and the other dozen or more pending court cases - nothing proven, not a single conviction. she stated that on the 22nd of february, barbara's next court date to finally hear new socpa arguments, they will be able to prove a total 'abuse of process' by the police and the crown prosecution service. she said there was something clearly afoot - a targetted police operation against barbara so intense that barbara's health and well-being are now at risk.

at this point, pc smith suddenly stood up in the public gallery. now pc smith is an interesting character. he ghoulishly follows barbara, steve and brian haw around their various court cases. it seems he acts as a secretary to the infamous superintendent peter terry, the man who judge purdey exposed a couple of weeks ago in court for brazenly imposing conditions on protesters, when he had no more authority to do so than a sewer rat. in his defence, terry had been relying on a rather dubious document signed by commissioner ian blair, but not even dated! see how high all this corruption goes? anyway, pc smith stood and addressed judge purdey from the gallery. if i did that i'd be told to sit down and shut up or face the cell for contempt of court. indeed, brian haw did stand up, just a metre from smith, to point this out and question the proceedings, and immediately judge snow ran out of the court room and brian haw was removed by security guards. but somehow, pc smith was allowed to speak, and allowed to enter the court and have a private word with the prosecution lawyer who then announced that barbara had additionally been arrested for "interrupting" police on duty on the 24th january. some new crime methinks. turned out, she hasn't been charged for the "offence", but well, that's about all the evidence judge snow needed, and he announced that barbara should be given a map of the socpa exclusion zone (which pc smith kindly offered to produce for the court) and that she was bailed on condition that she did not enter the zone for any reason whatsoever before her trial on this assault charge, which was set for the 14th may. her lawyer pointed out that there was a trial management hearing on 2nd march and judge snow decreed that this would be 'lawyers only'. so the defendant can't be there, the public can't be there, and the press can't be there. what happened to 'justice should be seen to be done'? it looks like it went out the same window as justice itself.

snow warned barbara that if she broke the bail condition he would not hesitate to send her to prison, and as she started to ask about collecting her personal belongings from parliament square, where she has been living, the judge ran out of the court once more, and from my angle i could see him skulking around in the corridor until barbara had left the court.

steve jago was then brought into the dock. he had spent the night in police cells after being arrested by nearly a dozen police in whitehall yesterday evening. he had been to westminster crown court and horseferry road, seeking advice about how to appeal the bail conditions set on him on monday - he has been refused legal aid so is defending himself. the bail conditions stated that he could not come within one kilometre of parliament other than to attend court (which is what he'd just done). he told the police where he'd just been, and in court today they admitted that they had telephoned the court to check and were told that he'd left there just a few minutes earlier. but that didn't stop them from arresting him and detaining him overnight.

not even judge snow could square this one, and so the case was thrown out on the basis of insufficient evidence. since steve's conditions had been imposed on the same basis as barbara's, the judge also had no option but to lift the conditions as he had done on tuesday for her after pressure from her lawyer. but steve faces the same warning that if he appears in court again, they will be re-imposed.

would anyone care to bet steve will somehow fall foul of charing cross police's interpretation of the law in the near future?

as mentioned before, all this has taken a toll on barbara's health, and she is now looking forward to a few days rest away from the square to hopefully recuperate before she decides what to do next. i doubt she'll be silent for long.

there is also the small matter of her hearing on the 22nd february. at present she's bailed to return to court to face several socpa charges that day. she is looking forward to exposing the trail of corruption and believes the prosecution will have no cogent argument. but there's a little detail to be worked out first - if she turns up, she'll be in breach of today's conditions, as the court lies within the zone and snow has stipulated 'no exceptions' even crossing out the printed words on her bail form, "except to attend court/solicitors office by prior written agreement". but if she doesn't turn up, she'll be in breach of the bail conditions of those socpa offences requiring her to come to court. isn't justice a fine thing?

"anyway, pc smith stood and addressed judge purdey from the gallery" - that should be 'judge snow' of course. sorry.