Democracy’s Last Stand 3: The Trial of Tucker and Jago

Oscar Beard takes time out to put his twisted view on the continuing trials of Barbara Tucker, Steve Jago and the end of democracy in the UK that most seem to have given up on, or just lost interest, with no foresight into the future implications. 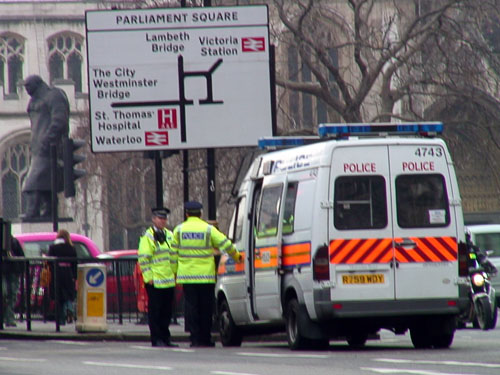 10.30am - A van full of police at the southern end of Parliament St 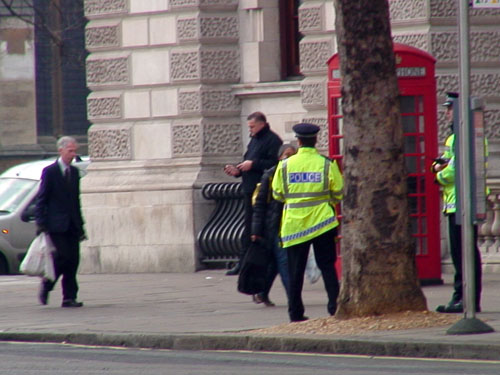 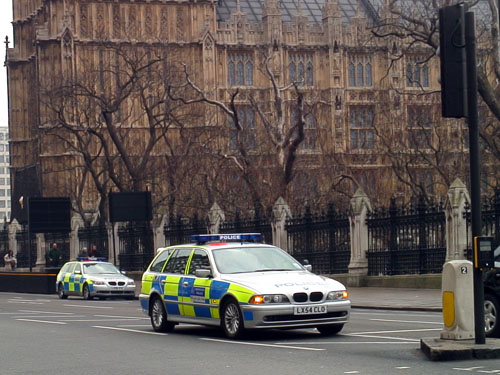 “I had trouble finding the court,” I said to another journalist who was waiting outside courtroom number six.

“These cases are easy to find,” he replied, “just look for all the police waiting outside.”

But, on that day of 2 February in the year of our lord 2007, so was all of Westminster. The police presence was high around Whitehall, Downing Street and on all roads surrounding Westminster Palace.

Patrol cars and riot vans with bored and tired-looking cops were slumped over the seats inside. The journalist in the waiting told me it was the same as he passed through Trafalgar Square. Cops everywhere. Something was wrong that day. But what? Were the parked patrol cars and riot vans waiting for some kind of retaliation to the week’s police activities against peace protestors Barbara Tucker and Steve Jago? Or was there something more to this? Perhaps an important visit? Or maybe yet another terror threat? After all, all it takes these days is lone beared civilian and a backpack, or a tourist in a terraced house. Or was that a journalist in a tourist house?

A quick call to a mainstream journalist with contacts in Scotland Yard press office concluded there was no VIP visit to the Prime Minister's home or parliament and absolutely no reason for increased security.

Two female officers sat opposite me as I tapped away frantically on my laptop discussing long shifts, early shifts and police drivers operating on only three hours sleep.

After an hour Pink Barbara Tucker appeared looking tired and worn out, the stress mounting up from the years of arrests, assaults and abuse from Her Majesty’s finest, or dirtiest – it depends on who you ask – the Metropolitan Police.

She was on form as usual, the exhaustion of the week’s events of harsh bail conditions being imposed and two arrests in three days not hampering her soul one iota.

Once in court Tucker was asked to plead guilty or not guilty to the alleged assault of a police officer - that being one of the four thugs that wrestled her to the ground on Wednesday lunchtime, as Prime Minister Blair attended the PM Question Time in parliament.

The police line was they feared Tucker would throw herself under the front wheels of Blair’s armour-plated Jaguar car.

Tucker refused to answer yes or no to the charge - she just hit Judge Snow with a barrage of injustice and illegal policing accusations. Her responses were dampened to almost obscurity by the thick protective glass surrounding the dock. But protect whom from whom? Maybe to protect Judge Snow from this peaceful campaigning mother who, in his eyes, could well jump over the dock and throttle the pompous wimp at any second? Or perhaps protect her from the gross injustice being dealt out in every sentence that fell from Snow’s foul and corrupt mouth.

Her lawyer jumped in, already looking like a Sparrow cornered by the local Tomcat, and made the plea of not guilty.

Judge Snow - DJ Snow to his pals, yet he didn’t get out his record decks, nor even play one damn tune, I felt cheated – reiterated the countless outstanding charges against Tucker, 12 in all, and called yet again for bail conditions to ban her from the SOCPA zone, as he had done on Monday 29 January, then retracted them the following day.

Barbara’s lawyer put the case forward that this latest and other police attacks were part of an elaborate operation to take down the peace protestors and the Parliament Peace Camp, but Tucker in particular, who had pissed off nearly every member of Charing Cross police station, especially Superintendent Terry, a slimy worm that usually resided behind a maggot-ridden desk somewhere in the bowls of police headquarters on Agar Street.

The cop in the public gallery suddenly stood up, officer CX 674, known a Smithy, interjected, and asked to give some evidence. Judge Snow agreed and Smithy stepped into the court flapping his notepad in a limp wrist.

Brian Haw stood up and asked if he too could give evidence vital to the case. Snow refused bluntly. Brian protested, words like illegal, injustice, corrupt, thugs and gorillas spilling from his mouth in an anarchic torrent.

Snow demanded Haw leave the court. But when Haw continued with his barrage of vicious verbal assaults, the kind that has made him famous for the last five years and eight months, Snow ordered he be removed and disappeared from the courtroom rapidly. Security moved in but Haw left of his own accord.

After a minute Snow returned. Later investigation, and the loose lips of one court official, found that Snow often left court like this, usually for any reason. But outside in the judicial halls waited four shaven Samoan monkeys in lime green bikinis, holding aloft silver platters on which sat glasses of chilled champagne and freshly chopped lines of the purest Colombian cocaine. The £50 note was ready rolled and licked tight with primate saliva.

Snow sat down in his chair like an over zealous bank manager who had been refused a gun permit and called for trial on Tucker on 14 May at 10am. He sat and lectured her about her 12 outstanding offences and, as expected imposed a total ban from the SOCPA zone.

Tucker protested, but Snow told her to leave the court room. When she did not and continued her protest behind Plexiglas, he fled the courtroom again, into the waiting arms of his loving Samoan monkeys, where they stroked his forehead lovingly and used bamboo straws to blow Iawaska up his nasal cavity.

Next in the dock was Steve Jago, another hardened serious criminal. Charges included protesting around parliament with a blank banner, assaulting a police officer whilst restrained by three cops, being handcuffed and getting kneed in the leg, resisting arrest whilst a pen, or some other blunt instrument was being rammed into the base of his skull behind his his right ear - a general all-round enemy of the state. You get the idea.

Behind him in the enclosed dock sat two court vultures, who looked like they hadn’t eaten for a week and Jago was the main course on the lunch menu.

Jago stood charged with breaching bail conditions from the previous week. Not only was he banned from the SOCPA zone, Jago’s bail conditions dictated he was not to be within one kilometre of parliament, which, in certain areas, surpassed the protest ban zone.

On Thursday Jago attended court at Horseferry Road to find out how he could appeal the bail restrictions, the one clause on his bail conditions being allowed to enter the zone to attend court. As he left the SOCPA zone via Whitehall, to be exact he was some ten metres from leaving the area, when a police van pulled up and eight cops arrested him. He had spent the last 24-hours in a jail cell and looked like it.

Judge Snow, now somewhat on another planet from his regular monkey excursions, slumped across his desk, his chin digging deep into his palm, blurted out his new conditions, or the conditions from someone higher up, maybe.

Jago’s conditional bail turned to unconditional in an instant after his lawyer explained he was in the zone to go to court.

Snow huffed and swelled like a giant Amazon toad, knowing full-well the conditions originally imposed could not be held up in any court, not even an Iraqi one, the only difference being, under coalition control, Jago would be hung, not just face a long term sentence in prison. Hell, in Mexico he probably wouldn’t even make it to court. Someone would find him one morning chopped up with machetes.

Judge Snow called Jago to reappear at court on 22 February, 10am, and promptly rose up and left the room, running back to his monkeys for comfort and further mind expansion, despite the mornings proceedings stating obviously to this journalist the hallucinogens were not working and he should immediately section himself and sign up for electro-shock therapy.

And that was it. The UK prisons are full to boiling, to the point our authorities are talking of releasing hardened criminals back into the community. And yet these two peace protestors are facing one of the largest and most expensive police and legal operations in existence in London at this time.

A time of fear and terror and destruction of civil rights. But that is what it is all about. It is down to two or three or four people now, to defend the rights of every protestor, every person opposed to the current government plan, to the rights of every damn person in this godforsaken country.

And that is the way it fell on Friday 2 February 2007. And it landed in a heap of crushed, broken and splintered bone someone once called democracy.

SOCPA - another 'breach of bail' arrest

On The Ground at Parliament Square: Democracy's Last Stand