brian beat five other nominees by an overwhelming majority in a channel 4 poll tonight. he has won the channel 4 award for the most inspiring political figure of 2006. 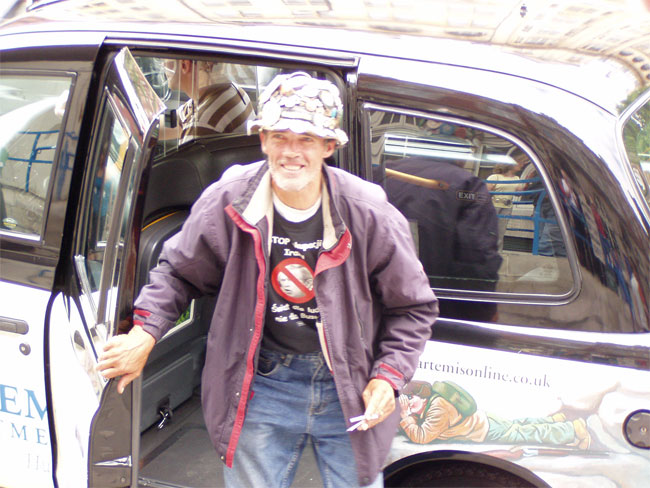 the six nominees were

brian's majority, with thousands of votes cast, was described as 'overwhelming' on the c4 news tonight. he is attending a gala reception at the channel 4 studios in horseferry road this evening. his personal guest is barbara tucker, whose solicitors were fighting in court today.

as reported on indymedia recently,

http://www.indymedia.org.uk/en/2007/02/361384.html, barbara is banned from the socpa zone without exception until a court case in may. the c4 studio lies in that zone! her solicitors pointed out the idiocy of the conditions that also prevent her from attending legal hearings about her own cases, and even an actual socpa trial on the 22nd feb. they overturned the conditions and district judge snow has allowed her to attend the reception tonight as long as she goes directly there along horseferry road. he also has kindly allowed her to attend her own trials.

the presentation will be broadcast on c4 on saturday evening at 7.10

tony mcnulty, the new labour home minister for police and security, was supposed to be sitting right next to barbara and brian at the awards tonight.

guess what? the cowardly so-and-so didn't show. i guess he didn't want to have to face the woman his government's been trying to lock up for the last year.

meanwhile, babs had some small talk with david davis, shadow home secretary, who showed himself to be no better with some fatuous comments about people being nice to eachother. and a nearby table took the strain of the corpulent ex-home minister, charles clarke, feasting and sweating profusely as always while espousing his nasty right-wing views.

barbara and brian won over most of the channel 4 staff, and barbara had a well-deserved restful evening after all the tribulations and dodgy trials of recent times.

Go Brian (and his valiant supporters).

when he's king to sack Snow

hope the bubbly was flowin courtesy of them rich bastards.
Bless all.
X well done


as i was just about the first person through to the phone lines the opening night whilst watching C4 news, I started a landslide for Brian. Yay !!

Great to hear the news, and I'm sure the reports from rikki and others here will have helped in getting that vote too.

Just got in, having been out of news contact all day.

I can't believe it, this is the best thing I've seen all year.

Every day I see more people discovering the lie that pretends to be democracy - opening their eyes to the con trick the state perpetrates upon us. A public vote that puts Brian Haw 46% ahead of Blair, the man claims to be our elected leader, really does make a clear statement about what people actually think.

And massive praise to Barbara, I hope this makes the bastards think a bit more before they beat you up again.

Wow! Fantastic news. A little chink in the media curtain suddenly reveals sanity. It was always my fantasy to witness such a potent dose of truth at the Oscars - but this was every bit as good.

So. What next? Surely a leadership challenge...

Give my love to Babs.

Somebody actually proposed Tony Blair ? I bet it wasn't Gordon ! Possibly Cherie ?
Peter Mandelson ? Or Lord whatsit ? Somebody a few millions poorer ? The list is endless, isn't it. Nah, it's got to be a joke. Just look for the bloke who's splitting his
sides laughing.

I first took an interest in politics when I visited the Houses of Parliament. I was asked to remove my hat, for security purposes, by a Policeman. When I asked him if he was going to require the same of the turbanned gent also queueing, ` No', said he, `Religious'.

A turban could hold a great deal more of whatever, than my dinky little felt-and-feathers.

So I woke up. Goodonya, Brian. When's the next gathering ?