In a “friendly”/unofficial football game between the Greek national team and the S. Korean national team in London, 4 people holding two large banners (2 people per banner) invaded the pitch. One banner said “70 days of hunger strike” and the other one added “We don’t forget, we don’t forgive” (it looks like they knew that the prisoners were free at last 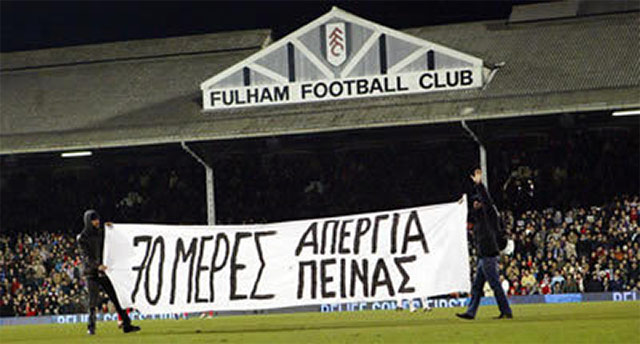 Television cameras captured the scene only for 2-3 seconds and then turned away. The second banner was never filmed as security took it away immediately. The protesters were held by the Metropolitan Police but were eventually released.

They are free till the 23rd where they stand trial. Freedom of expression my arse. Or did it bother some that there was an imminent threat of publicising a case which has had no media publicity whatsoever.

Solidarity to the end