Solidarity is our weapon... 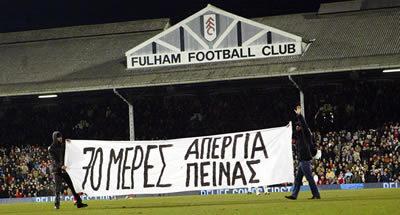 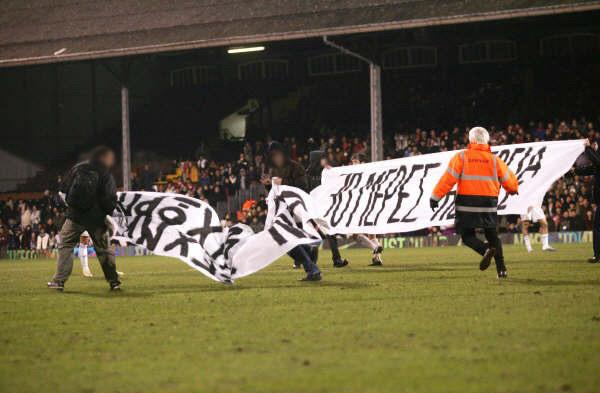 Up until yesterday, two people had been on a hunger strike in Greece: together with a third person, they had been detained by the greek state without trial for eight months. They are charged with rioting during the European Social Forum march in Athens (May 2006) though there is no concrete evidence against them. On the day that Tarasios Zadorozni and Gerasimos Kyriakopoulos were on the 70th and 54th days of their respective hunger strikes, the greek national football team visited London for a friendly match. In the final moments of the game we invaded the pitch with banners expressing our solidarity and resistance.

Even after hearing that our three comrades were finally released earlier on the day, we decided to go ahead with our planned action. This was a conscious, though not self-evident, decision. In fact, right until the last moment there was hesitation and uncertainty concerning the political validity as well as the practical feasibility of the action.

Following a tediously long discussion, we came to the decision not to play along with the State in its game of political manoeuvres made in its own interests: Yesterday's decision to release the hunger strikers does not detract from their near-fatal eight month hostage. As our two banners read:

This action was of calculated (and relatively low) cost. We will stand trial on the 23d of February. The charge against us is that of 'pitch invasion'. As far as we know, the offence is punished only by a fine and does not carry a custodial prison sentence.

We would also like to mention that there were not only Greek comrades amongst us: A clear sign that in this case, though the repression was a greek issue, solidarity is an international one.

Finally, we would like to express our support and solidarity to our comrades, still hostages of the greek state, which did not hesitate in bringing them to the verge of death.