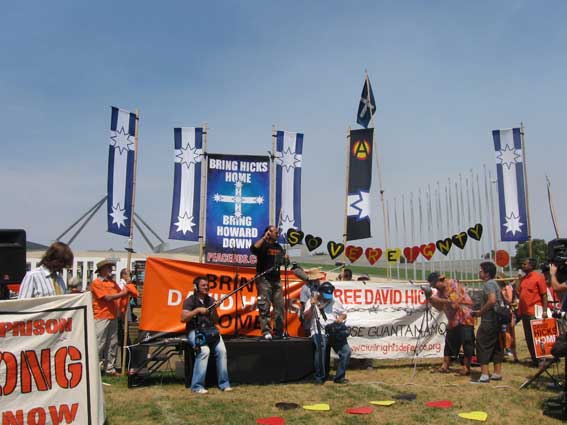 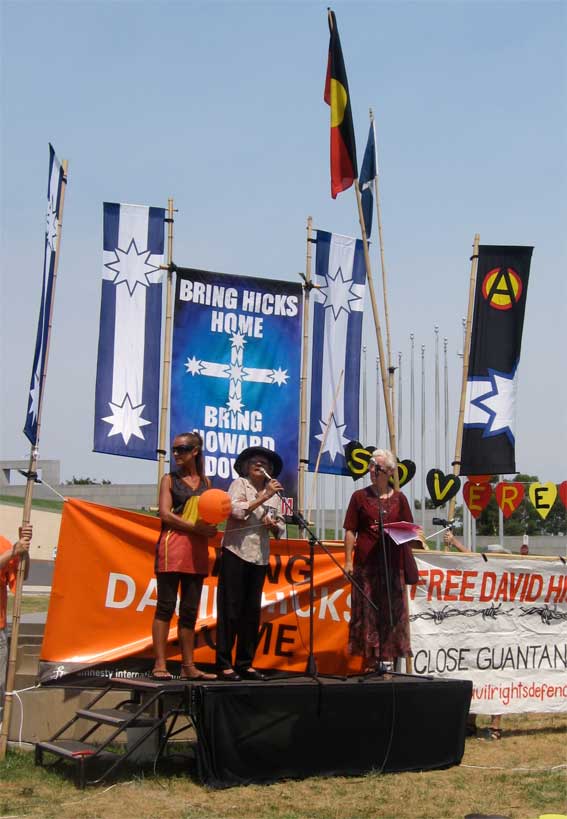 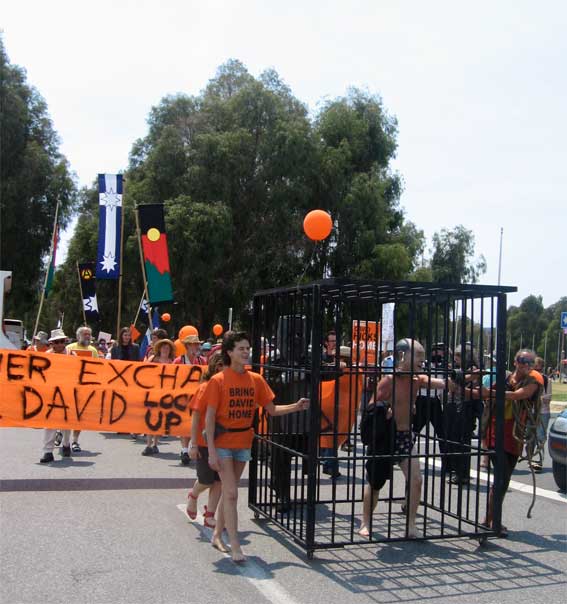 Thanks for your help on the Canberra organising.

We did magnificently on the Convergence. All of us. Big success as protest: uplifting, media grabbing and movement building. Thank you, thank you, one and all.

Big effort for this old man and my beloved Jennifer the Maremma. She has always enjoyed a parade, but aged and ailing now, that march to the US Embassy was near the end of her.

We do best we can. Let's have other collaborations soon!

Let making the evil greed of Cheney visible and publicly reviled in Canberra and elsewhere be our next action together.

Let Howard and his minders try to suppress information about Cheney's itinerary but let that be a creative challenge for us.

Already we can say for certain that he will be staying at the US Embassy while in Canberra and that there will be some kind of reception there for him and the rich and powerful of this land.

Let the chase for the where and the when be shared and a media event in itself.

I reckon a good next step would be to call a public meeting to bring together local people who commit to making Cheney and the people that he meets with in Canberra and elsewhere highly visible.

Let some of us provide, gather and disseminate information; let others act together as quick response teams.

As part of the lead up, I suggest we set up a hotline and website to receive leaked information, that we publicly invite police, media people, politicians, politician's servants, baggage handlers, chauffeurs, anyone anywhere who gets a whiff of the whereabouts of Cheney or where he may be headed next, to become citizen informers.

Let us commit to hounding Cheney at every opportunity with quick assembling crowds and street theatre.

Bring a sign. Bring a costume. Bring a pot and bang it!

Maybe the step after calling such a public meeting might be to announce a creative making workshop where volunteers will prepare signage, flags, and costumes, rehearse street music and street theatre.

May we overwhelm Cheney and transcend his evil.

May our path be creativity and good humour.

And may we make many friends along the way.

For peace. For justice. For the Earth!

PS Feel free to put this out on your networks. In fact let's begin an email
list at once.

Also in the Current Issues section of the website, read the UN's comments on Australia's counter terror laws.

I'm proud to be in the same photo frame as this extraordinarily brave and committed father and my own brother who my family and I love as a human being and not the distorted bogeyman that we read about in the papers.

Thanks to supporters in Canberra an add will be appearing in the Canberra media Thursday 1/2 & Saturday 3/2. Looking forward to see you all.