A combination of leaked documents and public policy debate has recently revealed that the British government is preparing to use the 2012 Olympic games in London as a showcase for multiple big brother police state operations and technologies. 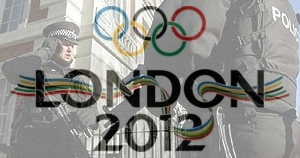 Tuesday, February 6, 2007 A combination of leaked documents and public policy debate has recently revealed that the British government is preparing to use the 2012 Olympic games in London as a showcase for multiple big brother police state operations and technologies.

The London Telegraph reported on Sunday that a memo, entitled No 10 Policy Working Group on Security, Crime and Justice, Technological Advances, asks: "To what extent should the expectation of liberty be eroded by legitimate intrusions in the interests of security of the wider public?"

The document, drawn up by officials at the Home Office and sent to 10 Downing Street, explores ways of winning over public opinion to intrusive and liberty crushing methods of policing and surveillance and concludes: "Increasing [public] support could be possible through the piloting of certain approaches in high-profile ways such as the London Olympics."

This is key as it shows that the overall agenda is to make people accept big brother per se, not to make them accept it in the short term to ensure security at the Olympic games. Once again it is clear that security is not the issue, the real agenda is control.

Some of the methods advanced by the memo include empowering police to scan postal packages, advancing CCTV systems to monitor individuals, tracking people's movements via the electronic Oyster travel card system already in use in London and a massive extension of the national DNA database.

It suggests that police will make much greater use of a technique known as "familial DNA" where a suspect whose details are not on the database can be traced through a family member whose details are already recorded. The memo states: "Records could be trawled more routinely to identify familial connections to crime scenes, providing a starting point to investigations through a family member that is on the database to a suspect that is not, for example."

So now the DNA of Brits doesn't even have to be on the database for their details to be readily available to police. You literally cannot escape the system.

This is without even debating the matter that the majority of the three million people on the DNA database are not criminals but are merely citizens who have had their DNA taken by police in routine investigations of crime scenes. Hundreds of thousands of those people are children aged between 10 and 18. Of those on the database that were arrested, a sizable number have not been charged with crimes.

The DNA database cannot be viewed seriously as a crime fighting or security tool because the vast majority of people on it are not criminals. Again, the agenda is cataloguing and control, treating people like cattle. Without ANY parliamentary debate or legislation, every person in this country is being targeted for inclusion from birth.

Furthermore, it is again clear that such moves have nothing to do with increasing security for the Olympic games. How is it that a British national DNA database is going to keep us secure from any foreign visitors who wish to carry out acts of crime or terror during the global spectacle of the Olympics? Last November the London Times reported that authorities were also considering the 2012 Olympics as a cover for the introduction of high-powered microphones attached to CCTV cameras.

The microphones, which are already in use in the Netherlands, can pick up "aggressive tones" on the basis of 12 factors, including decibel level, pitch and the speed at which words are spoken. They are so advanced that background noise is filtered out, enabling the camera to focus on specific conversations in public places.

Again how are such devices going to prevent any major security threats? What are they going to do, monitor conversations and despatch emergency squads of police if it looks like it might turn nasty?

Once again this about having total information awareness, the ability to monitor everyone, anywhere, all the time. It's about getting used to being controlled and eliminating any backlash towards living under total surveillance. Note how the primary function of the cameras is to detect aggression or dissent.

In addition to simply watching and scanning us 24/7 with the ability to positively identify who we are, which many now consider perfectly normal, the latest technology is being used to monitor and manipulate our behaviour, all under the banner of keeping us safe.

The Olympic excuse for big brother is here, there and everywhere. Today's London Telegraph report's that, in addition to the leaked memo, police are debating whether to draft in troops to help with the policing of the event.

And perhaps even worse still the police are also seriously considering allowing armed foreign police to patrol the streets of London during the games.

The scenario, outlined by one of Scotland Yard’s most senior officers, would have fully equipped FBI and Israeli police strolling around London operating under the British law of “reasonable force.”

We saw all too clearly what is considered to be reasonable force under British law in the summer of 2005 when an innocent man was shot nine times in the head by firearms officers, despite the fact that their superiors knew categorically that he was not a threat to national security.

Will Londoners have to face the same panic levels of security, but this time with Israeli gunmen as their law enforcers?

“I don’t think we should shy away from that. In a global environment, a capital city," Scotland Yard officer Tarique Ghaffur said. "International policing is a global family.”

Indeed it is viewed this way. There has recently been a major movement within the EU to impose a radical law and order package that would allow armed police to operate with impunity outside their home countries, roaming unrestricted across European borders.

Unless the British public stands up for their rights and demands that no more of their liberties be eroded WITHOUT DEBATE, the 2012 Olympic games will represent the opening ceremony of the all conquering and all controlling police state that is being exported all over the western world in the name of keeping us safe.

I seem to remember reading somewhere else how the Olympics was previously used as a tool to promote and globally export a "tolerable" form of fascism. Look how that turned out in the end. So now we see, it can happen here.