A small group of members from Democracy for America Miami and Miami Veterans for Peace have come up with a novel approach to broadcasting a message to end the occupation of Iraq: an aerial banner that reads, "Bring Our Troops Home Now". These two groups decided to first try their idea at this year's Super Bowl in Miami, but bad weather prevented the plane from taking off. Now the organizers have turned their attention to this Sunday's Grammy Awards, which will be in Los Angeles. A plane has been leased to fly the same message over the Staples Center where the Grammys are taking place. 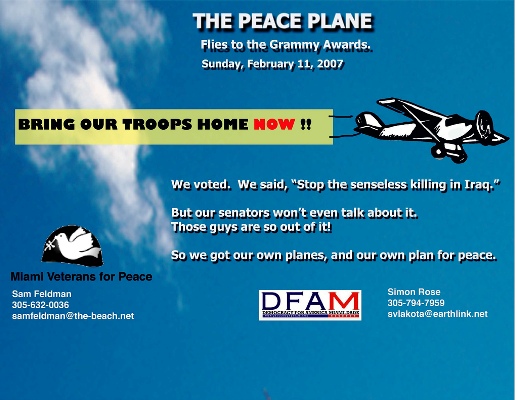 "Though Iraq is the number one issue in America, and though the vast majority of Americans want our troops home as expeditiously as possible, the Senate has decided not to even debate the occupation of Iraq," said Sam Feldman of Miami Veterans for Peace. "Therefore, we must broadcast the message over the rooftops of America until our elected officials show the same courage that our young men and women who are fighting in Iraq show every day."

DFAM is one of more than nine hundred Democracy for America groups throughout the country. DFAM is a grassroots group with the mission to support progressive candidates, clubs, and causes.

For more information on DFAM, please visit the Democracy for America Link at: