Yesterday six people were arrested outside AWE mAldermaston during an hour+long blockade of the nuclear weapons factory. Next BtB blockade 19 March - check the website for more info. What follows is a BtB press release, issued yesterday 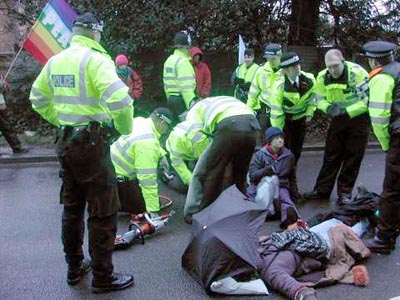 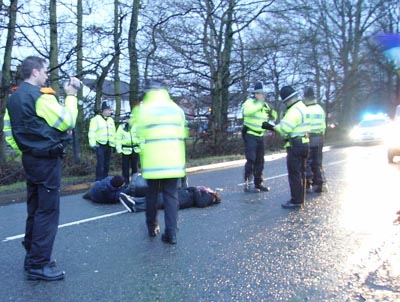 From 7am today [12/02/07], a group of around 50 anti-nuclear campaigners participated in blockades and protests outside Britain's nuclear warhead factory - AWE Aldermaston in Berkshire.

Using a concrete-filled dustbin, metal lock-on tubes and D-locks, two groups blockaded the A340 on two sides of the base, close to entrances used by construction traffic. Roads were closed for one hour and ten minutes while specialist police teams cut out protesters. Cranes and other construction traffic was prevented from entering the site while the blockade was in progress. Other campaigners used large banners and flags to communicate their anti-nuclear message.

AWE is the site of ongoing construction work on new nuclear weapons facilities - on a similar scale to Heathrow's Terminal 5. Work on the new Orion laser has started, despite the fact that a vote on the future of the UK's nuclear weapons system is not due until March.

Six people were arrested during the protest, for obstruction of the highway. Two were subsequently charged and will appear at Newbury Magistrates' Court on 22 February. Between eight and ten hours after arrest, four were given cautions.

All six had been handcuffed on arrest by Thames Valley and Hampshire police, though none had resisted arrest or attempted to abscond. Organising group Block the Builders - an explicitly nonviolent direct action group - are considering writing to Thames Valley police to query this interpretation of police guidelines on the use of handcuffs.

With the government poised to force a parliamentary vote on whether to replace the Trident nuclear submarine fleet, campaigners are concerned that the decision to recommit Britain to a further 50 years as a nuclear weapons state is being made without public consultation. Polls have consistently suggested that a substantial majority of the British public do not want to spend taxes on a new nuclear weapons system.

A spokesperson for Block the Builders said, "In a fortnight there will be tens of thousands on the streets of London, demonstrating their opposition to Trident replacement. When asked, most people don't want UK WMD: today in this quiet corner of Berkshire, we are translating the will of this - frequently silent - majority, into practical resistance. If the parliamentary vote goes in the government's favour, then AWE and the MoD had better get used to the idea of a long and active campaign of opposition."

This morning's actions are part of an ongoing campaign of nonviolent resistance to new facilities being developed at the Aldermastn site - which campaigners believe will facilitate the next generation of nuclear weapons.