if you've followed this issue on indymedia, the name 'barbara tucker' will be well-known to you. for over a year, metropolitan police have been harassing, hounding and assaulting this peaceful woman for doing no more than holding a pink banner in public in the socpa area. yet they have still not been able to defend their actions in court, and the stench of corruption grows stronger. 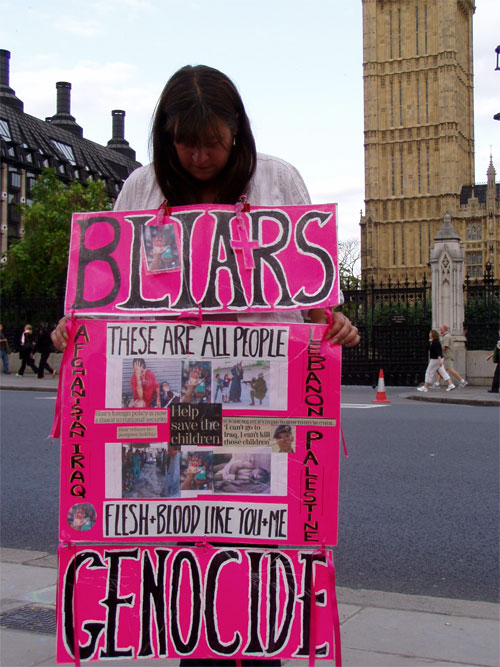 barbara with one of her amazing pink banners

barbara is currently under the most draconian bail conditions, not to enter the socpa zone until a court hearing in may. in the meantime, she is completely innocent of any crime. the only full trial against her for breaching socpa was thrown out of court last year as 'void ab initio' (empty from the start).

although there are a string of socpa charges against her, the prosecution have continually failed to meet deadlines for presenting their case, and in the meantime, barbara has been arrested and assaulted in all sorts of spurious circumstances on a regular and terrifying basis.

a court hearing had been set for 22nd february, but in an extraordinary move, judge snow has made an 'out of court' judgement for the prosecution to 'vacate this date' (ie postpone the trial yet again). barbara's defence have been asking for a listing before trial, but judge snow made his bizarre judgement prior to the defence even seeing the prosecution argument.

the prosecution skeleton argument has finally been presented today, and it includes some notable admissions.

you may have read how in brian haw's court case recently (which he won), superintendent terry produced a letter from the commissioner, sir ian blair, which delegated the power to authorise and impose conditions on demonstrations in the socpa zone. the letter was unusual from an administrative and legal perspective in that it was undated - something for which the police witnesses could not give proper account. well now, in a separate court case, in this skeleton argument against barbara, it is stated that the commissioner has admitted he had no authority to delegate.

can you smell something nasty?

the skeleton argument also suggests that the commissioner is hoping to rectify the situation by asking the high court to rule that he did have the authority to delegate. although unlikely to succeed, this would have the potential effect of criminalising people retrospectively!

so we have the situation that barbara complied with the law by notifying police last march of her intention to protest, and the police have argued for more than a year that it wasn't legal as it was by email, but the very people arguing this have no actual authority to do so. the commissioner has known about this case for months, but has failed to fulfill his obligations under the socpa law to authorise barbara's protest.

the whole case is creaking at the seams, barbara is banned from the zone by bail conditions while the court dates keep getting pushed into the far future. she is threatened that if she peacefully demonstrates outside parliament for peace and justice, she will go to prison.

the socpa law has been tested in court by others, who have so far failed to show incompatibility with the human rights act. while this may be the case on paper, the way it has been used on the ground and particularly against barbara clearly does breach human rights. there is also a distinct contrast between the way socpa has been used against someone challenging blair, and how it has been ignored in other situations. well documented cases continue to reveal that political decisions are involved in the application of this law.

solicitors are trying to get the 22nd february trial date reinstated, but if it is not, then the authorities might be faced with putting an innocent woman in prison and making a new martyr to freedom in this country.

"Has anyone actually been arrested or prosecuted for any of the other provisions under SOCPA?
Or is it purely being used to stop peaceful protest near Parliament?"

There is lots of stuff in SOCPA including making most offences arrestable but the two sections that have been used specifically against protesters are the Parliamentry protest stuff and Criminal Tresspass on a designated area.

There is a legal briefing on 128 at

http://www.tridentploughshares.org/article1405 but it might be useful not to read it since you have to be aware that it is a designated area under 128 for the charrges to stick.

*28* animal rights activists have had their doors kicked in so far and been arrested under SOCPA 2005.