in january a judge ruled that superintendent peter terry of charing cross police station did not have the power to authorise or impose conditions on demonstrations covered by the serious organised crime and police act sections 132 -138. a month later, he is still unlawfully doing so! 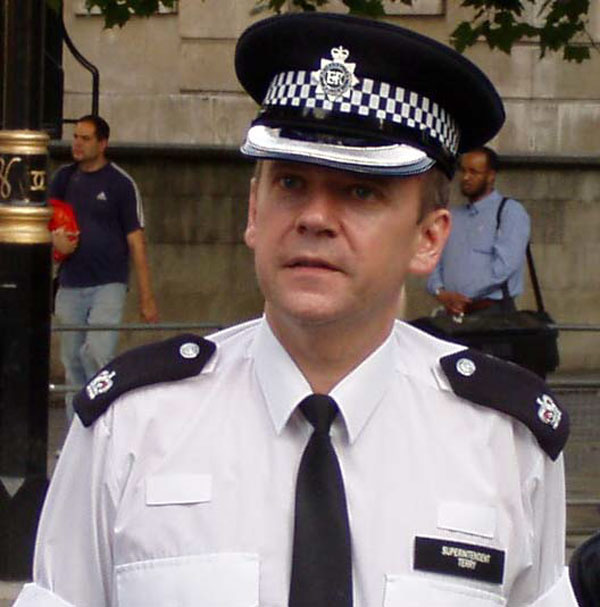 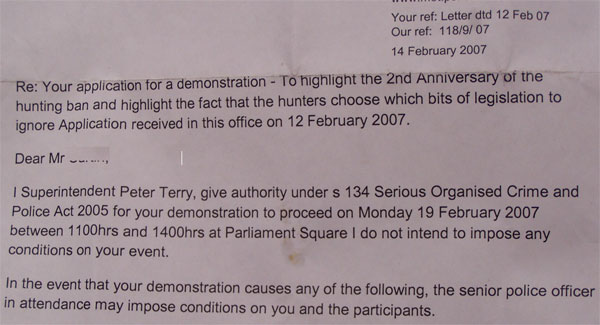 last may, superintendent peter terry invented an arbitrary set of conditions which he imposed on brian haw's fantastic display in parliament square. brian's solicitors argued that the conditions were unreasonable and that terry didn't have the power to impose them anyway. without waiting for a legal judgment on the issue, he went ahead and ordered what is now known to have been an unlawful night-time raid worthy of nazi germany. in the dead of night, 78 police officers swooped on brian haw and supporters as they slept, and thuggishly removed all but a tiny fraction of brian's display.

the matter was finally heard in court many months later, and on january 22nd this year, district judge purdy passed judgement.

"in the city of westminster magistrates' court, regina v brian haw, ruling of district judge purdy 22nd january upon a submission of 'no case to answer' in respect of a complaint contrary to sect 134 serious organise crime and police act 2005.......issues: (i) delegation of powers by 'the commissioner'", judge purdy wrote, "i conclude that the commissioner cannot delegate as he purported to do save within the powers available under the police act 1996 ie deputy commissioner or one of the five assistant commissioners."

so the commissioner could not delegate his powers to a lowly superintendent. the verdict was unequivocal.

(1)this section applies if a notice complying with the requirements of section 133 is received at a police station in the metropolitan police district by the time specified in section 132(2).

(2) the commissioner must give authorisation for the demonstration to which the notice relates.

the law is clear.

today i was shown a letter that a demonstrator received in relation to an event planned today in parliament square. it comes not from the commissioner or any deputies or assistants, but from superintendent peter terry. even though this policeman was in court and heard judge purdy's verdict himself, he seems happy to carry on with the illusion that somehow he has the power to authorise and decide on conditions. he writes, "i superintendent peter terry, give authority under s 134 serious organised crime and police act 2005 for your demonstration to proceed.......i do not intend to impose any conditions on your event."

this policeman tried to convince the court in january with a letter from the commissioner delegating power. but he was at a loss to explain why the letter was not dated. he was in court on 22nd january and listened to the verdict attentively. given that it was shown he had acted unlawfully, costing the tax-payer £78,000 in his ill-judged raid last may, it would seem reasonable for him to be demoted or sacked. but in the corrupt world of 'justice' that we live, he stays in post without reprimand, and continues blatantly exercising powers he and we all know he simply doesn't have.