The London offices of the Carbon Neutral Company were occupied by activists. Article also includes a press release from London Rising Tide. 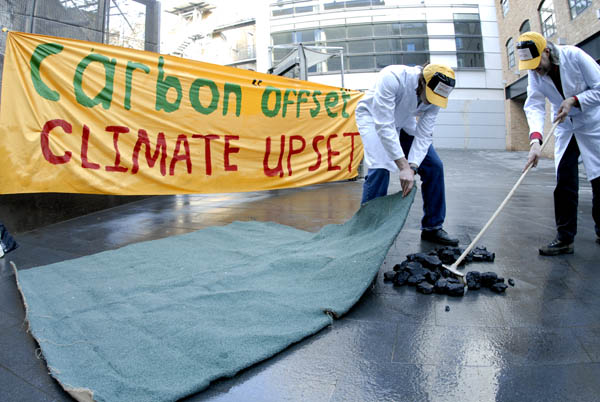 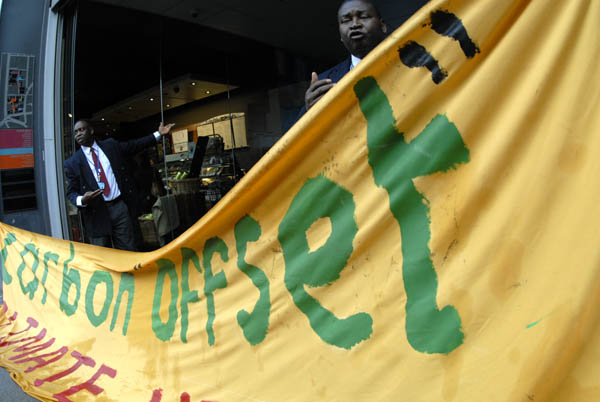 security not happy but it was a peaceful event 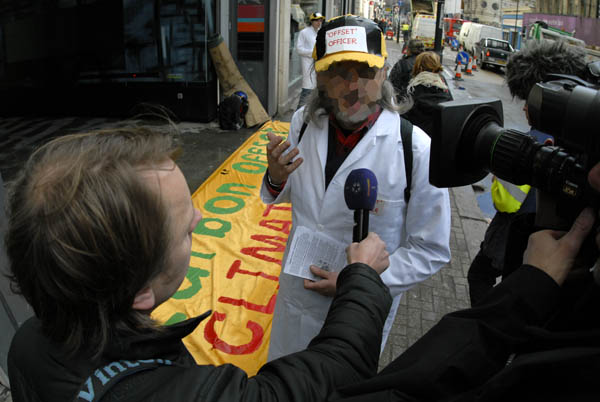 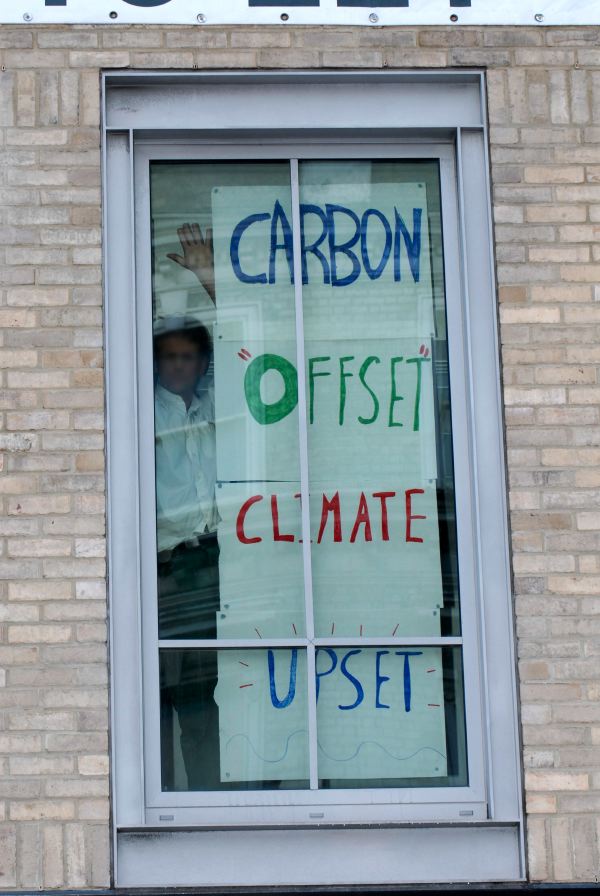 Today, Wednesday 21st Feb 2007, in a non-violent protest, activists occupied the offices of a company dealing in Carbon Offsets, whilst other campaigners carried out an action outside the Company's offices in Kings Cross London. The action was carried out to highlight what they claim is the greenwash of this company, and the dangers of sidelining the hugely important issue of climate change. This action, sweeping coal under a carpet, was carried out to demonstrate their assertion that carbon trading is to attempt to sweep the issues associated with climate change under the carpet.

Below is a copy of London Rising Tides press release relating to this action.

This is what they have to say:

Today we have occupied and with any luck shut down the head office of the Carbon Neutral Company (CNC) here in King’s Cross. CNC is one of many businesses which sell ‘carbon offsets’ to people and companies that want to cancel out their contribution to climate chaos (also known as ‘global warming’). CNC claims that it will neutralise the carbon dioxide (CO2) given off by, say, Silverjet (a private jet airline), and that it will do this by paying people in developing countries to cut their own emissions with schemes that involve renewable energy or tree planting. So what’s the problem?

Carbon offsetting: an excuse for no action?

Climate chaos is an issue of justice: it is hurting the world’s poorest (and least-polluting) people first and hardest, causing massive disasters and threatening millions of species worldwide. Many people are now questioning whether offsetting allows some of us in the richer, developed world to carry on with our massively polluting lifestyles, instead of lowering our own emissions. Those who are buying offsets are often doing so with the best of intentions, but the fact remains that it’s a smokescreen that has to stop.

If we compare the planet to a running bath, full almost to the brim with CO2, to offset CO2 emissions is like saying “I won’t turn off my tap. I’ll pay someone else £10 to pay someone else £2 to turn off their own tap.” (Guess who pockets the change?) The reality is that we need to turn off both, if we’re to have a chance of cutting CO2 emissions by 50% before 2016 (which is the single most important task facing you and me, right here, right now in 2007.)

Not only is tree planting a discredited failure when it comes to soaking up carbon, many other offset schemes are looking pretty shabby when looked at in detail by independent third parties.

Yesterday, Carbon Trade Watch released a report called “The Carbon Neutral Myth – Offset Indulgences for your Climate Sins” that gave a lot of evidence and information as to why offsetting is ineffective, injust and damaging to the climate change debate. (

Our group is called London Rising Tide (LRT), and we are part of a wider national and international movement that believes passionately in taking direct action for ‘climate justice’. We reckon it’s well past time for us to get creative, to get movement-building, to drown out the rising tide of corporate ‘greenwash’ (ie. profit-driven lies), to get food growing with neighbours and friends, and to get seriously disobedient, (but to do it with a good bit of humour).

A while ago, we were asked by the All Party Parliamentary Committee on Climate Change to make a submission about planned Climate Bill. The Committee is administrated by the Carbon Neutral Company. After thinking long and hard about it, this was our response:

‘We're declining the invitation to address the meeting, since we believe in the creation of mass movements striving for systemic social and ecological change. Engaging with the committee would be a distraction from that, as it's not in the interests of either Parliament or private companies to call for - or work for - such change. Also, we are deeply sceptical about the apparent privatisation of the committee process, especially when the company concerned is profiting handsomely from the sale to the public of the phony solution that is the carbon offset.’

Three activists from London Rising Tide today barricaded themselves inside
the London headquarters of the Carbon Neutral Company. The protest took
place to highlight the damage that offset companies are doing in
promoting climate complacency in the general public.

Speaking from the blockade, LRT activist Sam Chase said that, “The Carbon
Neutral Company is today occupying the Houses Of Parliament, so we have
decided to occupy the Carbon Neutral Company. They have no business
chairing a committee like this. Their livelihoods and profit margins
depend on exploiting people’s anxiety about climate change, and as such
it’s a travesty that they are chairing a governmental panel on climate
change.”

Tony Gordon, who also took part in the occupation said that, “Offset
companies are selling consumers a peace of mind about climate change that
just shouldn’t exist. The whole idea of offsetting is a throw back to the
sale of indulgences to guilty sinners in the middle ages – both patently
ridiculous and ineffective.”

The occupation came the day after a report was published, “The Carbon
Neutral Myth – Offset Indulgences for your Climate Sins,” that was highly
critical of the offsets industry, arguing that not only were supposed
climate benefits impossible to quantify, that projects are also being
imposed on communities in the global South with little consultation.

Earlier, people from LRT outside the office had unfurled a banner reading
'carbon "offset = climate upset', and symbolically swept coal under a
piece of carpet, to symbolise the 'effectiveness' of carbon offsets. The
indoor activists left the office voluntarily at about 4.30 having occupied
the offices for the entire day.

Climate campaigners have occupied the offices of one of Britain's leading carbon management companies to protest against carbon offsetting.London Rising Tide activists say offsetting, which sees firms pay for emissions cuts elsewhere rather than curbing their own emissions, is a scam.

The group has occupied meeting space of the CarbonNeutral Company, formerly Future Forests, in central London.


Offsetting is practised by a number of UK companies and the government.

"The CarbonNeutral Company is working away from solutions to climate change, because offsetting is a smokescreen," Sam Chase from London Rising Tide told the BBC News website.

"It lets us continue with our absurd high emission lifestyle, and lets politicians tell the public they are finding solutions to climate change when in fact they are sweeping the issue under the carpet."

Rising Tide has been invited to give evidence to the All-Party Parliamentary Group on Climate Change (APPGCC), which it says has been "privatised", with its operations co-ordinated by the CarbonNeutral Company.

The politicians' group has already heard evidence from other activists that companies running offset schemes are "seriously misleading" the public.
Speaking for CarbonNeutral, Sue Welland told the BBC: "This group (Rising Tide) has never asked for a meeting with us, so we don't know what they do, and I don't think they know what we do.

The government has endorsed offsetting as a method of curbing greenhouse gas emissions.

"The first step should always be to see how we can avoid and reduce emissions. However, some emissions can't or won't be avoided, and that's where offsetting has a role to play."

The carbon dioxide produced during flights taken by ministers and officials is calculated, and money invested in clean energy or energy efficiency projects in developing countries. In principle, these investments will prevent the same volume of emissions as were generated by the flights.

But activists allege that many schemes funded by companies and government bodies do not generate emissions reductions, and do little to benefit developing countries. They are particularly critical of tree-planting schemes.

The government has just launched a consultation on setting a code of practice for companies and organisations running offset schemes.

An article in the Times Newspaper's, Times2 suppliment (21st Feb 2007, p19), confirms the notion that carbon offsetting can have the effect of neutralising anxiety over the consumption of Hydocarbons. The article is an interview with the people who are setting up a new airline called SilverJet, which is mentioned in the Rising Tide press release. The airline's founder, Lawrence Hunt, is quoted as saying "We'll also will be the world's first carbon-neutral airline. The fare will include an amount to offset our emissions. Airlines produce a huge amount of of pollution and we have to act responsibly".

Silverjet's business is unusual as they plan to fly only business class passengers, who can be picked up initially by "chauffeur or helecopter". Its first flights will be between Luton and New York, tickets will cost £999, and there will be only a 100 passengers on board.

It all sounds carbon heavy. There are a number of problems plainly visible in the carbon offset approach. The poorer countries can be seen as places to plant forests, but who monitors the quality and social impact of this planting? I also seems just plain unfair as a concept that a few people in the rich world burn huge quanitities of hydrocarbons and live a poluting lifestyle, while others scratch around in Carbon Offsets Lands. I am unclear on the details but I believe there have been a number of disasters where forests planted to offset carbon emissions have died. Also that they have been planted on indigenous lands.