A bunch of raving Facists!

The Jerusalem Summit is quite simply a bunch of fascists! Who... Not only held this summit meeting in London, but were allowed to hold it at the House of Lords.

Their main aim is to rid the West of Islam and unite all Christians to resist Islamic values. In their own words, 'the West must unite and resist Islam.' 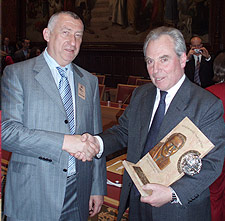 What a bunch of Fascists...!

The Jerusalem Summit is quite simply a bunch of fascists! Who... Not only held this summit meeting in London, but were allowed to hold it at the House of Lords.

Their main aim is to rid the West of Islam and unite all Christians to resist Islamic values. In their own words, 'the West must unite and resist Islam.'

The aim of the summit which was held on 28th January 2007 at Westminster Central Hall was to unite extreme fundamentalist Judeo-Christian evangelists, extreme right wing Politian’s and academics in an effort to not only to oppose the spread of Islamism but to rid the West entirely of Islamic views.

How can this racist hate campaign be allowed in the United Kingdom?

What is most shocking of all is that the summit awarded Lord Malcolm Pearson of Rannoch, a supposedly reputable member of the British House of Lords, and Baroness Cox, for their hellish contribution to this racist campaign....

But it get's so much worse!!
This summit was sponsored by Mikhail Cherney (A.K.A Michael Chernoy, Mikhail Chernoi, Mikhail Chorny, Misha Tschernoy or another of him criminal aliases), one of the so-called Russian oligarchs and Chairman of the Cherney Foundation in Israel that portrays Cherney as a philanthropist and legitimate businessman. What a load of crap!!!

Let's examine that. The FBI considers Cherney to be a member of the American Russian mob headed by imprisoned godfather Vyacheslav Ivankov! Cherney: a danger to the public? For certain! The London Financial Times reported that Cherney has been suspected of large-scale fraud, racketeering, tax evasion, embezzlement, money laundering, and conspiracy to commit murder. Reported to be living in self-imposed exile in Israel, Cherney is rumored to be an important figure in organized crime throughout Europe, the United States, and the former Soviet Union and is barred from entering a number of countries including the United States, Russia and Bulgaria - a fact reported by law enforcement agencies across the globe, including Interpol, and cited by numerous and credible press agencies.

So... this criminal Cherney is allowed into our country, into our House of Lords and allowed to present to a bunch of fascists a lifetime achievement award for their work. We cannot allow this. More info to come soon.


See it to believe it. www.jerusalemsummit.org ...What are your thoughts?