Over a hundred Glaswegian asylum seekers and supporters, most of African origin, held a lively protest outside the Home Office Reporting Centre at Brand Street yesterday (Wednesday). They were protesting against the detention and attempted removal of Eddie Ngienga, Angelique Lukombo and their children, here since 1999. 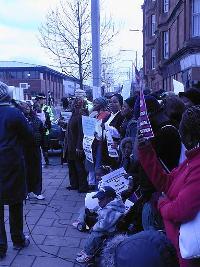 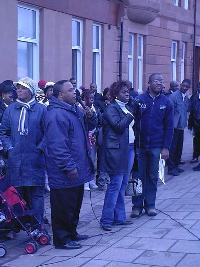 Pastor Daly and Brigitte on the PA 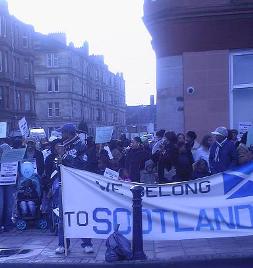 We Belong to Scotland!

In unseasonably sunny weather, the mood was defiant and upbeat. A PA system was there for speakers, who include Pastor Daly from Angola and Brigitte D, who won Leave to Remain after a hard fight just before Xmas. The protest was the biggest seen outside Band Street for some months and the singing could be heard halfway to Paisley Road. Two police riot vans rolled by but disappeared, leaving 4 beat cops to play with the many kids from the families.

Eddie and Angelique were picked up in the Home Office’s sweep of Congolese families in preparation for a mass removal by charter flight by XL Airlines, coded XL4334. Families were taken from Middlesbrough, Leeds, London, and Birmingham, as well as Glasgow. The flight is scheduled for Monday 26th February at 21:00 and there is a joint campaign by all the families to have this stopped. See

DR Congo is one of the most deadly places in the world. Since 1998 over four million lives have been lost in the DRC and though the war is over there is no 'peace' and deaths continue at the rate of 1,200 a week. Recruitment of child soldiers in the DRC continues unabated. The infrastructure of the country's hospitals, roads and power supplies are archaic and in some areas non-existent. One of the most incomprehensible things about John Reid’s action is that last month he brought in a number of people from DRC under the “Gateway Protection Programme” and gave them refugee status. Is it about appearances rather than sense, John? Surely not.

Home Office snatch squads have detained a number of families and individuals from the Democratic Republic of Congo (DRC) who have been living in Briain for several years. All those detained have been served with the same removal directions: "Directions have now been given for your removal from the United Kingdom by (flight/ship) OTTHxla4334 to Congo Democratic Republic at 21.00 hrs on Monday 26 February 2007".