AUSTRALIA: "Chain up Cheney/Troops out of Iraq" - Cheney visit protest in Melbou

While the main protest at Dick Cheney's visit was held in Sydney, members of Melbourne's anti-war and civil rights movements marked the occasion yesterday (Thursday) outside the Nike store on Bourke/Swanston ... 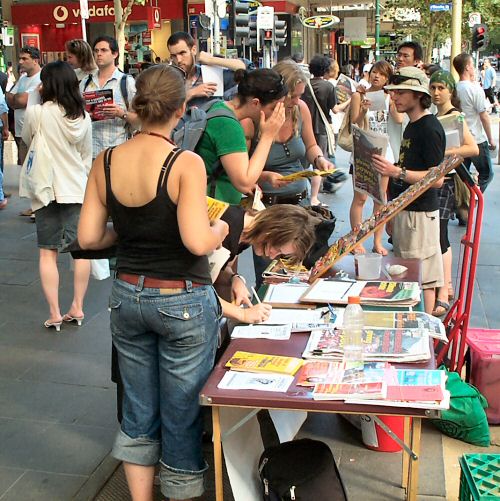 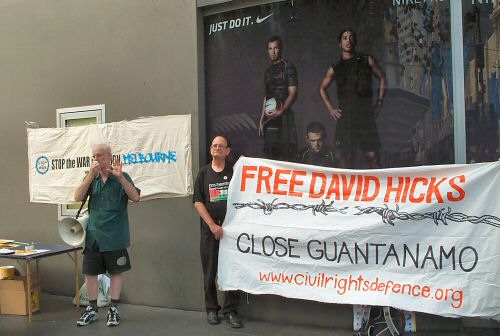 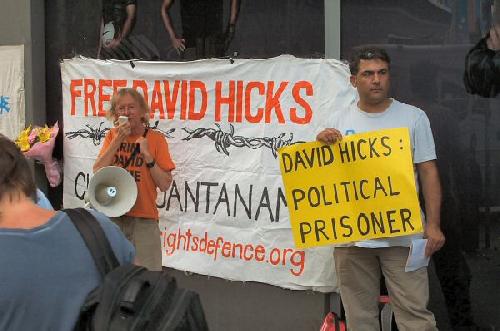 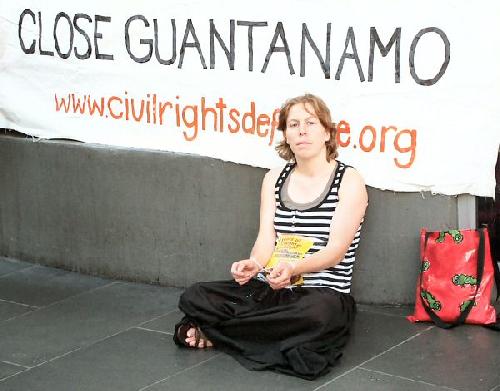 It was effectively an open speakout, and a succession of speakers put their perspectives on issues connected with the war. Demands for the closure of Guantanamo bay and the unconditional release of David Hicks were prominent, as were calls for Dick Cheney and the rest to be tried for war crimes, breaching the Geneva Convention by waging an illegal war, pursuing the infamous practice of "extraordinary rendition", etc. Several speakers used the occasion to promote the upcoming rally on 17 March which will mark the 4th anniversary of the invasion of Iraq.

The case of David Hicks was also prominent, with suggestions that the Howard Government, now the only one in the world which supports the use of Guantanamo Bay, has a vested interest in keeping David Hicks out of the country for fear of what he might reveal if he were free to speak openly about his treatment as MamdouH Habib has. And this would be not just a question of embarrassment: there is legal opinion on record that members of the Australian Government could be liable to prosecution for war crimes by virtue of their support for and complicity in breaches of international law and the convention banning torture. The suspiciously suddent turnaround in Howard and Ruddock's public statements about Hicks was also mentioned, with a suggestion it may not have been entirely unconnected with the opinion polls and the approach of an election ...

No-one would be suggesting that a small rally such as this one would be enough by itself to stop Dick Cheney's visit or achieve any of the other demands, but as one speaker said, Tony Blair, whatever the public spin on it, has been forced to start withdrawing troops because year after year of unremitting pressure have made the political price too high. That is the only thing which will force a change in governemnt policy here as well, and for all that the numbers were small, passers-by were stopping to listen and ask questions, and there was a steady stream of signatures on the petitions for troop withdrawal and bringing David Hicks home, and people were taking leaflets and reading them...

On the subject of Guantanamo Bay, Julie Bain of RAC spoke about the new ultra-high security 800-bed 'detention centre' nearing completion on Christmas Island. (There is more about this on the RAC website -

http://www.rac-vic.org.au, including a leaflet and photos.) Interestingly enough, last Novemeber officials from the US Homeland Security chartered a plane and flew in from Singapore to take a look at this state-of-the-art facility - judging from the plans that have been leaked it must have made their mouths water.

There will be another "Bring David Hicks home" protest today (Friday) at Casselden Place at 12 noon. 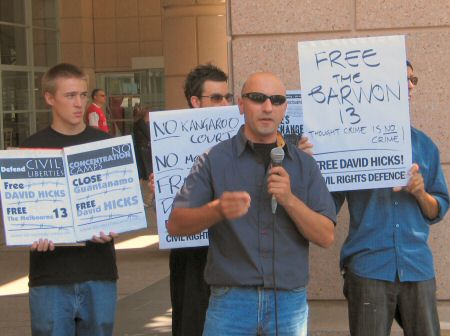 Audio of speech at Casselden Place 16 Feb - relative of one of the 'Barwon 13' describes conditions there. Total duration 9mins.32

http://melbourne.indymedia.org/news/2007/02/140233.php) one of the speakers at last week's vigil in support of the 'Bring David Hicks Home' campaign was a relative of one on the men imprisoned in maximum security for almost 500 days under the Howard Government's terror legislation. Here is what he said, introduced by Shannon Price of Civil Rights Defence: