Today No Borders Brighton protested at the main office of charter flight company XL due to the company's involvement in the deportation of almost 50 people to the Democratic Republic of Congo. 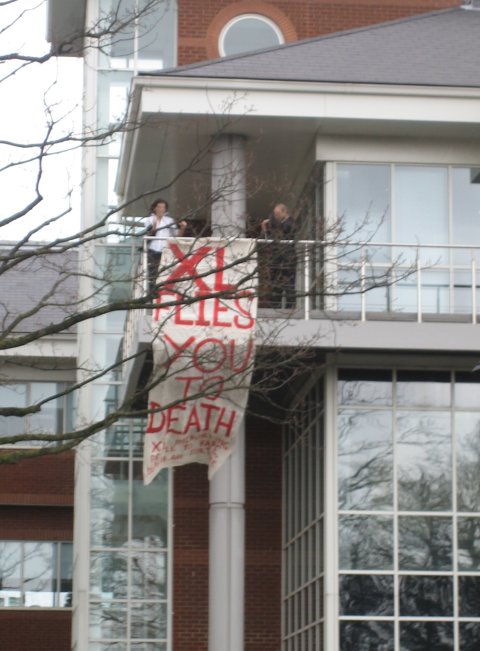 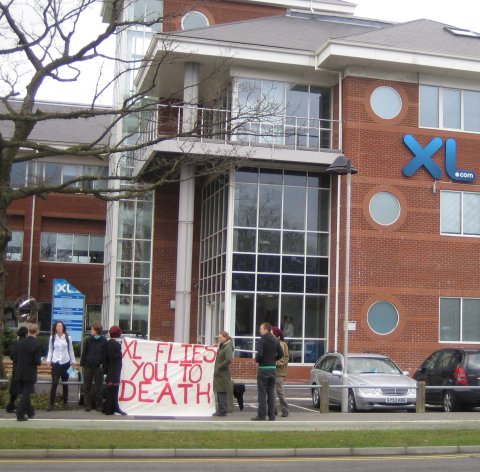 XL offer cheap holidays to sunny destinations and claim to 'fly you to freedom'. But on their website there is no mention of their flights to places such as the Democratic Republic of Congo where they are due to forcibly remove 19 children and 27 adults on behalf of the home office this Monday. On arrival asylum seekers are routinely handed over to the Congolese security services where they, (unless able to afford a massive bribe) are treated as political dissidents and imprisoned indefinately in the notorious malaka prison where torture and starvation is common.

About ten people visited the XL headquarters in Crawley, east Sussex. A banner was dropped from a balcony and people tried to inform XL workers of their companies involvement with Mondays flight by handing out leaflets and talking to them. I'm sure future visits would help to convince the company to abandon doing the government's dirty work.

Home Office snatch squads have detained a number of families and individuals from the Democratic Republic of Congo (DRC) who have been living in Briain for several years. All those detained have been served with the same removal directions: "Directions have now been given for your removal from the United Kingdom by (flight/ship) OTTHxla4334 to Congo Democratic Republic at 21.00 hrs on Monday 26 February 2007".