Coming from the chief architect of the illegal US-led invasion of Iraq, these words can have only one meaning: the US is preparing for a military attack on Iran. As far as Cheney is concerned, Tehran’s failure this week to abide by the US-backed UN resolution demanding the suspension of Iran’s uranium enrichment facilities is just one more nail in the coffin. 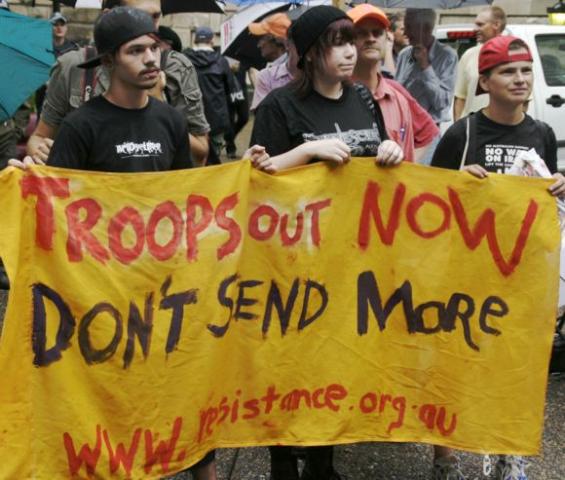 Just one more nail in the coffin

Military action against Iran may not have featured in US Vice President Dick Cheney’s keynote speech in Sydney yesterday, but it is certainly on his mind. In two interviews published today—in Murdoch’s Australian and on the US-based ABC News website—he confirmed that the Bush administration was willing to go to war against Tehran on the pretext of halting its nuclear programs.

The Australian’s foreign editor Greg Sheridan asked Cheney whether he shared the view of Republican senator John McCain that the only thing worse than a military confrontation with Iran would be a nuclear-armed Iran. After pausing to consider his reply, the vice president bluntly declared: “I would guess that John McCain and I are pretty close to agreement.”

Coming from the chief architect of the illegal US-led invasion of Iraq, these words can have only one meaning: the US is preparing for a military attack on Iran. As far as Cheney is concerned, Tehran’s failure this week to abide by the US-backed UN resolution demanding the suspension of Iran’s uranium enrichment facilities is just one more nail in the coffin.

Sheridan, who applauded Cheney’s militarist stance, obviously understood the vice president’s threat. “If I were a mullah in Tehran those words would just about make my blood run cold,” he declared. As Sheridan is aware, a second US aircraft carrier group has just arrived in the Persian Gulf, providing the US military with the capacity to carry out round-the-clock bombing against Iranian targets.

Cheney provided no evidence to back his bald assertion that Iran is seeking to build nuclear weapons. He candidly admitted that the US does not believe Iran has nuclear weapons yet, but added, “we do believe they are working to enrich uranium to levels that would make it possible to produce nuclear weapons”.

The remark is deliberately deceptive. The Iranian regime has repeatedly declared its intention of completing the construction of an industrial-scale uranium enrichment plant at Natanz to provide fuel for its nuclear power plants. Under the Nuclear Non-Proliferation Treaty (NPT), any country has the right to do so. The Natanz facility is monitored by the International Atomic Energy Agency (IAEA), which, despite unsubstantiated US allegations, has found no positive evidence that Iran has a nuclear weapons program.

By intentionally conflating “having nuclear weapons” with “the capacity to produce nuclear weapons,” Cheney is concocting a new casus belli for war. As he told Sheridan: “You get various estimates of where the point of no return is. Is it when they possess weapons or does it come sooner, when they have mastered the technology but perhaps not yet produced fissile material for weapons?”

On this basis, the Bush administration could attack Iran right now. Tehran “mastered the technology” of uranium enrichment last year and produced a small amount of the low-enriched uranium required to nuclear fuel. Iran has also announced plans for a limited industrial-scale facility of some 3,000 gas centrifuges this year. This would be more than enough to meet Cheney’s criterion for war, regardless of whether the plant actually produced the highly enriched uranium needed for bombs.

The US accusations are completely two-faced and hypocritical. The Bush administration gave the green light to India to speed up the manufacture of nuclear weapons by concluding an agreement with New Delhi last year to lift the restrictions imposed following India’s 1998 nuclear tests. Of course, Washington does not insist that its close ally Israel sign the NPT and give up its stockpile of nuclear weapons.

To evoke the menace of “nuclear terrorism,” Cheney resorted to further lies and half-truths. He repeated the unproven claim that the Iranian regime is supplying weapons to anti-US insurgents in Iraq. He denounced Iranian President Mahmoud Ahmadinejad for making “threatening noises to Israel and the US and others”. He condemned Iran as “the prime sponsor of Hezbollah, working through Syria in the conflict with Israel last summer in an effort to topple the government of Lebanon”.

This last accusation is especially cynical. It was Israel, with the backing of the US administration, and Cheney in particular, that unleashed a devastating bombardment of Lebanon, then invaded the south of the country, in a bid to wipe out Hezbollah. Washington viewed Israel’s criminal war on Lebanon as the opening shot of a wider military confrontation with Iran.

For all Cheney’s apocalyptic rhetoric about the Iranian threat, the Bush administration’s targeting of Iran has nothing to do with any of these pretexts. Cheney himself hinted at the real reason when he noted Iran’s strategic location. “They occupy one whole side of the Persian Gulf,” he explained to ABC News, “[and] clearly have the capacity to influence the world’s supply of oil—about 20 percent of the daily production comes out through the Straits of Hormuz.”

The purpose of any US war on Iran, like the 2003 invasion of Iraq, would be to further longstanding US ambitions to dominate the oil-rich regions of the Middle East and Central Asia. Iran with its own huge reserves of oil and gas, not only lies across the Persian Gulf from Kuwait, Saudi Arabia and other major producers, but sits between Iraq and the largely unexploited oil and gas fields of the Central Asian republics.

In his interview with ABC News, Cheney again made clear that the Bush administration has a war on Iran under active consideration. He was asked to respond to a recent statement by British Prime Minister Tony Blair that diplomacy was “the only sensible solution” to the Iranian crisis. After repeating the standard White House line that “all options are on the table,” he was asked if a military solution was realistic. Cheney refused to answer the question, declaring: “I am not going to go beyond where I am... ”

Cheney may be coy about publicly declaring his support for a war, but it is a poorly kept secret that within the Bush administration he strongly advocates this incendiary course of action. In an article in yesterday’s London-based Times, “senior British government sources” expressed their fear that President Bush would seek to “settle the Iranian question through military means” next year if diplomatic efforts failed.

The Times explained: “The hawks are led by Dick Cheney, the vice president, who is urging Mr Bush to keep the military option ‘on the table’. He is also pressing the Pentagon to examine specific war plans—including, it is rumoured, covert action.” A string of reports over the past year have revealed advanced plans by both the US and Israel for a military assault on Iran.

The military preparations have been made, but what is still needed is a pretext for war. That is the significance of Cheney’s remarks, reported in the Sydney Morning Herald, to yesterday’s breakfast with select members of the Australian-American Leadership Dialogue. The issue arose of the Democrats’ opposition to the Bush administration’s war policies, and the far more deep-seated hostility of the majority of Americans to the Iraq war.

Cheney was completely unfazed. According to the Sydney Morning Herald, “It is understood he said the Democrats in the US were riding public opposition to the war that could end up prejudicing their leadership credentials. He said the mood could easily shift if there was another terrorist attack.”

These remarks reflect more than Cheney’s utter contempt for public opinion and democratic norms. He recognises that the beleaguered Bush administration requires more than its present litany of lies to wage a new war of aggression against Iran. To drown out and intimidate widespread public opposition and to energise its own fascistic social base, the Bush administration desperately needs a new terrorist outrage.

In congressional testimony on February 1, former national security adviser Zbigniew Brzezinski openly warned of “some provocation in Iraq or a terrorist act in the US blamed on Iran culminating in a ‘defensive’ military action against Iran that plunges a lonely America into a spreading and deepening quagmire eventually ranging across Iraq, Iran, Afghanistan and Pakistan”.

No one should be in any doubt that the gangster cabal in the White House, with Cheney in the lead, is more than capable of exploiting a new terrorist attack as the pretext for launching a reckless and criminal war on Iran.

See Also:
Cheney's speech in Sydney: An ominous silence on Iran from the US vice president
[23 February 2007]