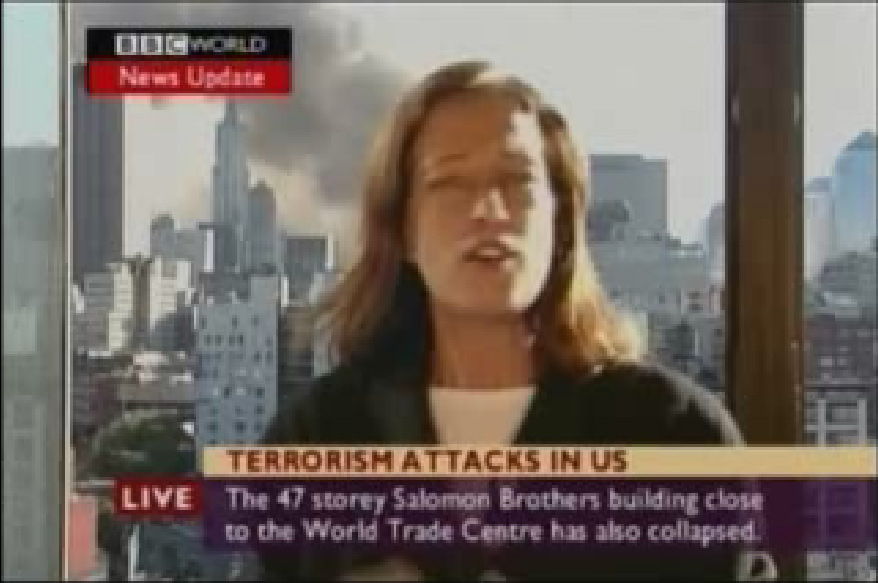 google video has been pulled already

can someone who's already got it post it hear instead of relying on some lame corp site.

That's what indymedia's for, innit?!

will have to kill the bbc.oh it's allready dead

Appears unavailable for some reason on Google. Maybe too connected to. Will give alternative sources when available

So the Beeb is in on the conspiracy too!

The picture at least is quite clear. The newsline says The"Salomom building" =WTC7 has collapsed while it's clearly visible behind her left,penthouse and all
Will retrieve a source as soon as

will have to root through them.anyone got a time for it.

past hour this has been viewed 2300 times

When will you conspiracy theorists go back to the JKF assasination?

Please stop making fools of us all.

It's amazing what the video gives out
The story over the first few minutes
And the unacknowladged prediction that the WTC will fall, before it actually has
Grab this

Please, please will you lot go back to playing Dungeons and Dragons and leave indymedia alone. You are an embarrassment.

"stop making fools of us all"

Many activists are supporters of the main stream media's account of 9/11, they don't want the justification of the Imperial slaughter in the Middle East to be questioned. This is rather sad.

Thankfully there are also activists involved with Indymedia who do question the official fable, for example see this centre column feature articles:

And the "War on Terror" topic:

...inspite of all the hot air being spewed by conspiracy theorists, that 9/11 was the result of Islamic terrorists, who may or may not have been connected to Osama bin Laden, and whom the US govt and intellegence may or may not have know about their plans.

IF that was to be the case, would that still justify the "war on terror", the slaughter for millions across the world? No it bloody doesn't. It was a pretty handy thing to happen, I'll give you that, to allow the neocons to whip up a frenzy regardic "Arabic turrists", and the end result is all too obvious, with Iran next on the list. It suited PNAC's need for a "Pearl Harbor" to revitalise its defence industry.

But whatever really happened is academic at the end of the day, the thing was that it did happen and allow the PNAC neocons to go ahead with their evil plans.

This is as far as I will go, as I don't want to embroil myself in a debate about "whodunnit" regarding 9/11, since the end result is always the same, the same old circular arguments with neither camp willing to budge. I now wait for the imminment accusations of "spook" "plant" "(insert US/UK intellengence agency here) agent".

You don't want to embroil yourself in a debate about the events of 911.

Can one ask then just what exactly your purpose in adding to this thread is?

Did your ego get loose and demand that you say something ... anything ... just so long as we all focus on you for a short while? Or is it more complicated than that?

As for the dreary 'nothing to see here' brigade, with their usual amateur psycho-analysis ... there are plenty of un-natural and anatomically impossible acts you could amuse yourselves with, rather than display your ignorance here ... so go play and let the adults alone for a few minutes.

If it were your people/country/tribe having the shit bombed out of it, my guess is that you would want the truth to come out IMMEADIATELY ...

The truth about 911 is pivotal

So many thousands of people turn a blind eye to the US/UK genocide-facilitating debacle because they are transfixed by the official conspiraloon theory that a bunch of Muslims did it for evil purposes and that the war on terror is therefore entirely justified. Many of these are people who feel that something is really wrong with how the US/UK have responded, the dramatic crack down on human rights and civil liberties in the so-called ambassadors for liberty and democracy. Many of these people are burning inside with a rage at the gross inhumanity that the war on terror has brought forth, feeling ashamed at what the US/UK are doing in their defence of freedom. For these people, in addition to those who lose loved ones and swathes of their communities as a consequence of the US/UK brutality and tyranny, these people deserve to know the truth; for many, knowing the truth will serve as that trigger, that lightening rod to begin to critically re-evaluate where they position themselves. That positioning will be vastly different if all those nagging questions regarding 911 are finally cleared up and the Muslim terrorists really did do it than if it is revealed that the US government was somehow complicit before or after the fact in 911. In the former case, many people will find a renewed sense of commitment to the war on terror. In the latter case, many people will rise up against the US/UK war of terror and this could lead to a significant change in the socio-political landscape.
I'd say that uncovering the story of 911 is critical to any reactionary movement and may boost the human capacity for the burgeoning resistance probably more than any recruitment and awareness-raising event ever could.

Yeah why don't you stop making fools of these dead brained jerks, 911 is now History I don't think it matters
that the sheeple think that WTC complex was destroyed by a couple of cave trolls.
The important question is what will the next 911 style scam ??
I always fancied a barge full of explosives up along side the old HP sink it at high tide and then let her rip should while they are all in the bar on late night duty, should also flood the Tube, couple of Iranian sea captains
seen escaping on flying carpets, sounds better than the official 911 and I have only been on the case for less than five minutes

Paul Watson of Prison Planet has a well constructed rebuttal to the BBC's ridiculous story which only manages to dig them a deeper hole.