Yesterday two groups of citizen weapons inspectors visited the offices of profiteers along the nuclear chain (from uranium mining to missiles). 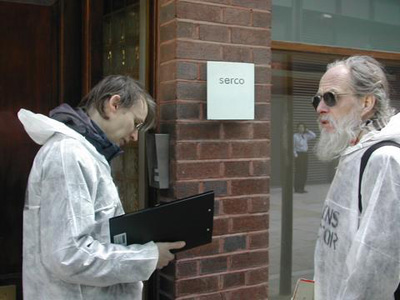 outside one of serco's offices

Press release from group to follow (I think...). But here's the basics:

In a day called by the Trident Ploughshares Muriel Lesters affinity group, two groups of "inspectors" spent the day visiting the offices of...

- Serco (part of joint venture company AWE-ml who have 25-yr contract to run AWE Aldermaston, home of Britain's nuclear warhead production);
- Rolls Royce (make nuclear power plant/steam generator for Trident submarine fleet - and the next lot, presumably);
- BNFL (all round bad guys - and Sellafield supplies Pu for the warheads);
- Lockheed Martin (lease Trident D5 missile to the UK government .. and, another of the three comapnies who make up AWE-ml and run Aldermaston);
- Rio Tinto (mine uranium on aboriginal lands, amongst many other generally bad things)

.. and asking annoying questions .. and generally being in the way.

No-one arrested, though some interaction with police/security.

TP are calling a blockade on 10 April at Aldermaston, see

For more info on just how evil serco are


For details of events on forthcoming parliamentary debate/vote day on Trident, see