BBC Reported WTC-7 Had Collapsed 20 Minutes Before It Fell

An astounding video uncovered from the archives today shows the BBC reporting on the collapse of WTC Building 7 over twenty minutes before it fell at 5:20pm on the afternoon of 9/11. The incredible footage shows BBC reporter Jane Standley talking about the collapse of the Salomon Brothers Building while it remains standing in the live shot behind her head. 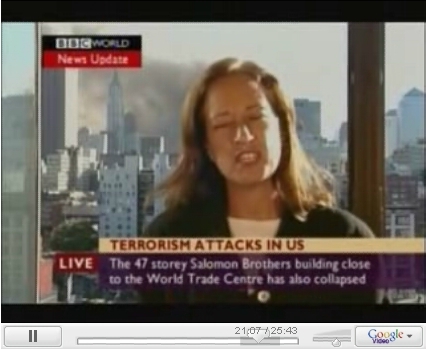 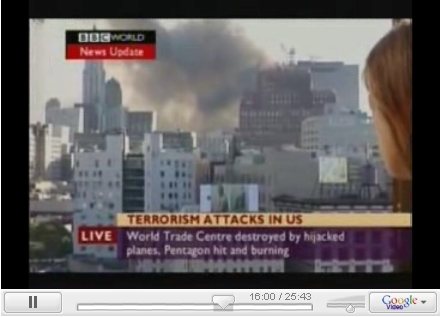 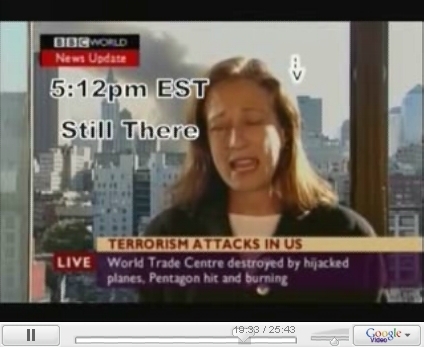 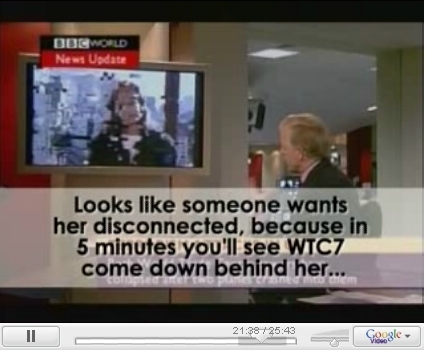 An astounding video uncovered from the archives today shows the BBC reporting on the collapse of WTC Building 7 over twenty minutes before it fell at 5:20pm on the afternoon of 9/11. The incredible footage shows BBC reporter Jane Standley talking about the collapse of the Salomon Brothers Building while it remains standing in the live shot behind her head.

Minutes before the actual collapse of the building is due, the feed to the reporter mysteriously dies.

This amazing clip was on Google Video, but was removed within hours of the story breaking. However, hundreds of people had already managed to download the clip and it has gone viral on the Internet and the censors won't be able to shut the lid this time. A You Tube upload is available but we fully expect this to be removed soon. You can watch it for the time being at

To be clear, the Salomon Brothers Building is just a different name for Building 7 or WTC 7. Skip forward to around the 14:30 minute mark.

Although there is no clock or time stamp on the footage, the source claims the report was given at 4:57pm EST, 23 minutes before Building 7 collapsed at 5:20pm. While the exact time of the report cannot be confirmed at present, it is clear from the footage that the reporter is describing the collapse of WTC 7 while it clearly remains standing behind her in the live shot.

The fact that the BBC reported on the collapse of Building 7 over twenty minutes in advance of its implosion obviously provokes a myriad of questions as to how they knew it was about to come down when the official story says its collapse happened accidentally as a result of fire damage and debris weakening the building's structure.

As we have documented before, firefighters, police and first responders were all told to get back from the building because it was about to be brought down. It is widely acknowledged by those who were there on the scene that warnings were issued for people to evacuate the area in anticipation of the building's collapse, with some even stating that a 20 second countdown preceded the collapse of the 47-story skyscraper, again clearly suggesting that it was taken down by means of explosives as the video footage of its implosion illustrates.

Here are some further screenshots from the video.