There has been a deafening silence, however, over the fact that Muslim men are being held in similar conditions in Melbourne and Sydney, with the bipartisan agreement of both major political parties. 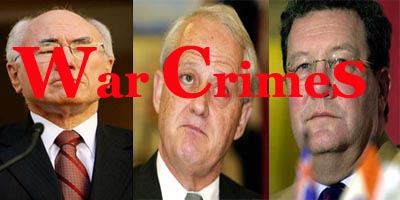 On March 5, almost exactly 16 months after they were arrested, nine Muslim men will finally be brought to a Sydney court for committal hearings on charges of “conspiring to prepare a terrorist act”. Since November 8, 2005, they have been incarcerated in Guantánamo Bay-style isolation cells.

The nine men were arrested, along with 10 others, in Melbourne, in the largest police raids ever conducted in Australia. In their immediate aftermath, the media ran lurid claims from government leaders and police that they had prevented an imminent and “catastrophic” terrorist attack. On the basis of unsubstantiated police allegations, Rupert Murdoch’s newspapers and other media outlets accused the men of “stockpiling” weapons and explosives, planning “violent jihad” and discussing “dying for holy war”.

Yet it has taken until now for the prosecutors to gather and prepare their case. Lengthy interrogations, and further raids and arrests have been conducted in “fishing expeditions” to try to get evidence. After repeated delays, the committal hearings will be held during the final three weeks of the campaign for the March 24 New South Wales state election. They are expected to last for up to three months, but the opening weeks—in the heat of the election campaign—are likely to be dominated by the airing of untested police allegations.

The joint federal-state raids by police and Australian Security Intelligence Organisation (ASIO) officers on November 8, 2005 bore all the hallmarks of a highly-orchestrated campaign aimed at overcoming mounting public opposition to the unprecedented anti-terrorism bills that were being pushed through federal and state parliaments by Prime Minister John Howard and his state and territory Labor counterparts.

Just days before, on November 2, Howard had declared a terrorist “alert”, which was used to justify the convening of a special sitting of the Senate the next day, November 3, to ram through the first instalment of new legislation. At Howard’s insistence, the Senate passed an amendment substituting the words “a terrorist act” for “the terrorist act” in all federal anti-terror laws passed since 2002.

The amendment allowed people to be arrested and jailed, potentially for life, without the prosecution having to prove that any specific terrorist act was being prepared, let alone carried out. In December 2005 the new anti-terror bills were passed in their entirety, undercutting the principle of habeas corpus—no detention without trial—by introducing two new forms of detention without charge, including “control orders”—a form of house arrest. They also outlawed “advocacy” of terrorism, and expanded sedition to include voicing support for groups resisting Australian military interventions, such as those in Iraq and the South Pacific.

The men arrested in Sydney became the first victims of the November 3 amendment. Their charge—“conspiracy to prepare a terrorist act”—is so sweeping that it requires no evidence of any location, date or method for the alleged terrorist plan. “Conspiracy” itself is a notorious catchall charge to which police resort when they have no concrete evidence of any wrongdoing.

The NSW and Victorian governments have ensured that the arrested men have been consigned to the worst isolation cells in “super-max” high-security prison units. Even though they are only on remand, and have not been convicted of any offence, they have automatically been assigned to a new draconian “AA” prisoner classification. On the pretext that anyone charged with a terrorist offence is a “threat to national security,” they have been classified more severely than prisoners convicted of murder.

The prisoners wear orange overalls, as in Guantánamo Bay, and are shackled whenever they are moved or brought to court. They are confined to their 2 x 4-metre cells for 16 to 22 hours a day, and 24 hours a day during prison lockdowns, with severely limited contact with other human beings, even fellow inmates. Visits by loved ones and lawyers are restricted and tightly monitored. Their personal property is minimal and they are subjected to regular searches and cell checks. All mail is opened and phone calls tapped. Without warning, they can be moved to other prisons, or interstate.

The men can make no appeal to a court or independent body against the AA classification, their prison conditions or maltreatment, and they have no access to the official prison visitor. Lawyers must undergo security checks by federal and state authorities in order to see them, and are not allowed private conversations with them, in violation of lawyer-client privilege. The purpose of this regime is to break the prisoners emotionally and psychologically.

The NSW government has boasted of leading the way nationally in adopting the AA category. Answering a question in state parliament in June 2005, Justice Minister John Hatzistergos stated: “In October last year New South Wales became the first state to enact a special classification for terrorist inmates when we created the Crimes (Administration of Sentences) Amendment (Category AA Inmates) Regulation 2004.”

Last month, the state government flatly rejected an upper house parliamentary committee inquiry recommendation to review the classification. A former judge, Peter Moss QC, who headed the government’s Serious Offenders Review Council, told the inquiry in 2006 that the regulation could be invalid. The NSW Council for Civil Liberties called for the abolition of the AA category, telling the inquiry: “In international law, national security is not a legitimate ground upon which to discriminate against remand inmates.”

The Council also said the “degrading and humiliating” orange overalls and the sub-standard conditions amounted to “cruel and inhuman treatment,” contrary to Article 7 of the International Covenant on Civil and Political Rights. It said it had received reports of self-harm and hunger strikes and disturbing complaints, such as no access to fresh air or sunlight, lack of heating and denial of adequate medical care.

Ross Hudson, the lawyer representing one of the detained men, Moustafa Cheikho, told the World Socialist Web Site his client was being held in “supremely onerous custody for an innocent person”. On New Year’s Eve, Cheikho had been assaulted, allegedly by a prison guard. As a result, Cheikho was injured and placed in a segregation and surveillance cell for 10 days. Hudson said he could say no more, because the incident was being investigated by the Department of Corrective Services.

Greg Walsh, representing Omar Baladjam, has twice previously accused prison guards of assaulting and abusing his client and denying him medical treatment. Walsh said guards had “seriously assaulted” Baladjam last September after earlier tormenting him about his religion and subjecting him to frequent and offensive strip searches. Numerous letters of complaint had been sent to the corrections department, but no action had been taken.

Despite the protracted delay in their case and the inhuman conditions of their incarceration, the nine men have been denied bail. The state and federal counter-terrorism laws have scrapped the presumption in favour of bail. It will only be granted if a prisoner can prove “exceptional circumstances”.

Part of the reason for the delay has been prosecution efforts to bar defence lawyers from seeing key evidence. Preliminary legal argument over such issues was closed to the public earlier this month, after ASIO director-general Paul O’Sullivan submitted a signed affidavit declaring that sensitive security material would be disclosed.

Substantial parts of the committal hearings are also likely to be conducted in secrecy, preventing public scrutiny of the evidence and the police-ASIO operation behind the prosecution. Federal legislation passed with Labor’s backing in 2004 permits the government to require closed courts whenever it certifies that “national security” would be affected.

Judges can allow government witnesses to testify in disguise via video and, in some circumstances, exclude defendants and their lawyers from proceedings. These provisions violate the centuries-old legal rights of an accused person to hear all the prosecution’s evidence, cross-examine its witnesses to test their veracity and credibility, and expose its case to public examination.

If the men are ultimately committed for trial, lawyers predict it will not start until 2008 and could take more than a year to be completed. The WSWS is still in no position to independently assess the case against them, but all the circumstances point to a politically-timed prosecution, on vague and flimsy charges, to arouse fears of terrorist plots.

Over recent months, the shift in public sentiment against the Iraq war and the entire bogus “war on terror” has compelled various politicians and media outlets to express concern about the shocking conditions in which Australian citizen David Hicks has been held at Guantánamo Bay for the past five years, and the “kangaroo court” military commission that will decide his fate.

There has been a deafening silence, however, over the fact that Muslim men are being held in similar conditions in Melbourne and Sydney, with the bipartisan agreement of both major political parties.