documentary: Reclaim Power - voices from the camp for climate action 2006

In the summer of 2006, 600 people convinced that there is no time to waste set up a Camp for Climate Action in the shadow of one of the biggest C02 emitters in Europe: Drax coal-fired power station in Yorkshire / UK. Cine Rebelde produced a documentary film about the camp. 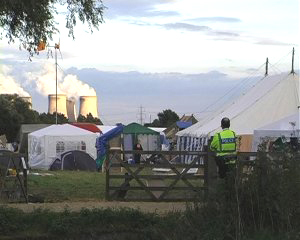 Climate change is now a reality. Leading scientists across the world agree that in a ’business as usual scenario’ we have no longer than 10 years to prevent 2-3 degrees of additional global arming that will lead to irreversible climatic changes with dramatic consequences for our planet.

However, in a world driven by profit and committed to unlimited economic growth, humanity seems very unwilling to change the course of the fossil fuel economy.

In the summer of 2006, the 5th hottest year ever recorded in recent history, 600 people convinced that there is no time to waste set up a Camp for Climate Action in the shadow of one of the biggest C02 emitters in Europe: Drax coal-fired power station in Yorkshire / UK.

With over one hundred workshops on a wide range of topics, the 10 day camp was a space of collective learning, sustainable living and taking direct action on the root causes of climate change. The gathering that showed practical low energy solutions in action, culminated in a day of protest and mass direct action in an attempt to shut down Drax.

a cine rebelde production in cooperation with

indymedia reports of the Camp 2006:

DVDs will also soon be available from rising tide, climate camp groups and at the meeting in Bristol.

yeh climate change is the most serious problem we have with capitalism at the moment,although nanotechnology & convergence have potential to be as dangerous, if not more.
lets not just keep focused on the enemy who are the root of it all,after waking people up with this issue,
capitalism, G8 & more importantly the corporate oligarchy behind it

when anarchism & our syndicalist worker unions were the most popular & biggest ever threat to american capitalism it was before & around the depression era, they did not just target the puppets, no they went for the oligarchs like the Rockefellers, goddam robber barons everyone hates