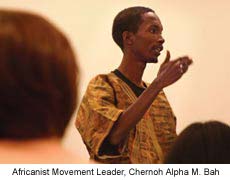 The ASI calls on all who receive this document to forward it to as many contacts as possible and to call and email the nearest Sierra Leonian embassy immediately to protest the arrest and political harassment of Chernoh Alpha M. Bah and the leadership of the Africanist Movement. There is no cutoff time when these calls and email messages should stop. Please help us keep track of this mobilization by emailing us at

uhuruasi@aol.com to let us know that you were able to call-in and/or email!

Earlier today, March 6, 2007, Chernoh Alpha M. Bah, Director of the Africanist Movement a regional African Internationalist organization based in Sierra Leone and several neighboring "countries" was stopped while driving in Freetown, capital of Sierra Leone. The two police women who stopped the car carrying Chernoh Alpha M. Bah and two other persons said they got a radio message to stop the car for previously refusing a police order to stop.

The men were detained for four hours by the police and the car's driver had his license confiscated by the police. The men were charged with “defying police officers” and “driving without paying attention.”

The police have told them that they must come to the police station on March 7 at 10 am to answer “certain questions” before their court hearing at 2 pm.

The charges are completely false. They never disobeyed a police order to stop as should be obvious by the fact that they did stop for the police women when they were asked to do so.

The attack on Chernoh Alpha M. Bah is directly tied to his political activities in the region, especially in Guinea-Conakry where the Africanist movement has played a role in protesting the neocolonial regime presiding over the growing emiseration of the people there.

The fact is that the demands of the Africanist movement calling for economic, political and social justice in Guinea-Conakry have made all the neocolonialist governments in the region nervous because of the obvious implications they have for all of the neo-colonial regimes and their imperialists sponsors. This is especially true for Sierra Leone that only recently suffered a spontaneous teachers' strike.

We demand the immediate cessation of the harassment of Chernoh Alpha M. Bah and the Africanist movement.

We demand that all charges be dropped and that the security of Chernoh Alpha M. Bah, the men arrested with him, as well as the entire membership of the Africanist movement be guaranteed by the government.

We demand that the Africanist movement and the people of Sierra Leone be allowed the rights of freedom of speech, press and political association.

Call in and/or email to the Sierra Leonian embassy nearest you to make these demands and defend the Africanist Movement and its leaders.

For those in the U.S., the contact information for the Sierra Leonian embassy in Washington D.C. is as follows: