Whatever the outcome of the Federal Court application, the Howard government stands indicted as an accomplice in war crimes, committed in pursuit of oil and gas resources, and US global hegemony. 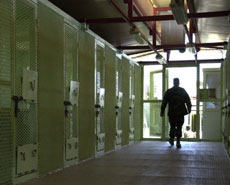 The Howard government argued in the Australian Federal Court last week that it had no legal duty to protect Guantánamo Bay detainee David Hicks—or any other Australian citizen—from detention, torture or abuse. The government’s position made clear its intent to continue overriding the most basic legal and democratic rights, under the aegis of the fraudulent “war on terror”.

Just last week, Prime Minister Howard made clear that he was aware that the US would release Hicks if the government requested it, and then repeated that no such request would be forthcoming.

David Hicks has been illegally incarcerated, in flagrant breach of the Geneva Conventions, for more than five years. He was first seized by Northern Alliance warlord elements in Afghanistan in November 2001, soon after the US invasion of that country. He was sold to the US military for a bounty, beaten and tortured, and taken to Guantánamo Bay, where he has been further abused and held in solitary confinement.

It was not until June 2004 that trumped-up charges were laid against him. Two years later, in June 2006, even these had to be abandoned when the US Supreme Court ruled that the Bush administration’s military commissions were illegal because their rules and procedures flouted the US Constitution and international law.

In what now amounts to an admission that the case against Hicks has always been baseless, all the charges against him have been dropped and replaced by a new and vague charge of “providing material support to a terrorist organisation”. In 2001, this was not an offence under US or Australian law. Yet, Hicks will face the “kangaroo court” military commissions having been retrospectively charged.

Hicks’s lawyers commenced an action in the Federal Court last December accusing Howard, Attorney-General Philip Ruddock and Foreign Affairs Minister Alexander Downer of breaching their “protective duty” to Australian citizens overseas by failing to bring about a fair trial for their client.

They also invoked traditional legal principle, charging the government with relying on an “irrelevant consideration”—that Hicks could not be charged in Australia because his alleged activities were not illegal when he was captured in 2001. The Howard government has repeatedly stated that Hicks must face a US military commission, precisely because he has committed no crime under Australian law!

The claim further accused the government of failing to request that US authorities give Hicks minimum protection under the Geneva Conventions, the International Covenant for Civil and Political Rights and the Universal Declaration of Human Rights.

Acting on the government’s behalf, Solicitor-General David Bennett, QC, vigorously opposed hearing the case on an urgency basis last December, saying it was “grossly unreasonable” to ask judges and lawyers to give up their annual break. This from a government that has been instrumental in Hicks’s unlawful detention for five years!

When the case finally got to court on February 26, Bennett applied to have it struck out immediately on the grounds that it had “no reasonable prospect of success”. He declared that an obligation for the federal government to protect citizens abroad “is simply something that the law has never recognised”.

Even the judge, Justice Brian Tamberlin, was taken aback. He commented: “There’s not much of a trade-off: you can be conscripted to fight overseas, but if you are taken overseas (and detained) there’s no duty (for the government to protect you).”

Tamberlin also asked whether the issue was simply one of foreign policy, as the government submitted, or raised breaches of human rights.

Bret Walker, SC, for Hicks, said the prime minister, attorney-general and foreign minister had shown they had control when they stated that the US would release Hicks if they requested it. He told the court that, as a citizen, Hicks was entitled to an ancient right that the government at least considered asking for his repatriation, a move that the government had rejected.

Tamberlin reserved his decision on the government’s application to strike out the case, saying it raised complex questions. No date has been set for his ruling.

Outside the court, Hick’s solicitor, David McLeod, made the point that if the Federal Court had no jurisdiction over Hicks, no court in the world could oversee his treatment in Guantánamo Bay. That is because the Bush administration, with Democratic Party support, last year introduced legislation stripping the detainees of their fundamental legal and constitutional right to apply to US courts for habeas corpus rulings against their illegal imprisonment.

Major Michael Mori, the US military lawyer representing Hicks, said he found the government’s arguments “strange and foreign”. He said US citizens could not be detained without charge as Hicks had been. “It’s frustrating for me to see an Australian being abandoned and being pushed towards a cliff for this system that is not acceptable for Americans.”

As the case opened, eminent lawyers, including former Family Court Chief Justice Alistair Nicholson, issued public statements declaring the US military trial planned for Hicks to be invalid and incapable of delivering a fair hearing. They pointed out that by pushing for such an unlawful sham, Howard, Ruddock and Downer were guilty of crimes against the Australian Criminal Code, as well as international law.

Members of the public flooded media outlets with angry denunciations of the government’s assertion that it owed citizens no duty of care. One comment posted on the Melbourne Age blog site stated:

“The government (and the world in general) should absolutely step in. If Hicks (1 guy) can be charged with ‘materially aiding terrorists’, then so can just about every American government, the CIA and their cronies going back decades. I assume that funding death squads in Central America, supporting Saddam Hussein for years and training Osama Bin Laden should also be counted as materially aiding terrorists.”

Another said: “This is a kangaroo court and justice will never now be served. There is no justice to be had in this process. Bring him home and release the man. Enough is enough.”

Whatever the outcome of the Federal Court application, the Howard government stands indicted as an accomplice in war crimes, committed in pursuit of oil and gas resources, and US global hegemony.

The Socialist Equality Party is standing in the NSW election as part of its struggle to defend and extend fundamental civil liberties and democratic rights. We demand the repeal of all the so-called anti-terrorism laws passed since 2001 and the immediate and unconditional release of David Hicks and every detainee in Guantánamo Bay and other secret US detention camps. Those politically responsible for these outrages committed in the “war on terror”—including Howard and his cronies—must be placed on trial for war crimes.