Early in the morning of March 6th, high court bailiffs and police moved in to evict the Vortex Occupied Social Centre. The old Jazz bar on Stoke Newington Church Street, North London, had been occupied since the beginning of the year and had been open for numerous and varied community events [ 1 | 2 | 3 ].

On Saturday 10th, a solidarity demonstration against the eviction took place in Stoke Newington [Pics] 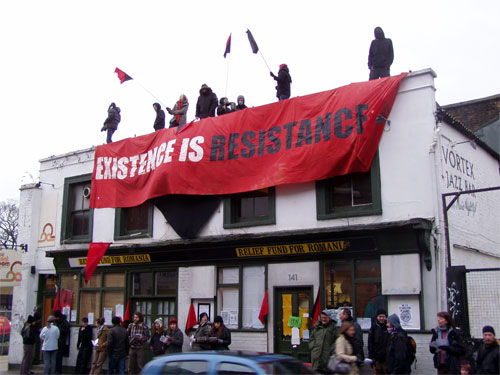 The building was previously the home of the world-famous Vortex Jazz Club until notorious Hackney landlord and property developer Richard Midda bought the Vortex and threw the Jazz Club out. Midda's intention is to turn the venue into a retail outlet, possibly with luxury flats above. Rumour had it that Starbucks was interested in opening one of its lookalike corporate coffee shops on the site.

In response to the threat of a Starbucks in Stokey, local residents formed Church Street Community Action Group, which is committed to preserving the unique and non-corporate character of Church Street. Starbucks subsequently claimed to have "no plans" to open a coffee shop on the Vortex site, although it remains to be seen whether they will change their minds now the building is conveniently empty.