SOCPA - some justice as babs is back in town

for the past few weeks, barbara tucker has been subject to wholly disproportionate bail conditions denying her the right to enter a 1km area around parliament. today, justice prevailed in a hearing at southwark crown court, where the judge, clearly appalled at the restriction, lifted all conditions and allowed her to return and peacefully protest outside parliament and downing street 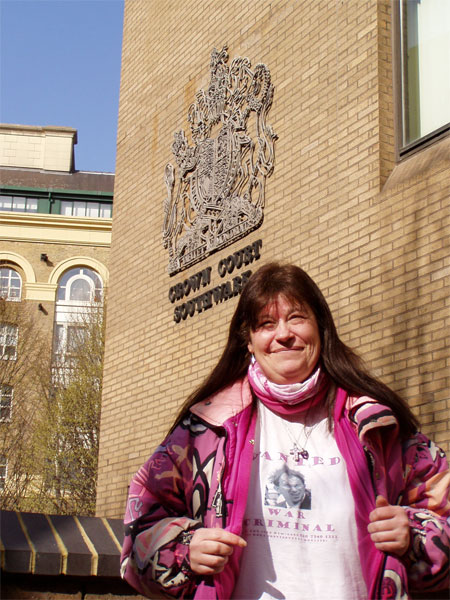 barbara after the court verdict 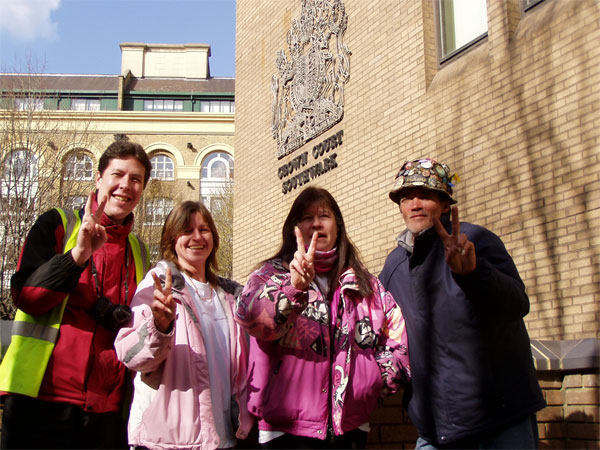 with supporters including brian haw 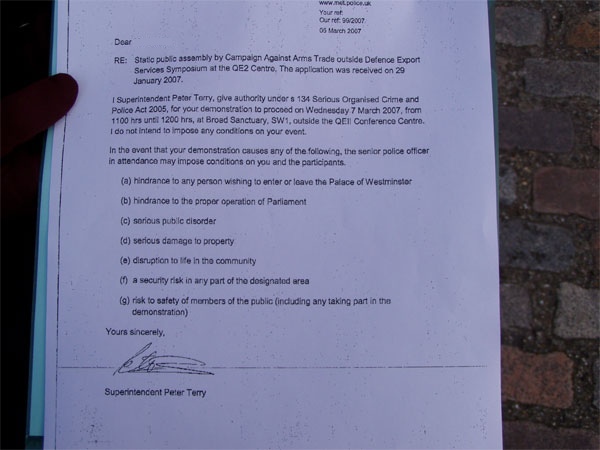 the prosecution read out unsubstantiated police evidence about barbara's conduct on 31st january which led to the bail conditions. they claimed she had been abusive, had assaulted a police officer by punching him, and had tried to kick him. all this while the poor police were trying to stop her from jumping in front of the prime minister's car.

but the trouble with all this "evidence" is that in a recent pre-trial hearing at horseferry road, when barbara's defence said that they'd be needing all the police officers for cross-examination on the basis that they had perjured themselves with knowingly false evidence, the prosecution offered to withdraw ANY statements the defence wanted, and to lessen the alleged charge from "assaulting a police officer" to "resisting a police officer". starts to look a bit shaky then doesn't it?

next in court today, the prosecution tried to bring in other pending allegations against barbara. mysteriously, (perhaps because these all look extremely shaky now?), they didn't mention any one of the more than seventy 'reports for possible summons for unauthorised protest', and instead concentrated on other alleged misconduct.

first they brought up a supposed 9th july 'assault on a constable'. the trouble with this one is that it was dropped with "no further action" later that same month. next, they brought up a 22nd november alleged assault on the police, and a 24th january alleged "obstructing a police officer". judge wadsworth asked what was the current status of these allegations, and when he was told that barbara was still under police bail while they were being 'investigated', he asked why there had not been any charge yet after three and a half months and six weeks respectively. this brought some chuckles from the public gallery, and a knowing smile even came across the judge's face.

the game was up, and despite the prosecution's half-hearted attempt to throw in a 'penalty notice' for alleged 'abusive behaviour' from the 18th september last year, the judge was ready and willing to hear from barbara's defence barrister, david emmanuel, from garden court chambers.

mr emmanuel told the court that barbara's protest had begun on a more or less permanent basis in may last year, and that she was a peaceful protester highlighting the travesties of international justice that constituted our war on iraq. he pointed out that in the nine months of her protest, and despite numerous allegations about her conduct, this was the very first matter to come to charge. since the court must be satisfied that any condition was absolutely necessary to prevent further crime, the court could not really count one clearly dubious charge in 9 months as in any way constituting compelling evidence of further likely misconduct. he also added that if the police had clear evidence against her over other matters, then they should have proceeded sooner with charges.

he also pointed out that barbara had complied with the draconian bail condition so far, even applying for two variations, which were granted. the first of these had been to allow her to attend her own pre-trials hearings and any trials (horseferry road court lies inside the socpa zone, and in his enthusiasm for injustice, judge snow had even prevented her attending her own cases!). the second adjustment was to allow her to attend a political awards ceremony at the channel 4 building (where brian haw collected his award for 'most inspiring political figure of 2006' as overwhelmingly voted by channel 4 viewers).

finally mr emmanuel brought up article 11 of the human rights act (the right to peaceful assembly), and asked whether it was proper and proportionate to stop her from peaceful protest.

judge wadsworth asked when her trial was, and was told it was not until may. the prosecution tried one more attempt to discredit her, claiming she'd tried to throw herself in front of the prime minister's car, but the judge pointed out that since this hadn't been charged or trialled it was not an issue.

he then without hesitation discharged the bail condition, thus questioning the fairness and judgement of the original magistrate, district judge snow, whose conduct throughout her pre-trial hearings has been bizarre and suspect.

so barbara can once again peacefully protest in parliament square, that is until the police think up some more spurious charges or engineer another attack on her. her lawyers are still trying to recover her wonderful pink banners from the police, who are holding them without charge somewhere at charing cross police station. but then we know that cx police like stealing protest placards - they spectacularly did so last may when they removed most of brian haw's display after he failed to comply with conditions set by superintendent peter terry. but in court in january, peter terry was told that when the socpa act states the 'commissioner' must authorise and may impose conditions, it clearly does not mean a lowly superintendent can, and so the police raid had been wholly unlawful.

despite hearing this judgement in court, the lawless superintendent is still regularly flouting the law by sending out pompous letters to demonstrators who have notified, stating "i, superintendent peter terry, give authority under s134 serious organised crime and police act 2005 for your demonstration to proceed......". he needs to actually read section 134, and also remind himself what judge purdy ruled in court in january. peter terry doesn't have the authority - he has no more authority than a sewer rat. i suppose the good thing is that anyone receiving conditions from him are safe in the knowledge that they can completely ignore his conditions as they are unlawful and unenforceable. theoretically though, anyone notifying a demo and then receiving his authority to proceed, should turn themselves in shortly after demonstrating as they have not had authorisation from the commissioner and are therefore breaking the socpa law. maybe an idea for mark thomas's next mass lone demo?

what a legal mess it all is! this law MUST GO.