The University of Nottingham's Amnesty International Society's held a protest against the continuing human rights abuses at Guantanamo Bay. On Saturday the 10th of March folks dressed in orange jump suits re-created a Guantanamo scene on Long Row in Nottingham with people caged in.

It is now over five years since the first detainees were transferred to the detention camp and despite widespread international condemnation, hundreds of people from more than 30 nationalities remain there: without charge and with little hope of obtaining a fair trial. Alan Simpson, MP for Nottingham South, joined in the protest about half way through. 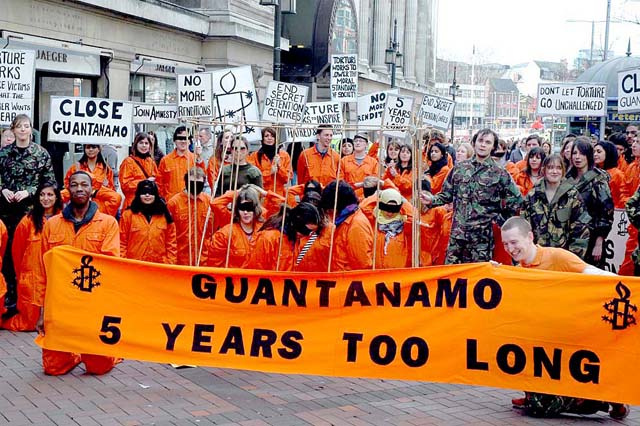 Concurrent with this demo, a contingent of the orange ones, went to the local Starbucks Coffee House, in Clumber Street. Starbucks has an outlet in Guantanamo Bay. They proudly support the US military.

According to the US Administration, the prisoners in Guantanamo may never be granted a trial, either military or civil, and may be detained until the end of the war on terrorism (i.e. indefinitely).

The use of certain interrogation techniques and the dehumanising conditions prisoners have to endure have been labelled as torture by many, including Amnesty International.

For information on other actions linking Starbucks with Guantanamo see the following links:

Confessions obtained through torture are meaningless

Don't get too excited though. After undergoing the hell of Guantanamo and procedures such as 'waterboarding' (near drowning whilst immobilised) I think I'd sign whatever the CIA gave me too. It's rather handy that Khalid Sheikh Mohammed seems to have 'fessed up to just about every terrorist act going:

· I was member of al-Qaida council

· I was director for planning and execution of 9/11, from A to Z

· I was commander for foreign ops

· I was directly in charge ... of cell for biological weapons, and follow-up on dirty bomb ops on American soil

· I was responsible for Bali bombing

· I was responsible for operations to destroy American vessels in the Hormuz, Gibraltar, and Singapore

· I was responsible for planning operation to destroy Panama canal

· I was responsible for planning assassination of ex-US presidents, including Carter and Clinton

· I was responsible for planning operation to destroy Heathrow, Canary Wharf and Big Ben

· I was responsible for operation to assassinate President Musharraf

Reliable evidence though? Hardly. That's probably why he was tried in total secrecy.

How much longer will this shit go on?