Greece: Students' parents clash with the police outside the court

Athens Court, Monday: Parents clashed with the police outside building 7, were the the minor charges are facing trial. The conflict started after some parents tried to enter the building, and they were pushed away by the cops. The conflict spread around and the cops started hitting. The cops sprayed some parents on the face, one parent collapsed and another one was transferred to the hospital.
Photos posted in Indymedia show a cop hitting, by holding his baton the way round, which is strictly prohibited. 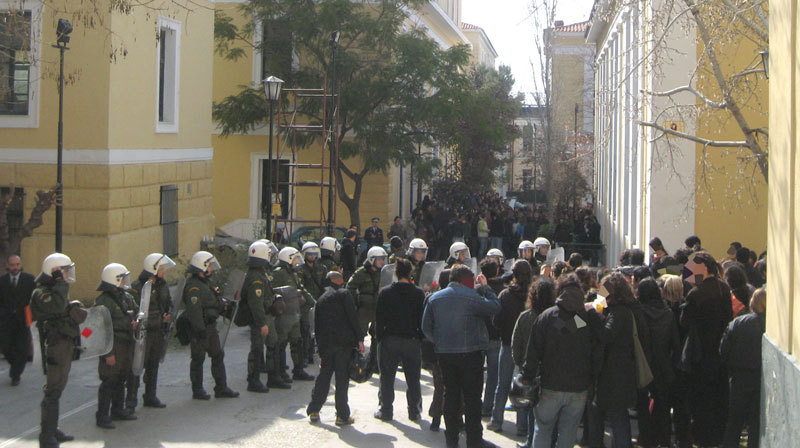 After they juries had their break, a blond female cop announced the names of the 49 arrestees while people were shouting "innocent- worthy" for each one of them, while others added names such Pretenderis (journalist), Marietta (education minister), Kostakis (prime minister) and the rest of the audience added "guilty!". As the procedure started, they didn't allow some parents to enter, with the excuse that there is not enough space. The parents started getting annoyed and the first protests started, meanwhile, the defense witnesses weren't allowed to enter either, since they had the 3 accusation witnesses-cops instead.

After a while a young woman got out and announced that there are 80 seats in the room, while on the 49 the arrestees are sitting while the rest of them are occupied by undercovered cops. The crowd goes mad and start shouting for entering the room. In front of the cops, though, there were the parents, who are really angry now. People start pushing and two cups of coffee forced the cops to step back while being pushed. Then a squad arrives and starts spraying wherever (mostly on the parents), the crowd step back and the same young woman goes out again and the asks for a doctor; results: one mother fainted and a father was transferred to the hospital in an ambulance.

In less than one hour they bring Aspiotis, who had been arrested earlier in the morning. As they brought him, they took him running to the Public Prosecutor, like if they were chased, while a squad take places at the same time. A journalist of Alter Channel tried to go through, a cop pushed her, she attacked him and knocked him, he defended and at the same time all the journalists intervene, by shouting at the cops; the supervisor came and let all the journalists in, but they kept shouting; the advocates also intervened and things got better. At some point a specific riot policeman, who denied being IDed, was order to leave the place; the journalist went after him; she was stopped, the journalists intervened again, it was fun. Half an hour later the squad was ordered to leave (!!!) while some protesters were still gathered by the place. The journalist keeps chasing the riot policeman, who, protected by a squad of smurf cops, started shouting at her "I know my job and my duty; what's your duty and your professionalism" and other staff, equally amusing. At that time there were 90 protesters, 30 on the side of the Public Prosecution Office, and another 60 on the square in front of the entrance. 3 police patrols were between them, along with a lot of blue and green cops. This kept going till 7pm, more or less.

The fact that chemicals were sprayed right outside the Court is actually illegal, while as the media reported, the chemicals were breathable also within the court room. Therefore, the Public Prosecutor ask the police to report for the incident.
A riot policeman was hitting the demonstrators by holding the baton the way round, which is strictly prohibited as it can be lethal. The photos posted in IMC were rebroadcasted by all the mainstream TV news, which didn't refer to the indymedia. 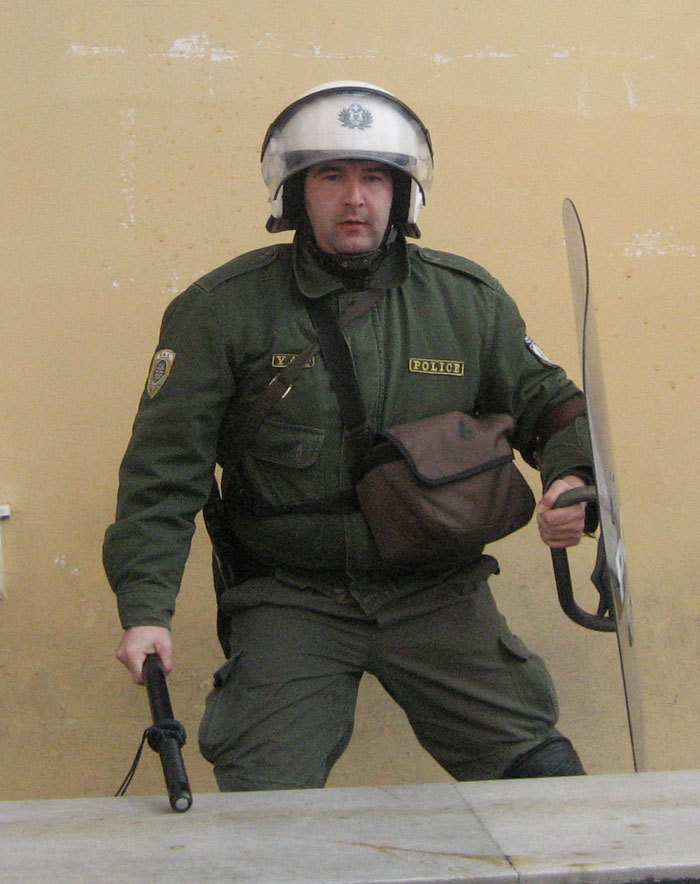 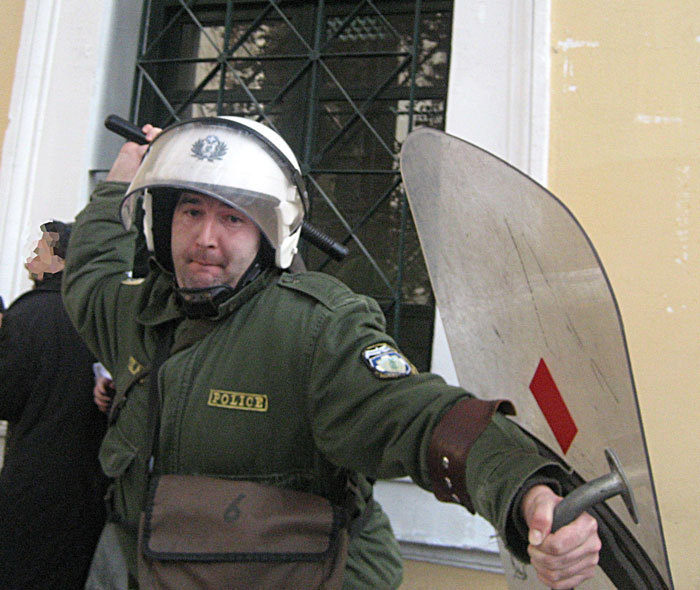 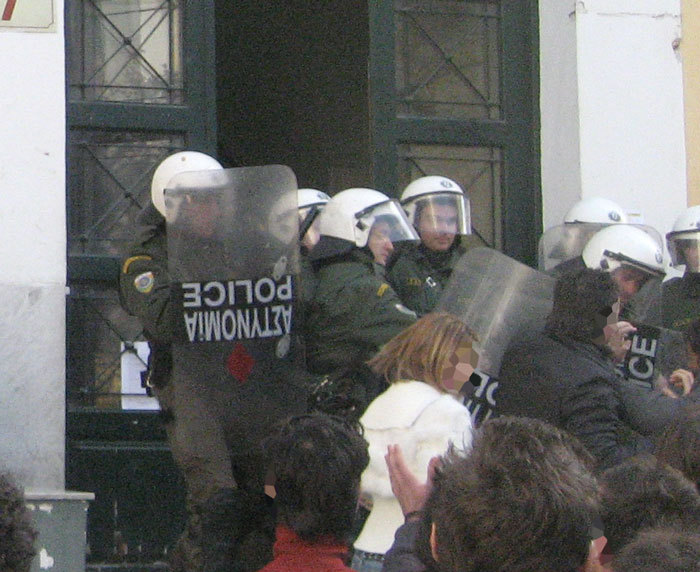 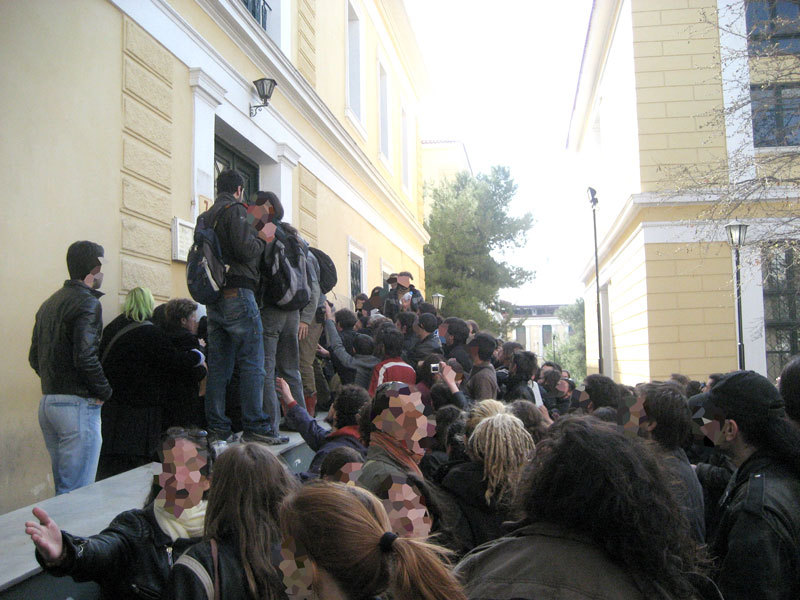 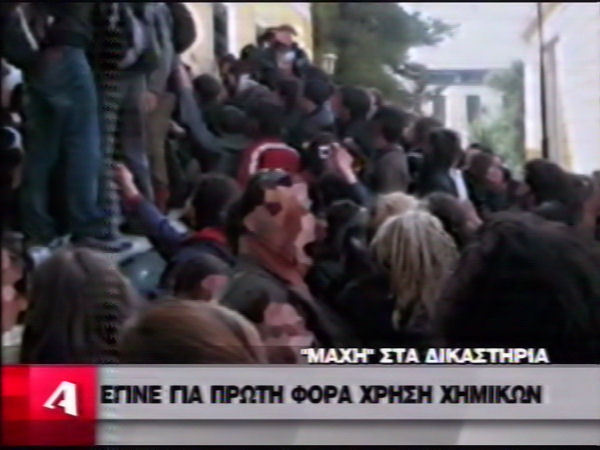