activists from 'block the builders' closed down parliament square today

shortly before midday, nine activists surprised police by locking-on in the road to lumps of concrete and a mock trident missile at parliament square today 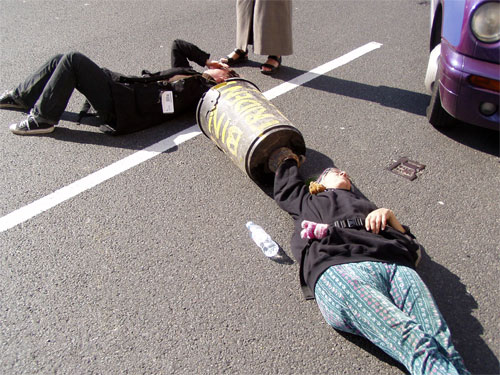 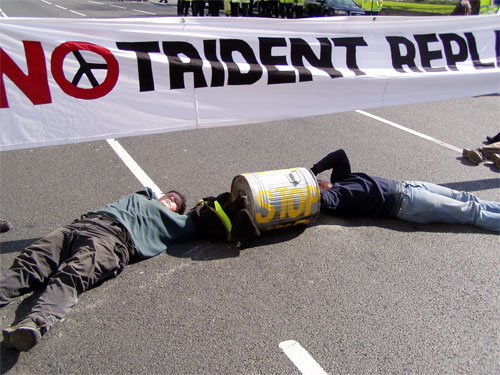 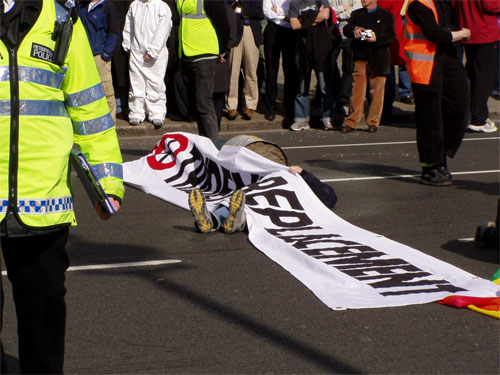 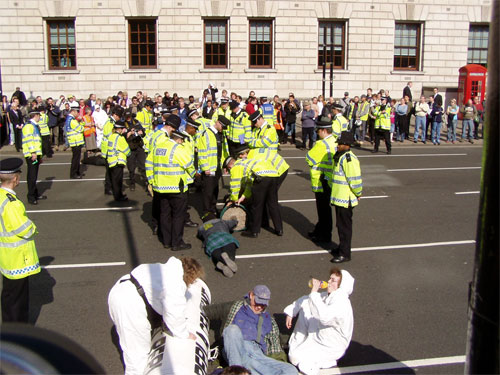 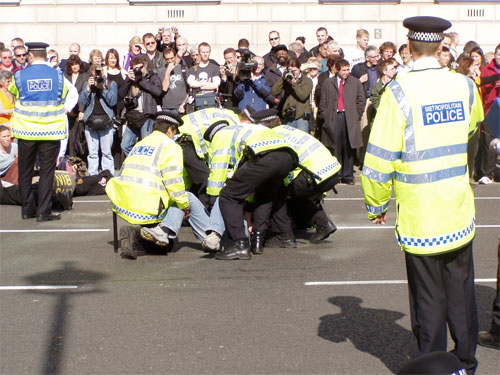 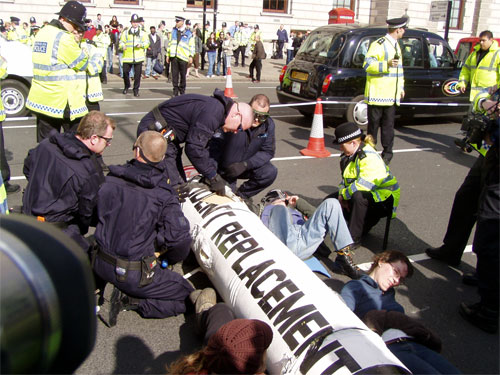 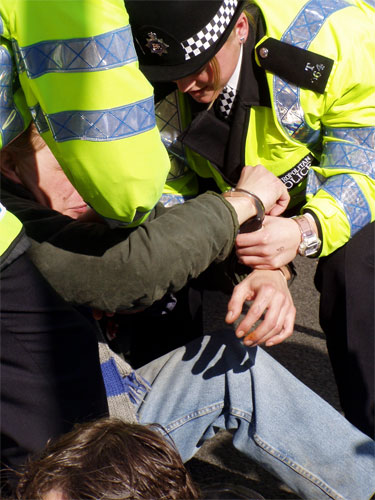 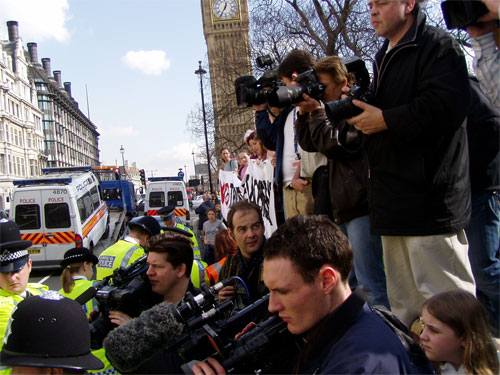 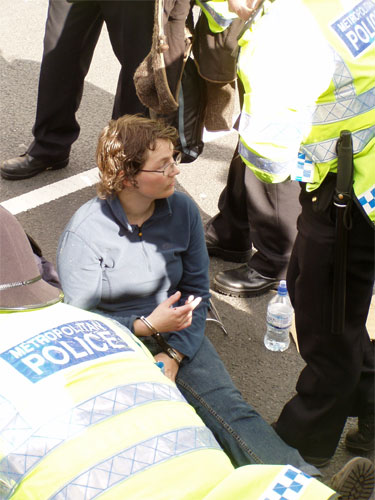 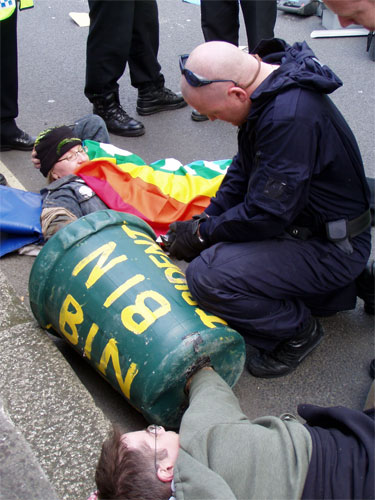 starting on the bin 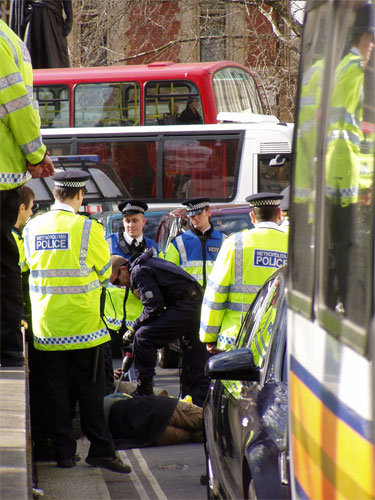 the big guns for the concrete 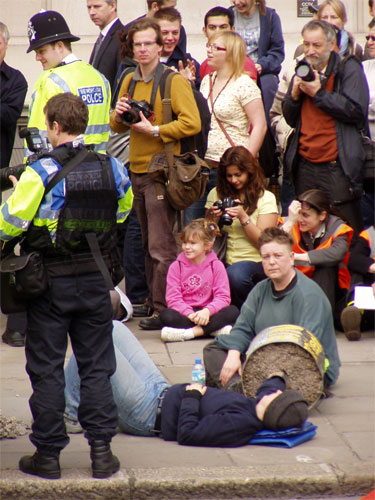 still waiting for their freedom 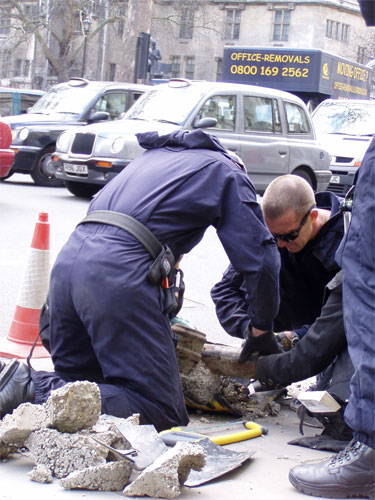 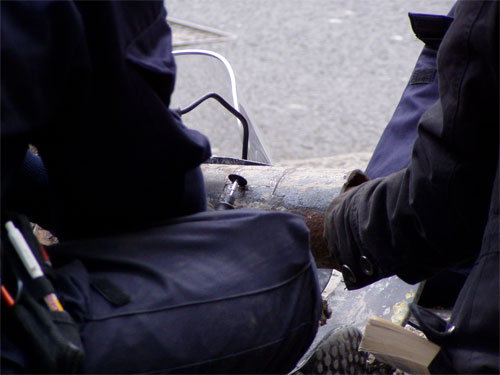 cutting thru the piping 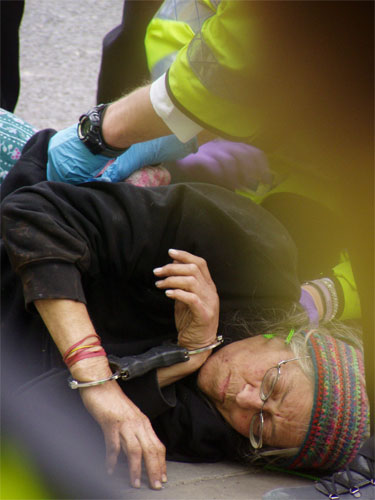 they were strewn out across the whole road while supporters held a banner 'no trident replacement'. traffic was redirected and the road cleared of vehicles, and then police moved in and, despite the risk of causing injury, manhandled the heavy blocks along with the protesters to the side of the road.

a specialist team arrived and started cutting away at the 'trident missile', while the activists were handed notices by police telling them that they were taking part in an 'unauthorised protest' under the 'serious organised crime and police act' (socpa).

after about half an hour, two lanes of traffic were opened, and the three activists attached to the missile were freed and arrested. one of them had been slightly cut on her right hand during police attempts to release her.

a huge hammer drill was used on the first of the concrete blocks. the block was moulded in a plastic bin with the painted words 'bin trident'. press were moved well away and officers blocked sight-lines. they claimed it was for health and safety reasons, but continued to allow traffic to pass by within feet of the operation.

each block took a further twenty minutes or so, and it was past four 'o' clock when the last of the protesters were removed. it is believed they are charged under the socpa legislation and for obstruction of the highway.

'block the builders' stage regular blockades at the aldermarston weapons laboratory and the next is planned for 19th march. they believe that the building work at the lab has already started for the next generation of nuclear weapons and that today's trident vote is a sham.

all 9 protesters are now charged with two offences

it's difficult to see how they could have got their demo authorised - i'm sure superintendent terry would have tried to set conditions on them once he knew of their plans - mind you, as shown in court in january, he has no more authority to impose conditions than a sewer rat. and since he's been meaninglessly authorising demos all year, it seems the police are deliberately making it impossible to comply with the legislation, which requires that the commissioner authorises demonstrations (not a lower superintendnet superpretender)

anyway, maybe this will be one of the arguments heard in court - date fixed for 29th march

short film of the action will be posted soon 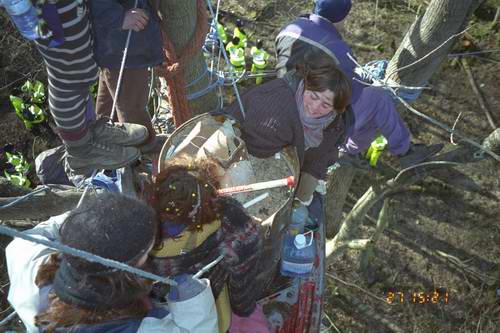 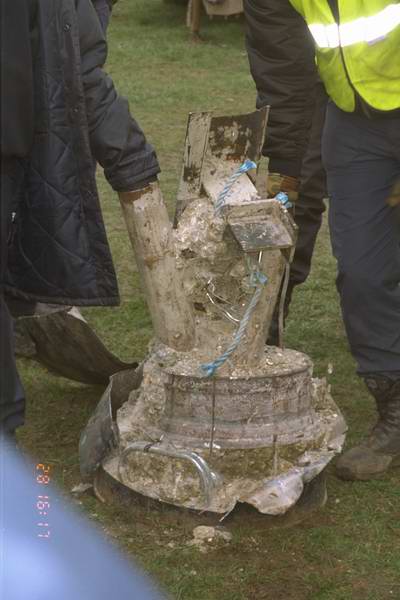 If they took only 20 mins to demolish each lockon then your concrete doesn't sound up to scratch. Don't mean to brag but a similar lock on I once built took them 6 hours to demolish with jack hammers and angle grinders. In future you need to include some metal reinforcing mesh or crinkly rebar rods, either offcuts of the proper stuff from builders skips or sawn up supermarket trolleys are ok. Including metal mesh serves not only to bind the concrete together but it spreads the shockwave from jack hammers throughout the material rather than allowing it to be concentrated at the chisel tip. Also good to include some short lengths of blue 6mm rope which prevents the forces of darkness from being able to separate the chunks of fragmented concrete which really winds them up. The other really important things are to use freshly bought cement, be sure your concrete mix is very thoroughly mixed - absolutely no sandy or cementy streaks visible - and then poured in less than 20 mins or so and when pouring it, don't do it all in one go but ram or tamp (jiggle and shake) it in thoroughly into the container in stages with the end of a bit of 4 x 2. Your concrete looks like it has voids in it which is always a considerable weakness. Good luck with future courageous actions.

forgot to say for the concrete recipe

Never ever use ordinary "building" or soft sand which is only used for bricklaying and will make very crumbly concrete indeed. You should be using all in ballast which is sharp sand already mixed with pebbles. In some parts of the country - mostly the north - you can't get this so will have to mix your own using SHARP sand and mixed size pebbles from pea size up to the size of brazil nuts or so.

I work around Westminster and had the opportunity of taking photos that day. They can be found here if anyone is interested.