1000 demonstrated against war in Gothenburg Sweden

Around a thousand protesters expressed their outrage against the British and American aggression in Iraq and Afghanistan four years after the illegal invasion of Iraq. 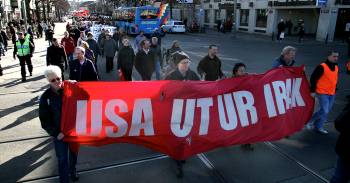 Four years have passed since the people of Iraq were freed from oppression by a jolly alliance of western troops sent to save them. Wait a minute wasn’t it to save us from annihilation by Iraqi weapons of mass destruction. Whatever, I’m sure they meant well, or at least oil well. The good citizens of Gothenburg, suffering from paranoid delusion that heroes like Bush and Blair should be on trial for war crimes, took to the streets to ungratefully protest against the anglo-American piece making expedition in the Middle East. The protesters audaciously implied that the Swedish arms industry should stop supplying, the alliance of the self-righteous, with the peace bringing cluster bombs that are such an important part of their philanthropic bullet diplomacy. This ridiculous band of protesters even had the nerve to suggest that Iran should be debarred from the obvious benefits of a friendly strafing from a well meaning invading force.

All of the thousand that took part in this demonstration against the war, myself included, should be thoroughly ashamed of ourselves as ingrates. The worst of it is that we shall probably feel obliged to do the same thing next year. At least it’s getting warmer each year. I wonder if there might be a connection somewhere.