While constituents of Siôn Simon MP talked to him in his surgery, supporters of a campaign to keep English for Speakers of Other Languages (ESOL) classes free of charge were outside collecting a petition in Erdington High St. They had a warm welcome from many local residents. 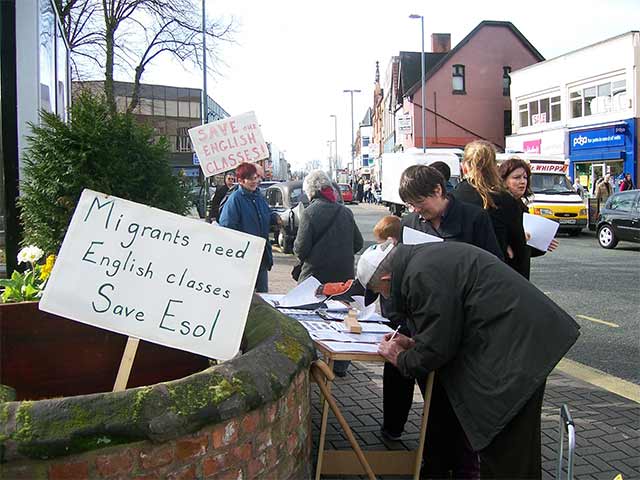 Save ESOL petition and placards

Education chiefs had decided that ESOL classes would no longer be free except to those on benefits, and that asylum-seekers could not attend further education classes in any subject during the long process of applying to stay. This plan contradicts other government declarations that it is vital for social cohesion that everyone should be able to speak English. A national campaign, supported by many community groups and trade unions, has so far brought promises that steps will be taken to allow more people access to free classes than at first planned, but the campaign continues to call for a reversal to the whole plan.

Siôn Simon is reported in the Sutton Observer as saying:
“I saw a delegation and we had a long chat about their concerns which I support – I have signed their petition. It’s the wrong way to be saving a bit of money. I have written to the minister, Bill Rammell, expressing my support for the ESOL.”

This was the latest part of the West Midlands branch of the national Save ESOL campaign, which took part in the 1000+-strong lobby of Parliament on the subject, held a well-attended public meeting which included local community and refugee organisations, and continues to lobby and write to MPs, the Learning and Skills Council, talk to the DfES, and raise public awareness of this important issue.

1. More info on the ESOL Campaign, including quotes from those affected, is available on the website www.ucu.org.uk under UCU Campaigns.