We invite you to a vigil outside the Colombian Embassy to celebrate 10 years
of the San José de Apartadó Peace Community and press for justice in the
investigation of the 21st February 2005 massacre. 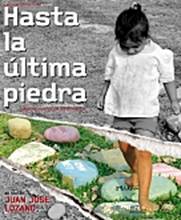 Until the Final Stone

VIGIL OUTSIDE COLOMBIAN EMBASSY
For San José de Apartadó Peace Community
Friday 23rd March from 8.30am to 9.30am

It was recently announced that 69 members of the Colombian Army are being
investigated for this crime, but there are already serious fears for the
progress of the investigation following reports that the prosecutor in charge
stepped down within days of the news appearing in the press.

Help us to make sure that this terrible crime does not remain in impunity,
and commemorate 10 years of resistance.

Come along to the Embassy, 3 Hans Crescent London SW1X OLN
(back of Harrods, Knightsbridge tube).


The San José de Apartadó Peace Community was established on 23rd March 1997,
as an alternative model of resistance to the Colombia's internal armed
conflict.

Members of the Community pledged not to participate in the conflict in any
way, and asked that armed actors from all sides - paramilitaries, guerrilla
forces and State security forces - respect their position. They demanded that
no-one with a weapon should enter the community, in a bid to protect
themselves from the aggression of all sides, and to create an alternative
model of resistance.

In the context of the Colombian conflict, such a declaration amounted to a
revolutionary act. The Community has paid a heavy price: according to their
records, there have been at least 165 murders over the last ten years,
including the infamous massacre of 21st February 2005, where 5 adults and 3
children were killed, allegedly by members of the Colombian Army.

Yet against incredible odds, the Peace Community has survived.International
solidarity is growing, and this year, we invite you to celebrate this
creative act of resistance with us.

We will be showing the video "Hasta la Ultima Piedra" ("Until the Final
Stone"), a history of the San José Peace Community, introduced by June
Holmes, an ex-Peace Brigades International volunteer who accompanied the
Community during 2004-6, and who can take questions afterwards.

We are also hoping to host a performance of spoken word poetry by Don Popo, a
Colombian poet whose work includes reflections on the conflict, and stories
from Cacarica, where other Colombian communities are rejecting the model of
armed conflict through their creation of Humanitarian Zones.

Please come along. Future Colombia Solidarity Campaign London Branch meetings
will be on Monday 23rd April, 21st May, 18th June, 16th July all at 7.30pm at
the Apple Tree (see on map