Earlier this month hundreds of protesters gathered at demonstrations at the Asylum & Immigration Tribunal and Enforcement Units in Manchester , Glasgow and beyond.
7 further demonstrations around the UK will take place on Wednesday March 28th.
In a few months there will be a Country Guidance tribunal to challenge the Home Office official report on the DRC that says there is no risk to failed asylum seekers forcibly returned to Kinshasa . It's not true and means that many people are being sent back to the Congo to face imprisonment, torture and other ill-treatment. If the tribunal is won, it could mean that further deportations are suspended. Please come - show your support. Demonstrate with us on 28 March !

7 Demonstrations Against Deportations to DR Congo

This will be a joint protest with UNITY: In memory of Uddhav Bhandari, an asylum seeker from Nepal , who in desperation set himself on fire 07.03.07 and died from his injuries 19.03.07

And in support of Max Waku and his family taken on Monday from their house and the Aksu family who have been in detention for a month.

Organised by Congolese Community of the North East.

March to :
The Peace Gardens
off Lloyd Street
(behind the Town Hall)
Manchester M1

Some Congolese asylum seekers are detained in prisons like HMP Strangeways because they were caught working and paying tax "illegally" - left homeless and destitute by the UK 's cruel asylum system, they had no choice to survive.


Organised by Congolese communities in Manchester , Leeds, Bradford and beyond, including the Stop Deportations to the Congo Campaign, Congo Support Project and others.

Members of the West Yorkshire Congolese community have also called for a vigil outside Waterside reporting centre on Kirkstall Road in Leeds from 11am-1pm on 28th March. All very welcome, bring banners and friends. 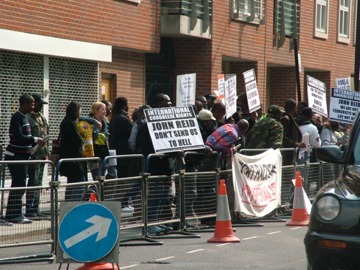 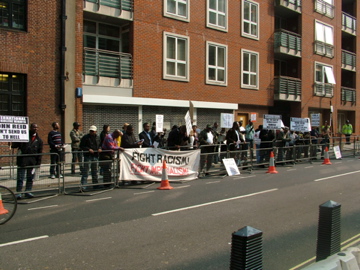 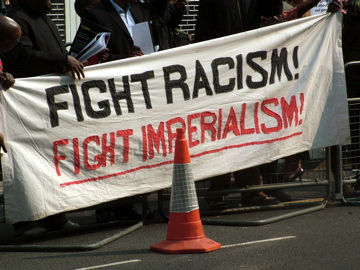 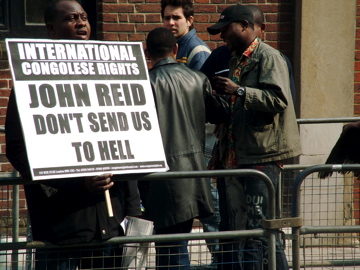 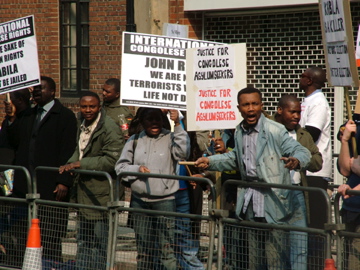 I went along at about 12.30 but there weren't many people there. When I returned just after 2pm it was busier with more singing and chanting. There was about 30 people there, along with 5 vans of police, most of whom were sat in the vans looking pretty bored.

My camera was playing up and the pics have come out really small, but you can grab the originals at