Warmongers hang out in Washington DC: Helen Clark visits the US

As the fifth year of the occupation of Iraq approaches, the United States is busily re-evaluating its military strategy there and elsewhere. On the eve of Helen Clark's visit to the US, will the Labour Government take the opportunity to re-evaluate New Zealand's military relationship with the Bush administration? 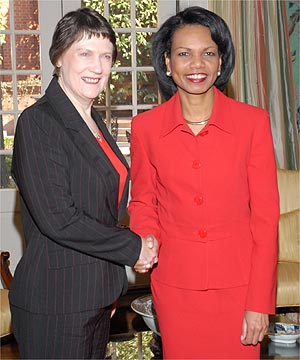 Helen Clark visits the US

Many New Zealanders are under the impression that the troops here did not participate in the war in Iraq. Similarly, many believe that the NZDF is carrying out 'reconstruction' work in Afghanistan. These are very well executed pieces of government propaganda.

In reality, New Zealand has maintained strong ties with the US military and these ties are being strengthened under the guise of 'peacekeeping' and 'fighting terrorism.'

Phil Goff's recent revelations about the role of the SAS in Afghanistan should be cause for serious concern. Some 70 Afghani people were turned over to the US military where they awaited imprisonment, interrogation and possible torture. At the time, neither Goff nor Clark were particularly concerned about NZ troops being under US command. They were not concerned that the SAS could well be aiding and abetting grotesque human rights abuses. They were only interested in being on the side of the US, or as Bush puts it, being 'with us' as opposed to 'against us.' With the award of US Bronze Stars to the SAS soldiers, it seems that NZ's has secured a position with them.

Only this week, Helen Clark announced that the New Zealand military contribution to Afghanistan is being extended for a further year to September 2008. The NZDF has now been there for 6 years, ostensibly as 'peacekeepers.' But whose peace are they keeping? The government freely admits that this deployment — of a so-called 'Provincial Reconstruction Team' — is to extend the power of the central government in Kabul to the provinces. If you read between the lines, the reality of this means extending the power of a US-puppet government, and by extension, US control.

The continued presence of NZ troops in Afghanistan is the tangible manifestation of strong links with the US. Less obvious, but more lethal links are provided by the two spy bases that operate on NZ soil – one at Waihopai (near Blenheim) and the other at Tanigmoana (near Levin). The agency that operates these bases, the Government Communications Security Bureau, is effectively an extension of the US National Security Agency. They intercept satellite communications – telephone, email, faxes – 24 hours a day, 365 days a year based on a data dictionary of key words dictated by the US. These two spy bases are part of the global ECHELON network that feeds information to the US military.

Bearing these relationships in mind, it is important to remember that the invasion of both Iraq and Afghanistan have been devastating, horrible and unjust. They have caused the deaths of literally hundreds of thousands of people. At last count, the British medical journal, The Lancet, estimated that 655,000 Iraqi people were dead because of the war. This is on top of the of two million that died in 12 years of UN-imposed sanctions to the start of the 2003 invasion.

The Labour Government is keenly interested in maintaining the appearance of an ethical foreign policy. Nothing could be further from the truth. They have simply mastered the art of spin doctoring. Publically, they proclaim a commitment to peace and justice throughout the world, while behind close doors, or more accurately, in far away places, they wage wars.

In 2003, New Zealand soldiers went to Iraq. The government told us that this was to carry out 'reconstruction work.' At the time, there was very little dissent within NZ to this deployment. Four years later, most people would deeply oppose any NZ soldiers going to Iraq. What is different? The US administration can no longer hide its blatant greed and brutality. Many people believed that it was valid to send troops to build schools and restore water services. The government did not say that the rules of engagement for these troops meant that they could shoot-to-kill to protect coalition property. Again, the reality behind the propaganda was that these troops were propping up the occupying armies – the US, the UK and Australia. Meanwhile, they were taking jobs away from local Iraqi people desperate to start reconstructing their own lives.

We deserve better than complicity with war mongers. The people of Iraq and Afghanistan deserve nothing less than New Zealand's complete disengagement with the US military machine. When Helen Clark visits Washington next week, perhaps she should put this on the agenda.