This afternoon a group of around thirty anti-slavery protesters marched through Oval en route to Brixton demanding an official apology from the British Government. 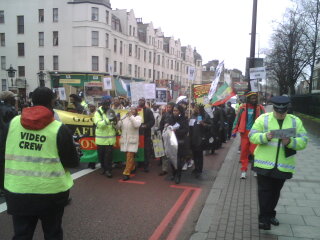 This afternoon a group of around thirty anti-slavery protesters marched through Oval en route to Brixton demanding an official apology from the British Government over Britain's involvement in the slave trade. Despite repeated calls for an apology, the Government has only so far expressed "sorrow" for what for some is stopping short of an apology.
The protesters also called for reparations to be made to help narrow the gap between the black communities and the rest of society. They said that by avoiding an apology, the Government can avoid reparation payments.
The group marched peacefully down Brixton road with a nearly equally-sized police escort. The protest caused disruption to the traffic, with tailbacks reaching down Brixton road.