How many cops does it take to police a Tea Party?

Fifty people attended a Tea Party outside the gates of the Faslane Nuclear Base in Scotland. Tea was served in china cups and saucers. A table displayed vegan scones, cucumber sandwiches and cakes. Local residents were invited to share tea with activists and discuss how to disarm Britians Trident Weapons of Mass Destruction. 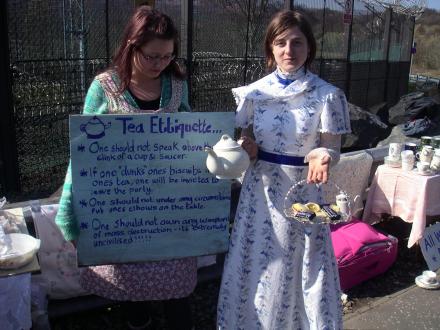 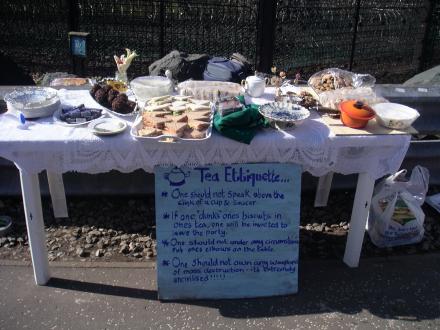 How many cops does it take to police a tea party?...Twenty Six Apparently.

A small group of disarmament activists travelled from Brighton to hold a Tea Party at the Faslane Nuclear Base in Scotland. An invitation was sent out to local residents around the base who have been disturbed by the recent string of road blockades which have been part of the Faslane365 campaign*. The Invitation read "We would like to cordially invite you to a Tea Party full of sophistication, poise and wisdom. We hope to talk with you and test the old english conviction that any problem can be sorted out with a nice cup of tea".

The Tea Party was set up on the pavement outside the base and a table displayed an elegant array of vegan scones, cucumber sandwiches and cakes. Fifty guests arrived from Glasgow, Helensburgh and all over Britain. Bemused passers by witnessed permanent residents of the Faslane Peace Camp** dressed in their finest gloves and hats, sipping tea from china cups and saucers. Old gowns were worn and live guitar music entertained. The tea party hosts said "We wanted to counter the barbarity of nuclear weapons and show these uncivilased weapons of mass destruction the proper way to behave".

Peace activists and local residents alike, looked on with laughter as twenty six police officers arrived to 'police' the event. They formed a line across the gates to the base, creating their own blockade of the previously unobstructed entrance. After hungrily watching cakes being eaten, they made the rule that no one could cross the road. The guests continued to ignore them and after three hours stood in a line they left.

Fun was had by all.

* Faslane365 is the campaign to continuously blockade the Faslane Nuclear Base for a year. www.faslane365.org
** Faslane Peace Camp has been located outside the Scotish Nuclear Base for coming up to twenty five years. It has been witnessing and campaigning for peace, making it the longest standing protest site in the UK.

Look, there is an important lesson here that folks trying to conduct campaigns using tactics of non-violence need to consider.

a) It was DIFFERENT. The cops came prepared to deal with the LAST form of action. That made them look ridiculous precisely because inappropriate for THIS form (obviously 1-2 cops quite sufficient).

b) EXCEPT -- they didn't KNOW. After all, the "tea party" COULD have been a fake out. If there HAD been only 1-2 cops, at a given signal, the tea party attendees could have rushed the gate. An important "rule of war" --- you can't plan a defense based just upon supposed knowledge of the opponents intentions but have to consider the opponents capabilities.

Incremental escalation is a BAD idea when trying to run a campaign using tactics of non-violence. Makes to far too easy for your opponent to adjust. You need creativity and flexibility.Keep your opponent off balance by coming next time with an approach that can make what your opponet HAS been doing to counter you absurd.

IGNORE those gray faced serious types who criticise you for "not being serious". They do NOT understand how to win a campaign of non-violence (or have unrelated agendas).

Great, or should I say "Marvellous!"

This is a wonderful idea, much like NOT CRICKET (a London bunch of similarly inclined posh fools). And I think the previous commenter put it well, especially given that the previous group glued themselves together, which wound the police up no end. Escalation is a great tactic for motivating both police and protesters. Having a bit of fun in an easily accessible fashion is a great tactic for drawing in the general public.