Don't take part in this illegal war Harry! If you take a stand against it milions will respect you...... Chelsy Davy, Prince Harry's girlfriend, senses what many people in my town are saying, but dare not print, that Harry could be killed like his mother is believed to have been. For political reasons and to divide the Arab and European peoples. 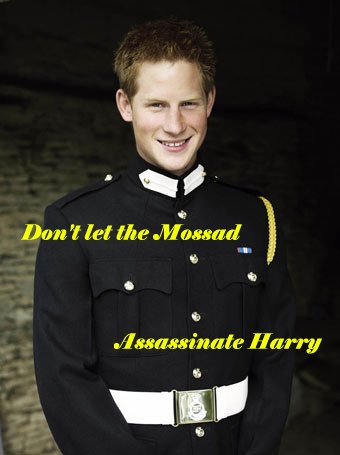 TROUBLED Prince Harry was clearly showing the strain early yesterday after appeals from his girlfriend not to go to Iraq.
In the final weeks before the young soldier is posted to the front line, Chelsy Davy has told him that she cannot cope with the length of time they spend apart.
And at 3am the tension of heading for the most dangerous place on earth – and risking losing the love of his life – proved too much.
The Prince emerged unsteadily from his favourite London nightclub and lunged at a photographer before taking a tumble. The Prince had been drowning his sorrows at Boujis in South Kensington as details of the rift with Chelsy, his girlfriend of two years, emerged.
He was out on the town with television presenter Natalie Pinkham, 28, who has earned the reputation of being one of Harry’s “favourite drinking buddies”.
But things turned nasty when the Prince, 22, wearing jeans and a brown jacket, left the club.
Harry has told Chelsy that he will spend plenty of time with her once he returns from his tour of duty.
Looking angry and unsteady on his feet, he was obviously in no mood to face the usual scrum of photographers waiting outside.
He singled out one for particular attention, lunging at him and following him along the street until he was gently guided back to a waiting car.
Harry looked in need of the help of his Royal Protection Officer as the two made their way to the car. But even that steadying influence was not enough to keep him upright and he fell to the ground.
One onlooker said: “He looked upset and unsteady on his feet as he left the club and the presence of the photographers just seemed to set him off. He was simply not in the mood and his face was like thunder.”
Known for his fondness for the party scene, this latest unseemly behaviour comes as Harry is undergoing the final weeks of training before his deployment to Iraq with his regiment the Blues and Royals.
It is his imminent departure which is said to have caused the problems with Chelsy, although they have spent much of their time 6,000 miles apart.
The couple were overheard having a heart-to-heart in the Pimlico restaurant Como Lario during her last visit to London from her base in Cape Town. Chelsy, 21, told him she is not sure if she can cope with any more of his prolonged absences.
A fellow diner said: “At one point Chelsy looked close to tears and told Harry ‘I really don’t want you to go to Iraq. How much longer is this Army thing going to go on? There’s not much in it for me, is there?’”
Although these are testing times for the pair, they will be able to console each other when Chelsy flies in for Harry’s send-off at the Polynesian-themed Mayfair club Mahiki.
Cornet Wales is also expected to take Chelsy on an exotic holiday during the three weeks’ leave he has been granted before being posted to Iraq.
He will also be hoping that the two weeks’ leave he has been granted in the summer to attend the tribute concert to his late mother Diana will help to mend the relationship.
Harry has, say friends, tried his best to reassure Chelsy that he will be able to spend plenty of time with her once he returns from his six-month tour of duty. She, meanwhile, is busying herself with finding a flat in London to move into this September.
But it seems that all the uncertainty at this tempestuous time in their young lives all became a little too much for Harry in the early hours.


surfing through this tonight

Don't be daft.
23.03.2007 23:46
Al Quaeda will be taking good care of him, and are far more likely to make strenuous efforts to take out the rest of the family to change the line of inheritance. The people trying to do him in are likely to permanantly be in London. Guess who that is. Probaly trying to make out to both Shia and Sunni that he has developed sympathy with the other lot.
Pershmergera

references for the above comments