M1 Activists Go Down To The Yard

Local residents concerned at plans to increase congestion and pollution on the M1 have paid a visit to one of the Climate Criminal Organisations involved. They stop work at the site near Mansfield for a morning and then pop home for a late breakfast. 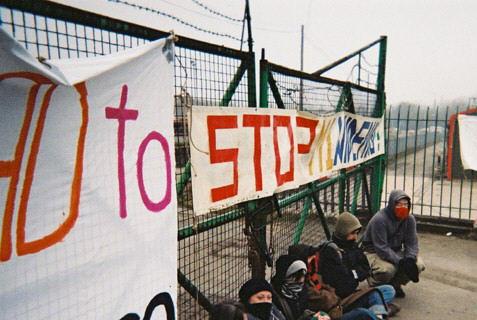 Up Close And Personal 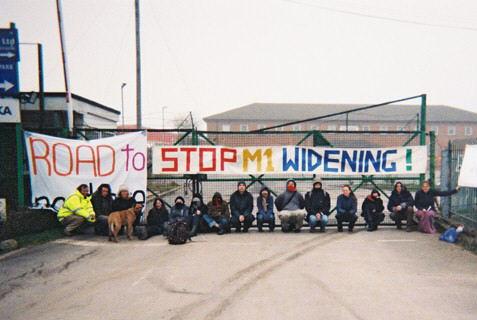 Today, a group of local residents, inspired by last year's Camp for Climate Action at Drax power station, but dismayed at plans to increase congestion and pollution on the M1, have visited Jackson's yard in Sutton in Ashfield, near Mansfield. The citizens locked the gates shut and hung a variety of banners giving the clear message that Jackson's contribution to a worsening environment was not welcome.

Jacksons are heavily implicated in the ridiculous plans to increase congestion and pollution on the M1 by widening it into four lanes in each direction - their main focus is the area around junctions 31 and 32. Until recently, the yard, on Coxmoor Road, also housed a dodgy Scandinavian outfit called Skanska. These clowns are even deeper in the mire; in asscociation with Balfor Beatie they are engaged in work from the M25 to Luton.

Given that Blair's government is thoroughly in the pocket of big business, it should be no surpise to anyone that recently, when Roads Minister Stephen Ladyman was churning out the same old lies about road widening for the Nottingham Evening Post, he repeated almost word for word parts of the Skanska website's M1 page!

Clearly, the sensible response to traffic congestion would involve investment in public transport and increased use of the railways for frieght. However, since these solutions are unlikely to make much profit for Blair's friends in big business, we are all left choking on the fumes generated by a massively expensive white elephant. The Government is
giving your money to climate criminals and profit terrorists, whilst claiming to take climate change seriously - the time has come for sane and moderate people everywhere to take a stand against this madness.

Maybe the Police are starting to get the idea too - they turned up, but then went away again, allegedly due to a staff shortage.